Today’s guestbook entry is from April 27, 1908, when Simon Newcomb made a visit.

Next to his name Simon Newcomb (1835-1909) wrote, “Professor U.S.N. [United States Navy], Washington D.C.”  He was an astronomer and mathematician who served as the director of the National Almanac Office and later as a professor of mathematics and astronomy at Johns Hopkins University and in the U.S. Navy. 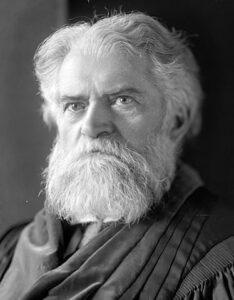 Among his astronomical contributions, he was primarily interested in celestial mechanics, planetary motion, and improving navigation.  He published a book on ephemerides, entitled Tables of the Sun, that became the official international standard basis for related astronomical constants.  He corrected a table of lunar positions by incorporating data going back to 1672.

He also made a few other contributions. He collaborated with Albert Michelson (of Michelson-Morley fame) to measure the speed of light. He used the small Chandler wobble effect to estimate the elasticity of the Earth.  He also dabbled in statistics, economics, and other fields.

He is the author of the science fiction novel, “His Wisdom the Defender”

There are lunar and martian craters that bear his name, as well as the asteroid (855) Newcombia.

He was also a bit odd. He is said to have sabotaged the career of the philosopher C.S. Peirce, and he served as the first president of the American Society for Psychical Research (but as a skeptic).