Today’s guestbook entry is from April 6, 1912, when Stanislas Meunier made a visit. 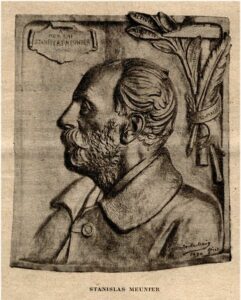 Next to his name, Stanislas-Étienne Meunier (1843-1925) wrote, “Muséum Paris.”  He was the chair of Geology at the Muséum National d’Histoire Naturelle (MNHN) in Paris, France.

He also introduced experimental geology as a distinct field of science. He contributed much to our understanding of the geology of the Paris Basin.