Since its founding in 1891, many people have passed through the doors of the Vatican Observatory.  A quick perusal of our guestbook reveals several Names, including Popes, nobel laureates, astronauts, actors, and saints.  This is the first post in a new series that will highlight some of these notable visitors. 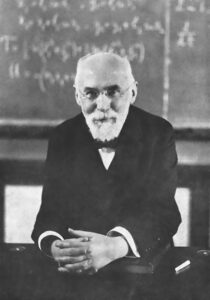 First, he developed a theory to explain the Zeeman effect; i.e. the splitting of spectral lines in the presence of a strong magnetic field.  The splitting is due to the effect of the magnetic field on the energy levels of the two spin states of the two electrons that occupy one atomic orbital.  The effect is useful for determining the strength of a magnetic field in astrophysical sources. For this, he and Pieter Zeeman (who discovered the effect) received the Nobel prize in 1902.

The second significant contribution is the coordinate transformations that one finds in Einstein’s relativity theory, known as Lorentz transformations.  Anyone who has done a basic course in special relativity will be familiar with the Lorentz factor

that one finds in all of these coordinate transformations.

There is a lunar crater named Lorentz after him.