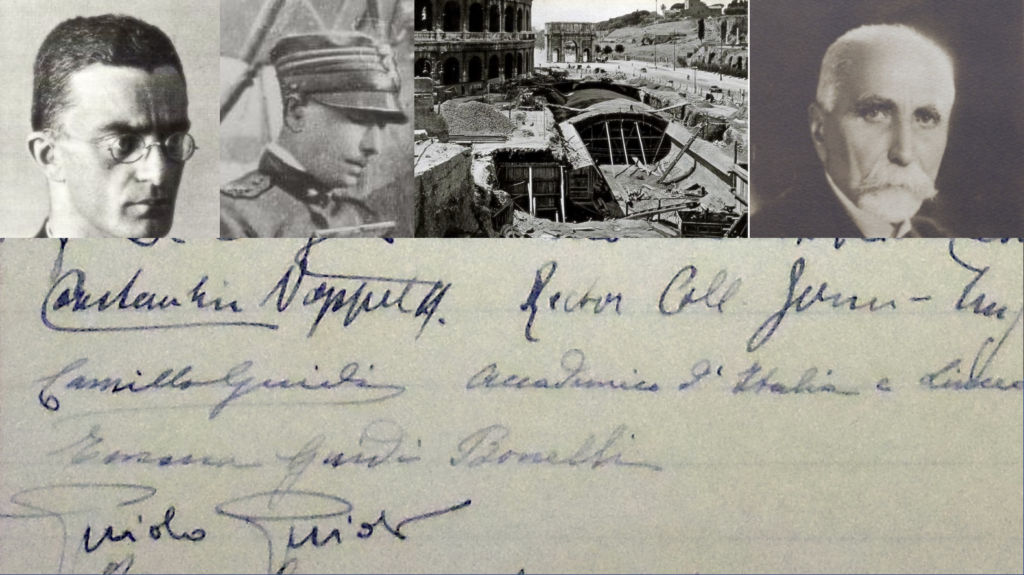 The Vatican Observatory has hosted thousands of visitors over the years. Among those who have signed our guest book, one can find Popes, Nobel laureates, authors, astronauts, and saints. Today’s entry is from August 13, 1935, when Constantin Noppel, Camillo Guidi, and Guido Guidi made a visit.

Next to his name, Fr. Constantin Noppel S.J. (1883-1945) wrote, “Rector Coll[egium] Germ[anicum] – [et] Hung[arium]”. He was the rector of the Germanicum from 1932-1935. He is particularly known for his work with youth ministry and the Catholic charity Caritas. He had been president of the Catholic Young Men’s Association in Munich before coming to Rome. He was a pacifist and outspoken critic of the Nazi regime.

Next to his name, Camillo Guidi (1853-1941) wrote, “Accademico d’Italia e Linceo Pontificio”. He was an engineer and materials scientist who specialized in construction.

He was director of an experimental laboratory of construction materials at the Royal Engineering School of Turin.

His major contribution was in the study of elasticity of materials used in construction.

Guidi was accompanied on the visit by Emma Guidi Bonelli, for whom I was not able to find any information.

He was also accompanied by his son, Guido Guidi.

In 1922 he became the first director of the Experimental Center of the Royal Air Force at Montecelio field, where (among other things) he test-flew captured Austrian and German airplanes.

After that, he designed seaplanes in collaboration with Fiat in Pisa.

After the Second World War, his attention switched to civil engineering. He designed the tunnel at the Colosseum metro station in Rome. He also designed the ticket booths (later destroyed by fire) when the Roma Termini train station was rebuilt in 1950.