Today’s guestbook entry is from December 13, 1910, when Maurycy Rudzki made a visit. 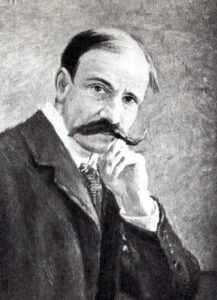 Rudzki was a geophysicist who directed the department of geophysics and meteorology at Jagiellonian University in Krakow, Poland. He was the first person to be formally called a professor of geophysics.

He established the first seismological observatory in Krakow, and in 1904 started the bulletin, Resultate der meteorologischen, seismologischen und magnetischen Beobachtungen an der k.k. Sternwarte in Krakau.

His research included seismology, oceanography, meteorology, and cartography.  In geophysics, his research focused on elastic anisotropy as it pertained to the propagation of seismic waves.