Today’s guestbook entry is from December 16, 1912, when Charles L. Doolittle made a visit. 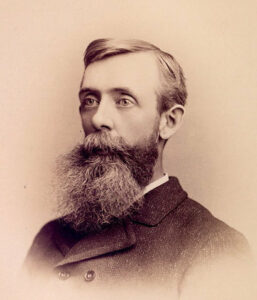 From 1875-1895, he was a professor of mathematics and astronomy at Lehigh University, operating the Zenith telescope at Sayre Observatory. In 1895, he became director of the Flower Observatory at the University of Pennsylvania.

He retired in 1912, the year of his visit to the Specola. One might imagine that he used the opportunity of his retirement to travel abroad and visit colleagues at other institutions (such as the Vatican Observatory).

Charles Leander Doolittle was the father of the accomplished poet Hilda Doolittle, who published under her initials H.D. and was friends with figures such as Ezra Pound and Sigmund Freud.