Today’s guestbook entry is from December 29, 1908, when Dorothea Klumpke made a visit. 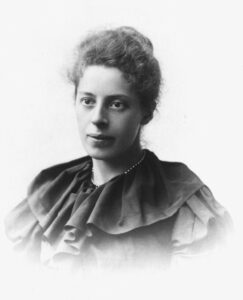 She was an astronomer at the Paris Observatory who became the Director of the Bureau of Measurements.  She was one of the key participants in the Carte-du-Ciel program.  Her research involved astrophotography, measuring star positions, stellar spectroscopy, meteoritical research, and eclipse expeditions.

With her late husband Isaac Roberts (also a notable astronomer, who died in 1904), she had photographed all 52 of the nebulae recorded by Herschel.  Her publication of the atlas of these objects in 1929 earned her the Hèléne-Paul Helbronner prize from the French Academy of Sciences.

She endowed the Klumpke-Roberts Award for contributions to the public understanding and appreciation of astronomy, which is still awarded annually by the Astronomical Society of the Pacific. (Chris Impey, friend of the Vatican Observatory, received the award in 2016.)  She also endowed the Prix Dorothea Klumpke-Isaac Roberts for the study of nebulae, which is awarded biannually by the French Academy of Sciences.

She received several honors, including the French Legion of Honor.  Two asteroids are named for her: (339) Dorothea and (1040) Klumpkea.