Today’s guestbook entry is from July 11, 1910, when Anne Sewell Young made a visit. 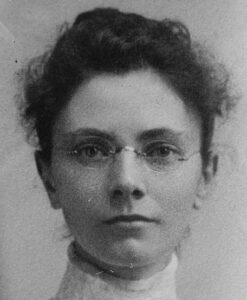 After finishing an M.S. at Carleton College, Young came to Mount Holyoke College in 1898 where she became director of the John Payson Williston Observatory. Meanwhile, she completed her Ph.D. from Columbia University in 1906.

Her astronomical research involved many fields: her Ph.D. was a survey of stars in the constellation Perseus. She also supervised research on sunspots and a student expedition to observe a solar eclipse in 1925. Her primary interest was variable stars. She was a founding member of the American Association of Variable Star Observers and became its president in 1923.