Today’s guestbook entry is from July 21, 1911, when Joel Metcalf made a visit. 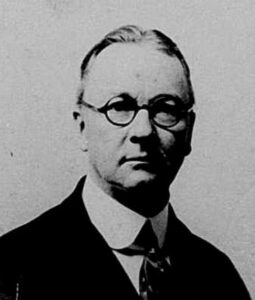 Next to his name, Rev. Joel Hastings Metcalf (1866-1925) wrote “Winchester, Mass.”  He was a Unitarian minister and an avid amateur astronomer who specialized in hunting asteroids and comets.

Between 1905 and 1914, he discovered 41 asteroids and several comets. He was a member of the visiting committees of the Harvard Observatory and the Ladd Observatory (Brown U.)

The asteroids 726 Joëlla and 792 Metcalfia (both among the 41 he discovered) are named for him, and several of the comets he discovered also bear his name.