Today’s guestbook entry is from June 21, 1911, when Robert S. Woodward made a visit. 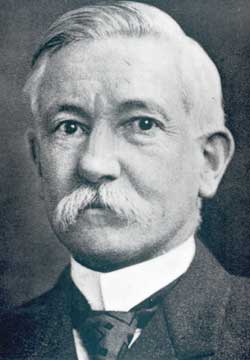 From 1884-1890, he was an astronomer for the U.S. Geological Survey. From 1890-1893, he served in the U.S. Coast and Geodetic Survey, during which he developed an inexpensive technique that improved how base lines are established. Following that, he was a professor of mechanics and mathematical physics at Columbia University until 1905, when he became the second president of the Carnegie Institution (after Daniel C. Gilman). During his tenure, the scientific reputation of the Carnegie Institution grew.

[Note: As far as I can tell, Robert Simpson Woodward is not related to Robert Upshur Woodward, the journalist for the Washington Post who reported on the Nixon Watergate scandal.]