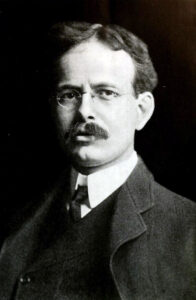 The year prior to his visit, he used the Zeeman effect–(see the previous post on H. A. Lorentz)–to discover magnetic fields in sunspots.

He also found that, between sunspot cycles, the magnetic polarity of fields through sunspots in northern vs southern hemisphere switches orientation – what is today known as Hale’s Law (or the Hale-Nicholson Law).

In 1913, Hale advised Albert Einstein of the possibility of observing the effects of general relativity on starlight passing near the Sun, which he suggested might be possible during a total solar eclipse.  This led to the eclipse observing expeditions of Arthur Eddington and others in 1919 that confirmed this aspect of relativity theory.

The reputation of the California Institute of Technology (aka Caltech) as a leading research institution also started largely due to the work of George Hale.

There are craters on the Moon and Mars that bear his name as well as the asteroid (1024) Hale, and the terrestrial mountain Mount Hale in the Sierra Nevada range.