Today’s guestbook entry is from May 10, 1912, when Frederick Seares made a visit. 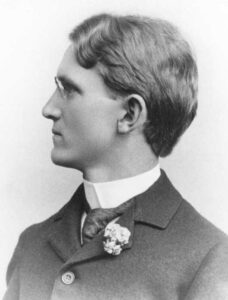 Next to his name, Frederick Hanley Seares (1873-1964) wrote, “Mount Wilson Solar Observatory, California.” He had been at the observatory since 1909, and would remain there until 1945.

Seares researched a number of areas of astronomy, including variable stars, comets, and galaxies.

One of his most significant astronomical contributions is the establishment of standards for the system of stellar magnitude and its extension for stars beyond 18th magnitude.

He also studied the relative brightnesses of spiral nebulae (galaxies) compared to the Milky Way, and the attenuation and reddening of starlight passing through interstellar gas and dust.

He was elected president of the Astronomical Society of the Pacific in 1929, and was awarded the Society’s Bruce medal in 1940.

There is a crater named for him on the Moon, as well as the asteroid 11766 Fredseares.