Today’s guestbook entry is from May 12, 1910, when Benjamin Baillaud made a visit. 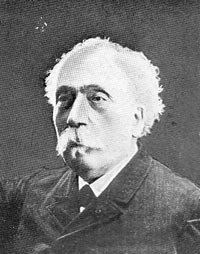 Next to his name, Édouard Benjamin Baillaud (1848-1934) wrote simply, “Paris.”  This was his first of several visits to the Vatican Observatory over many years.

Baillaud was the founding president of the International Astronomical Union in 1919.

He was also the founding president of the International Time Bureau.  He was responsible for the time signal broadcast from the Eiffel Tower.

There is a crater bearing his name on the Moon, as well as the asteroids 1280 Baillauda and 11764 Benbaillaud.