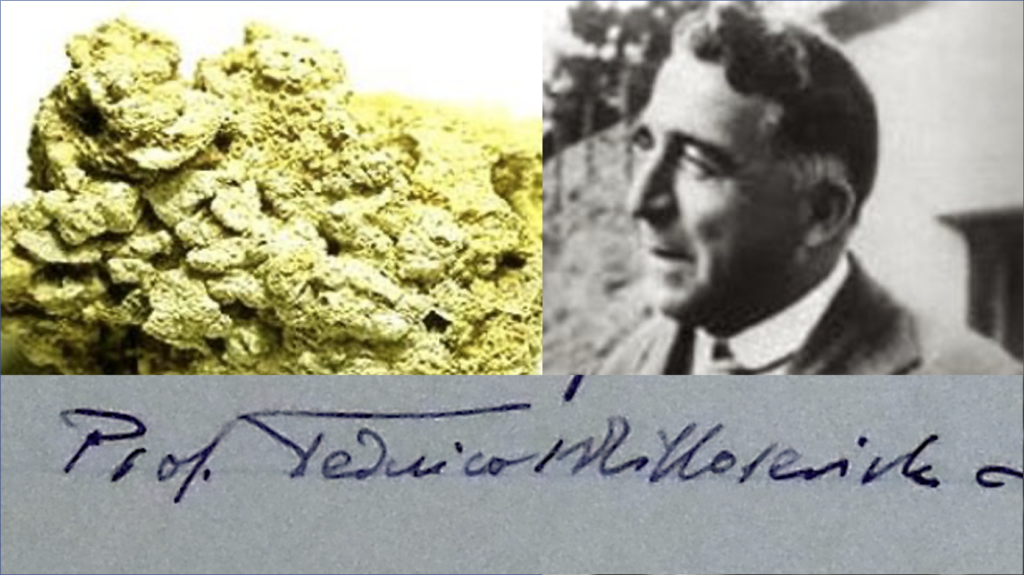 The Vatican Observatory has hosted thousands of visitors over the years. Among those who have signed our guest book, one can find Popes, Nobel laureates, authors, astronauts, and saints. Today’s entry is from May 9, 1935, when Federico Millosevich made a visit.

Next to his name, Senator Federico Millosevich (1875-1942) wrote, “Direttore dell’Istituto di Mineralogie della R. Università, Roma.” [Director of the Institute of Mineralogy of the Royal University of Rome]. He was a mineralogist and politician who served in the Italian senate.

He visited the Observatory along with three Jesuits, including (not-yet-Cardinal) Augustin Bea, who will be the subject of another Specola Guestbook entry.

He was the son of astronomer Elia Millosevich, who directed the Observatory of the Roman College from 1902-1919.

From 1906 to 1909 he was a professor of mineralogy at the University of Sassari, then took a chair of mineralogy in Florence. Then, in 1913, he came to the university in Rome.

His political life took off in 1925, when he became Inspector General of Mines for the Ministry of the Economy. He became rector of the Sapienza University in Rome in 1927, and in 1934 was named to the Italian Royal Senate. He served as president of the Italian Commission on Africa from 1941 until his death in 1942.

In 1935 he formed a new Institute of Mineralogy at the University of Rome.

He was president of the Accademia dei Lincei (Academy of the Lynxes) from 1938-1939.

In mineralogy, he is honored with a mineral named for him. Millosevichite is an aluminum sulfate (Al2(SO4)3) that occurs in volcanic environments, but is also found in burning coal dumps.