Today’s guestbook entry is from October 11, 1909, when Eduard Study made a visit. 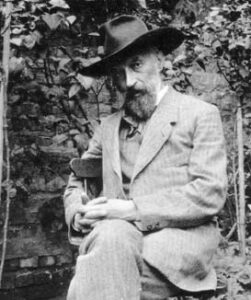 Eduard Study was a mathematician who made significant contributions in the field.  At the time of his visit, he was a professor of mathematics at the University of Bonn.

His contributions include the associative algebra of dual quaternions, kinematics, hypercomplex numbers, and, pertaining to quantum chemistry, a theory governing the coupling of angular momenta (that also applied to electron spin couplings).

At least two mathematical concepts bear his name: Study quaternions (aka semiquaternions) and the Fubini-Study metric.