Space Week 2017 and Science Week 2017 merged in a flurry of drawing workshops. Hundreds of children took part in  Spectacular Cassini at Saturn. The workshop was of course inspired by the sublime images taken by the spacecraft as well as telling the story of the mission.

Because I could not go to a shop and buy a Cassini spacecraft or a Huygens probe I made my own models.  Saturn and is rings was also part of my project so I made a model that could fit in my car.  It had to be light  and looked reasonably like the planet itself.  In my experience having a model of the subject in the classroom really helps to engage  children in the subject.

In almost all of the workshops the children  asked to hold the spacecraft. That was fine with me but resulted in the communications dish , main engines and thrusters  falling off from time to time. A repair kit of glue and replacement parts became part of the many boxes  in my  car during the months of October and November. 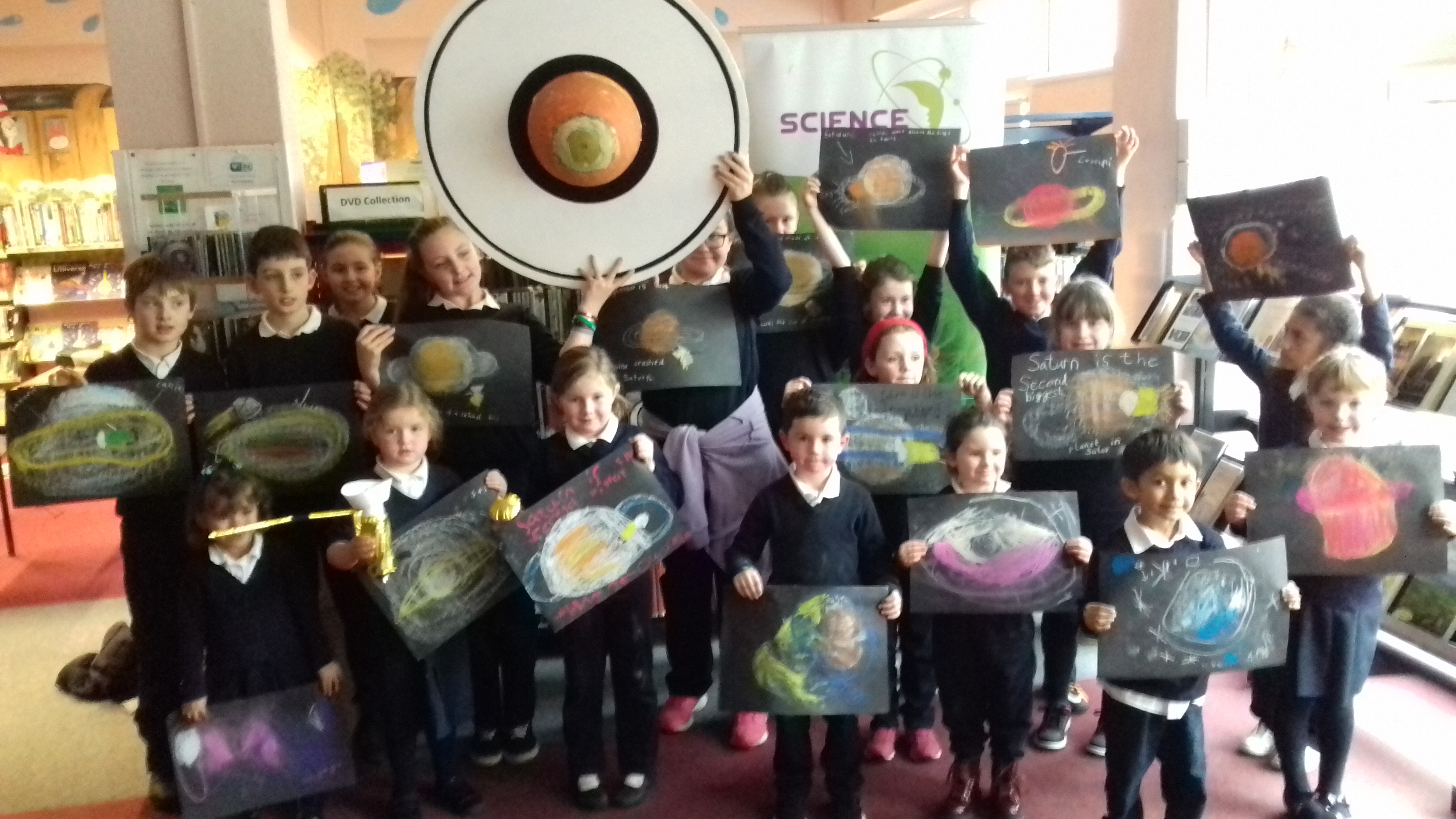 Holding my models of Saturn, Huygens and Cassini are children from Drumboylan NS Co Leitrim after their Spectacular Cassini Workshop. Lovely drawings were produced by these little artists at Carrig On Shannon Library during Science Week.

The Cassini model was made out of a soft drinks can covered in heating insulating material. The insulating material just happened to be the same colour as the  space proof  blanked covering the real spacecraft. The magnetometer boom was made from wooden coffee stir sticks as they made that triangular shape  easily. The main engines were made from metal icing  piping cones.  The communications dish was made from party dishes for sweets.  Saturn I made from a large polystyrene ball painted using the most recent images. The rings were cut from an 8 foot X 4 foot piece of corry – board ( politicians use it to hang their faces on poles during elections ).

As there were so many drawings produced by children from schools all over the country I cannot write about them all. However I do want to point out some that really were exceptional. 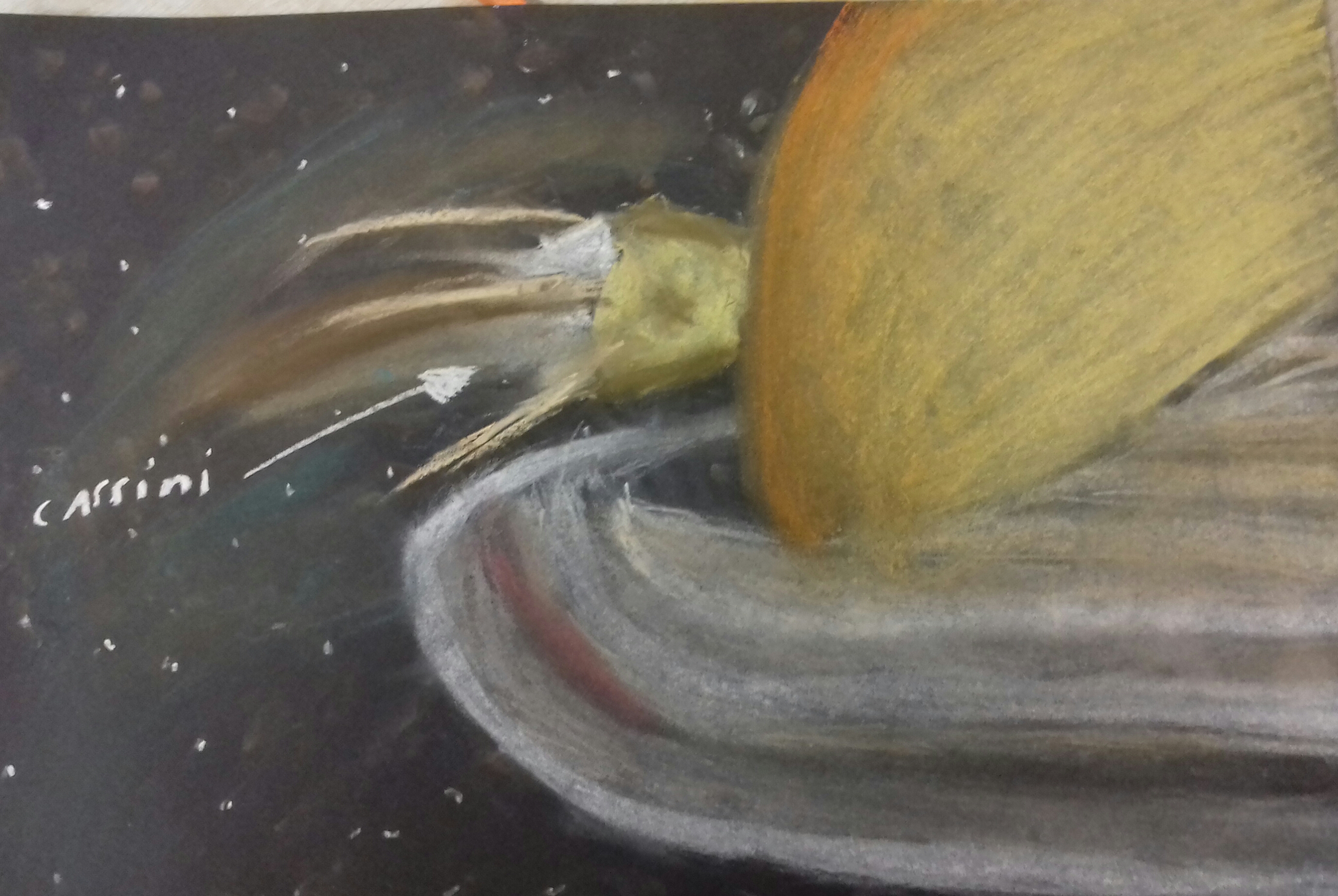 This beautiful drawing (above) was created in Space Week  by an 11-year-old  boy from St Mary Boys NS in Maynooth Co Kildare. He worked away quietly among his peers without a word said or a request for help. It is without doubt one of the best drawings produced by any child in any of my workshops.

In the drawing he has captured the moment Cassini impacted Saturn. He has added a wave-like flow to the rings of the planet which gives the drawing a sense of movement and power. He has added texture to the planet body and notated the drawing so we are in no doubt that this is indeed the Cassini spacecraft. Even the engine action is animated, adding to the strength of the drawing.  It was wonderful to see such a drawing produced in about 30 minutes.

It was also admirable that his teacher had recognised his talent and encouraged it. Very often these days drawing is not rated as a primary educational tool. When I was a kid we drew in Biology , Physics, Chemistry , History, Geography and Art . In truth it really does not matter if a child is good or bad at drawing. It is the activity of drawing coupled with understanding that fine tunes the learning.  The workshop was for Kildare Library Services.

Another wonderful drawing experience happened during Science Week 2017 . I was working in St Nathy’s College in Ballaghaderreen Co Roscommon. This was on behalf Roscommon library services. Three Spectacular Cassini workshops for first year second level students. Their  Maths/ Physics teacher suggested that maybe some of the older teens who like drawing could sit in on all three workshops.  What a great idea, so  girls aged 14 – 16 arrived to draw along with the 12 year olds. They drew and they drew, hours went by and they were still drawing away.

What they produced was extraordinary here below are a few examples.  I could see their light touches and inventive ways to use pastel.  It was a pleasure to talk to them about my experiments with the medium and share some of my methods. Requests  were sent to key teachers inviting  them to join us throughout the day to see the work. An exhibition  has ensued since then for all the school to view and take the time to appreciate the exquisite images  Cassini produced, captured  in a series of exceptional drawings.

It is my belief that drawing is a primary educational tool. Drawing something that you are learning about reinforces that learning in several ways. Exhibiting the drawings  afterwards extends the learning and curiosity about the subject even further.  Many young children asked me ‘ can I bring my drawing home ‘ ? Of course they could, or in fact many schools held exhibitions adding to the children’s self esteem on their achievements. Sometimes the images that were taken  by Cassini appear very complex. Drawing them can be a challenge, but children from age 6 and upwards were never phased by the complexity, they just got on with it. The quality of space images produced by the Cassini spacecraft are exceptional. It is my pleasure to share them with explanations suitable for children.  The aim being to  enhance their understanding of our solar system through drawing. Spectacular Cassini the workshop was futher blessed by being supported with NASA Cassini Educational materials to give away to teachers and the students themselves. More on this to follow.