Most amateur astronomers have the desire to build their own telescope.  The thought of having a telescope you literally known inside and out feeds the romanticism of the hobby.  This romanticism inspired me to try and build an 8″ Dobsonian telescope when I was in college.  My attempt at this was… well… a good “learning experience.” What happened, you may ask?  Lets just say, I currently do not own an 8″ Dobsonian telescope.  Reflecting on this painful (and expensive) failure reminds me of a typical trap that people new to astronomy often fall into: the presumption that “bigger is better.” As I have grown in my love of astronomy over the years, I find just as much joy looking through a good pair of binoculars as I do looking through a fairly large telescope. 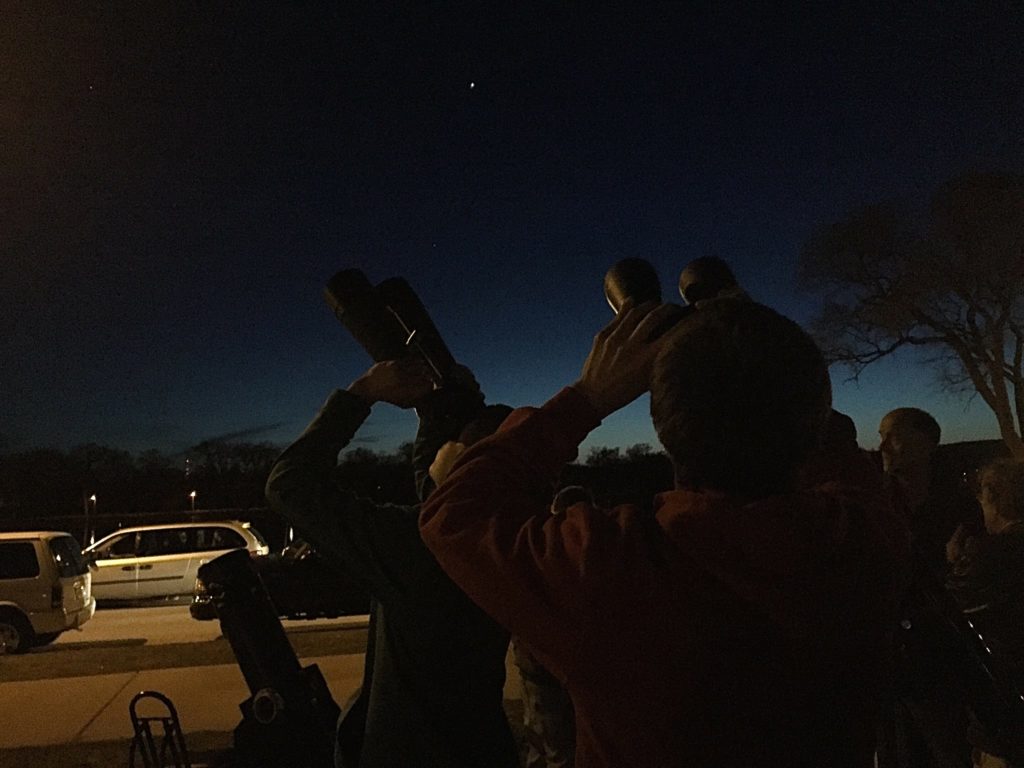 Image from the La Crosse Area Astronomical Society’s public viewing night on National Astronomy Day.  Two friends walking along the Mississippi River in Riverside Park decided to take a break and look at Venus, the Moon and Jupiter.

That being said, large telescopes still fascinate me and I love to look through them when I can.  Maybe its just the “kid in me,” but I get excited every time I go to a star party and see a +20″ primary mirror Dobsonian being calibrated.  These moments of excitement remind me that everyone has a natural inclination to peer into the deepest parts of night sky, wanting to come away feeling like they experienced another world.

In the professional realm, it appears that some exciting days are ahead of us when it comes to telescopes.  From my limited exposure to the future of astronomy, it seems the battle cry is becoming “bigger is better.”  We have been blessed to live in the time of the Hubble Space Telescope (celebrating its 25th birthday), but now we look ahead to projects like the James Webb Space Telescope and the Giant Magellan Telescope, promising even grander images to feed our soul’s yearning to know the world we live in.

Here is a short video on one of the most amazing telescopes coming out in the years to come, The Giant Magellan Telescope. 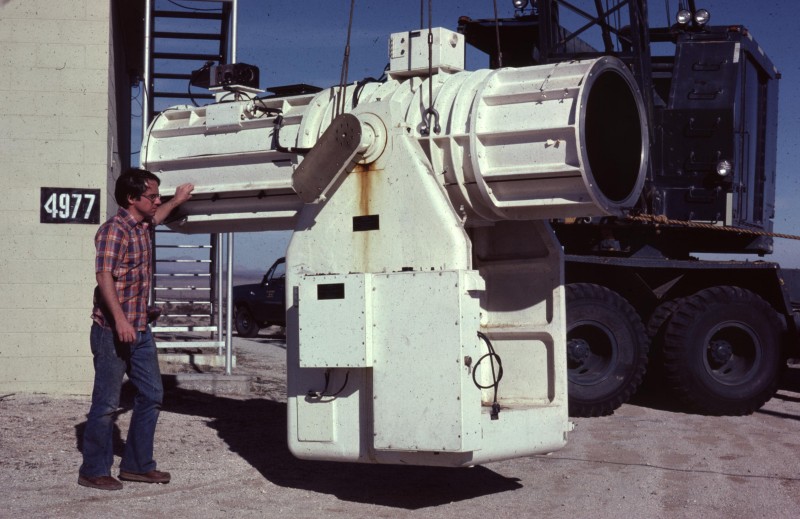 The retired Air Force 24″ Newtonian being installed at Hobbs Observatory in the early 1980’s. Originally used to track missiles and high altitude aircraft.

A telescope of particular interest to me is the 24″ Newtonian Reflector at the Hobbs Observatory in Fall Creek, Wisconsin.  Its not the biggest telescope out there, but, to put it into Biblical terms, it is a great example of turning “swords” into “plowshares.”  The telescope was originally used by the Air Force to track ballistic missiles and high altitude aircraft during the hight of the cold war.  Housed at Edwards Air Force Base, the telescope was eventually decommission and placed on the Federal Surplus Property program.  When Hobbs Observatory inquired into the availability of this 8,000 pound, 12 feet tall telescope, worth more than $250,000, the Air Force told them if they could find a way to transport the monster, it was theirs for free!  $11,000 in transportation fees later, the 24″ Newtonian found its new home in west-central Wisconsin.

One of the big problems with the telescope was its secondary mirror.  Since the telescope was designed to observe weapons of war and not planetary nebula, there needed to be some modifications made to “recommission” the telescope for science and the wonderment of the general public.  I recall sitting at a meeting of the Chippewa Valley Astronomical Society were they tried to figure out how to recalibrate the secondary mirror without doing permanent damage to the telescope.  Though many of the details of the conversation went way over my head, I felt a deep solidarity between everyone in the room regardless if they were a novice or a professional.  It was clear that all of us wanted this thing to provide the best images possible to help us understand the world we live in. 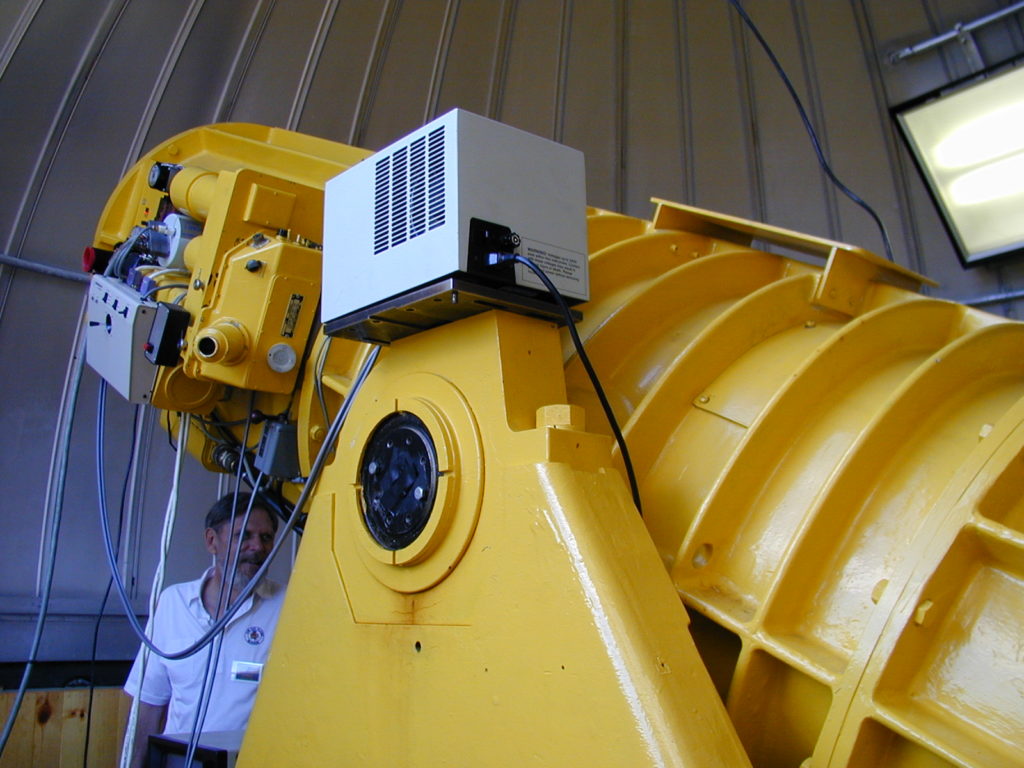 The 24″ Newtonian today with its new digital camera.  One of the big summer attractions for science enthusiast in west-central Wisconsin.

Whether it be looking through the next generation of space telescopes, the “war scope” turned “dove scope” at a local observatory, or the old pair of binoculars we pull out of the the cupboard from time to time, we all turn to these tools for similar reasons: we want to understand the world we live in and wonder about our place in the universe.  I remember asking Br. Guy at the Faith and Astronomy Workshop if we are living in a golden age of astronomy?  His answer was classic Br. Guy: We are always living in a golden age of astronomy.  His words are so true.  Regardless of the times we live in, regardless of how advanced or primitive the tools are that we have, we are always living in a golden age of astronomy as long as the human person continues to gaze into the night sky and ask the big questions of life.  As we move into an exciting era of astronomy, we will have better tools to ask those questions and, in the process, have a better understanding of who we are in God’s eyes.

Discussion question: One thing I know about “astronomy people” is that we all have our favorite stories to share about what we have seen in the night sky – the first time we saw the moons of Jupiter, the first time we “found” a planetary nebula, the first time a shooting star blazed through the eyepiece as we were looking at another objet, etc.  We also like to share stories of telescopes we have seen in person that blew our mind, similar to the car guy at an old car show who finds the ’57 Chevy he drove in high school.  I would invite you to share some of your memorable experiences of star gazing – whether they be simple or from the labs of professional observatories.  What was it that made you want to pursue astronomy as a hobby or as a profession and what keeps you coming back?  Together, may we find solidarity in our shared love of observing the heavens!

Of course, the amazing telescope this site is designed to support is the “telescope made by an Angel in a Jewish Synagogue” – The VATT.  For those who give to this blog, thank you for your support of the work of the Vatican Observatory.