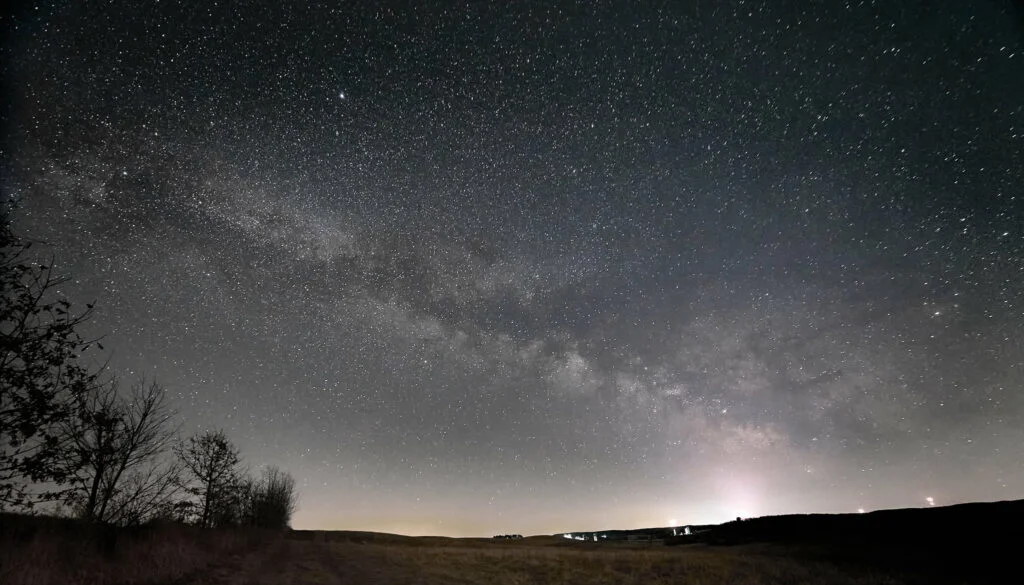 The reason for my recent absence from the blog was the occupational hazard of being a parish priest: Holy Week and Easter! Easter is, for Christians of all denominations, the liturgical apex of our communal spiritual lives. And as this apex coincides with the awakening of nature from dormancy we call spring (at least in the Northern Hemisphere), the comingling of the Book of Scripture proclaiming the resurrection of Christ and the Book of Nature exploding with new life creates an easy connection with faith and the natural world.

Now that we are officially in the Easter season, we develop a longing for summer when the Church is decorated in green to signal Ordinary Time, connecting our faith with the natural green growth of fields and forests. The night sky reveals our celestial home in all its grandeur as the Milky Way dominates the heavens. Combine this with the warmth of summer, and those of us who live in the Great Lakes region of the United States are presented with a stunning backdrop for mystic nights and deep prayer.

From there, we move into autumn and the beginnings of winter. The colors turn from green to the rusty reds and yellows of dormancy. The wildlife that make their temporary home in the Midwest prepare to leave for warmer climates and birds more accustom to arctic habitat begin to emerge. The colors of the Church change to purple to signal a time of making ready to meet Christ when he returns in final glory. The night sky overcomes the day sky, reminding us in the north of the tension between the light of truth and the absence of spiritual vision that comes when light is absent.

The winter months are met with both rugged endurance and expectation as the cold of winter that can be bitter and hard is comingled with the slow lengthening of days as the vernal equinox approaches. The colors of the spiritual life of the Church oscillate between whites, greens, purples, and pinks, signaling both a stark detachment from the world, but also anticipation of both the resurrection of Christ and a return of the green shoots of spring. The whites, purples, and pinks can be found as Orion the Hunter dominates that night sky as if it were a guardian of this season of bitterness and hope. And then, summer returns, allowing this cycle to occur over, and over, and over, and over again.

And that is the irony. Even though I can speak fondly of the cycle of our spiritual lives and the natural world, it also reminds me of the main complaint I get about Catholicism and, in particular, the Mass: Fr. James, its just the same thing over and over and over again… boring!

Now, in defense of the liturgical peanut gallery, we need to make a distinction between the repetitive nature of liturgy and monotonous liturgy. Recalling the definition of liturgy as people performing a divinely inspired work implies that if the liturgy is approached in a lazy manner it can loose its impact. However, if liturgy is celebrated with an attentive heart, the repetitive nature of our prayer can create a deepening of our faith, coming to deeper understandings of the God we love.

This repetitive nature of the liturgy is at the heart of Ignatian Spirituality when Ignatius spoke of prayerful Repetition. When we pray with the Book of Scripture and a passage speaks deeply to us, St. Ignatius encouraged his young Jesuit Order to take that passage to prayer time and time again. Similar to the distinction between repetitive liturgy and monotonous liturgy, the revisiting of Scripture is not to be done in a superficial way that could induce boredom in the person who prays, but is meant to open one’s heart to the deeper meaning of Scripture.

I experienced an example of this a few weeks ago. As a priest of 17 years, I have cycled through Scripture about 5 times. I pour over the same passages every year, but gain new insights every time. This year, I was struck with the end of the Gospel reading from John for the Third Sunday of Lent.

While he (Jesus) was in Jerusalem for the feast of Passover,
many began to believe in his name
when they saw the signs he was doing.
But Jesus would not trust himself to them because he knew them all,
and did not need anyone to testify about human nature.
He himself understood it well. (John 2:23-25)

For whatever reason, the sentiment of Jesus not trusting himself to the people because he knew human nature well spoke deeply to me. Was it because as I get older and wiser that I’m developing a deeper awareness of human nature? Is it because I am developing an awareness of my own frailties as I grow a year older each year? The point is that I have read this passage a number of times. However, this year, it was revealed to me as something I needed to take to prayer as if I read it for the first time.

One of the things I so love about science is its built in rhythm of exploring data over, and over, and over again. Similar to prayer, the pouring over of data should not be done in a superficial manner, but with a discerning, attentive heart to come to new insights into the subject being studied. Can scientific method be seen as an act of prayer? I would hesitate to go that far for many reasons (Perhaps one of our professional scientists could weigh in on this). However, can a pouring over of the Book of Nature lead us to a deeper understanding of how God’s creation works and, by extension, how God acts in and through creation? I would argue, yes it does.

Its quite beautiful when you think about it: The Book of Nature and the Book of Scripture held together will lift us to truth like the wings of a bird through their repetitive, rhythmic cycles. And in the background, the founder of the Jesuits, St. Ignatius, encouraging us to pour over both “books” time and time again to be drawn closer and closer to God. Perhaps the liturgy isn’t that boring after all!

Spiritual Exercise: Find a passage from the Book of Scripture and something in the Book of Nature that you feel inspired to do an “Ignatian Repetition” with today. Perhaps God will help you experience something you have read or seen time and time again as if it were for the first time.

Cover Image: Early Morning Milky Way Capture about 20 minutes from where I live.