Right near the point where Kentucky, Tennessee, and Virginia all come together stands a Catholic church in an asteroid impact crater. The church is St. Julian in Middlesboro, Kentucky. In fact, the entire town of Middlesboro sits in the crater. 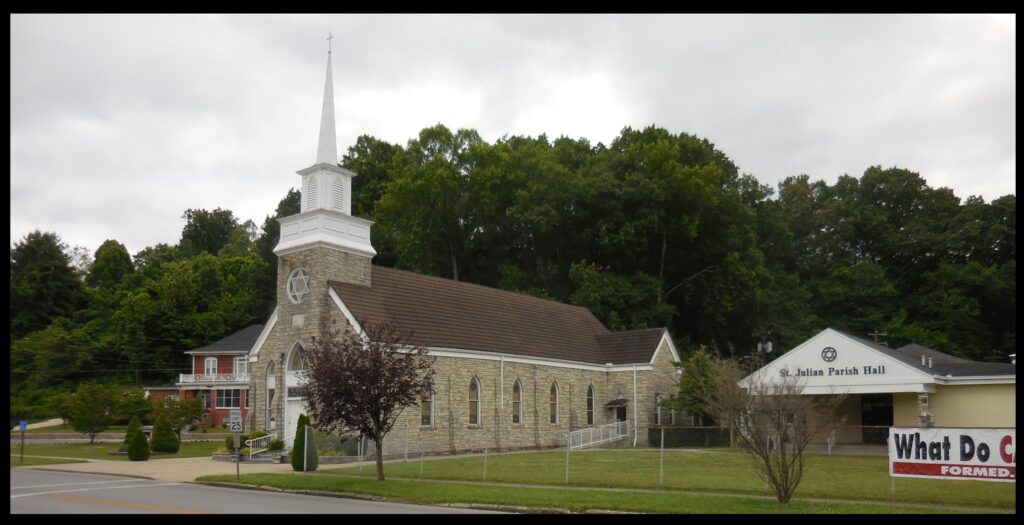 St. Julian Catholic Church in Middlesboro, Kentucky. Thank you to Fr. Kiran Varaparla and Ms. Elizabeth Evans who showed me around the church.

For most of St. Julian’s history, no one realized that it stood within a crater. The church was built in 1892, as Middlesboro itself was being built. Middlesboro sits right below the Cumberland Gap, on the United States’ old “Wilderness Road”. As the 18th century turned into the 19th, hundreds of thousands of settlers from the original 13 states of the U.S. followed that road, migrating to what is now Kentucky. Middlesboro itself came into existence much later, however, when an English coal baron invested heavily in the area. The Middlesboro basin was a good place to put a town that was to be built around a mining economy.

According to the Kentucky Geological Survey, it was not until geologists did detailed mapping of the area in the early 1960s that they interpreted the features of the Middlesboro basin as being the result of an ancient impact. Then,

In 1966, detailed rock and mineral analysis revealed shattercones and shocked quartz in rocks near the central uplift area [of the basin], providing more evidence of an impact origin. Shattercones are cone-shaped features that contain thin linear ridges formed by shockwaves from a meteorite impact. Shocked quartz is extremely deformed quartz grains in rocks, caused by intense pressures that can only be created by meteorite impacts or nuclear bombs. A meteorite approximately the size of a football field is thought to have struck… sometime less than 300 million years ago…. Weathering and erosion have reshaped the landscape…. 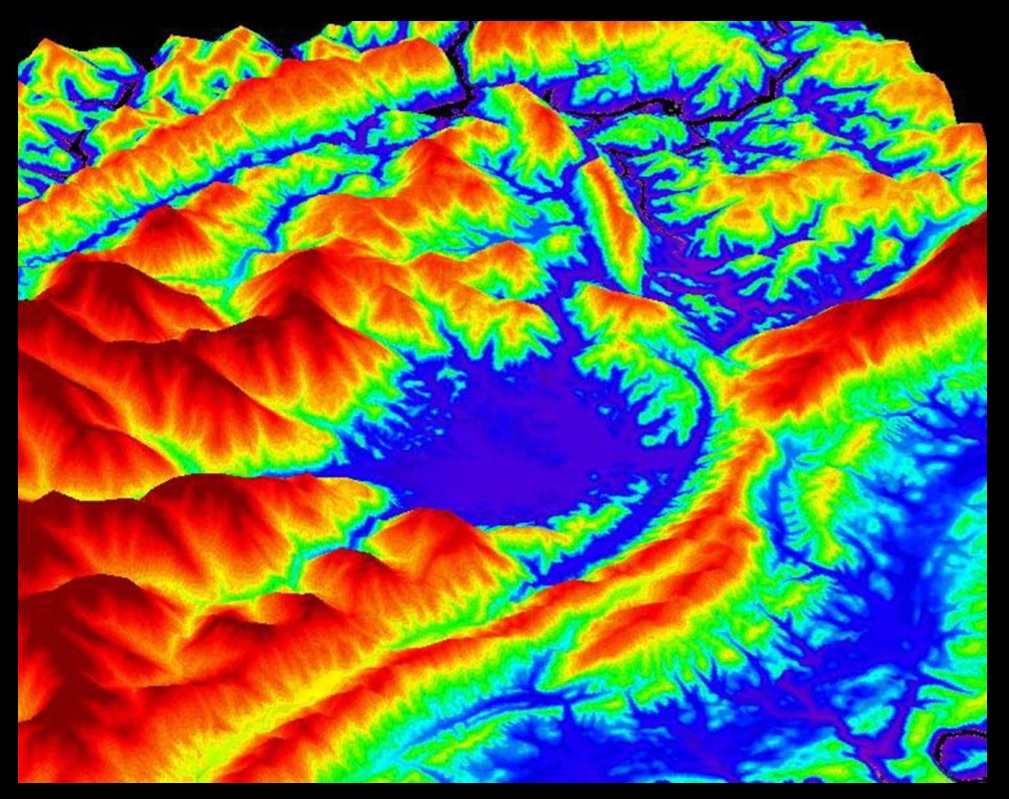 The crater really stands out in this enhanced terrain map of the Middlesboro and Cumberland Gap area (from the Field Guide to the Middlesboro and Flynn Creek Impact Structures, edited by Milam, Evenick, and Deane, in association with the 69th Annual Meteoritical Society Meeting, 2005).

Over the next few decades more studies of the area pointed to its extra-terrestrial origins. In contrast to Kentucky’s Jeptha Knob, discussed a while back on this blog, geologists seem quite confident about this being an impact crater. In 2003, the Kentucky Society of Professional Geologists designated Middlesboro as a Distinguished Geologic Site. Since then Middlesboro has embraced its identity as being the Crater City—the only city in the United States to be located within an impact crater.

St. Julian is the only Catholic church in Middlesboro. Therefore, St. Julian has the distinction of being the only Catholic church in the U.S. to be located within a city in an impact crater! Check out all the photos and maps here. And then, if you get a chance, go visit St. Julian. While you are there, you can always check out the mountains and Cumberland Gap National Park, too.

Above and below are photos of the Middlesboro crater, taken from different elevations. 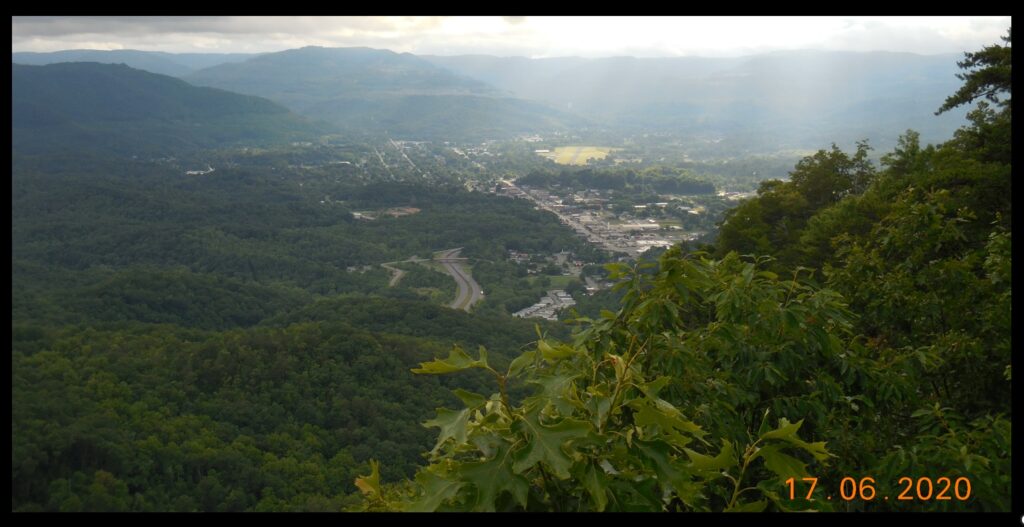 A composite panoramic shot of the crater, spanning over 180 degrees from left to right. The crater edge is seen in all directions from within Middlesboro. 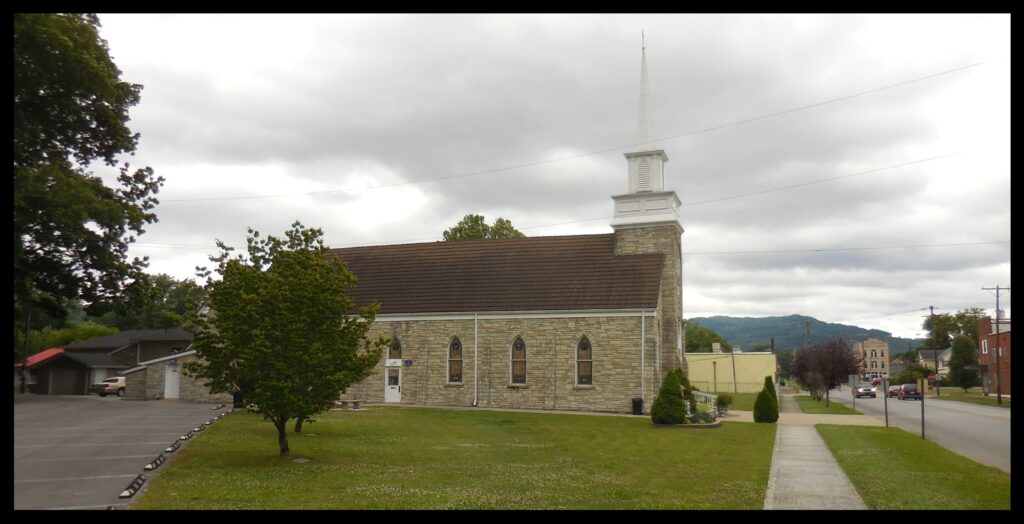 St. Julian, with the edge of the crater visible in the distance. 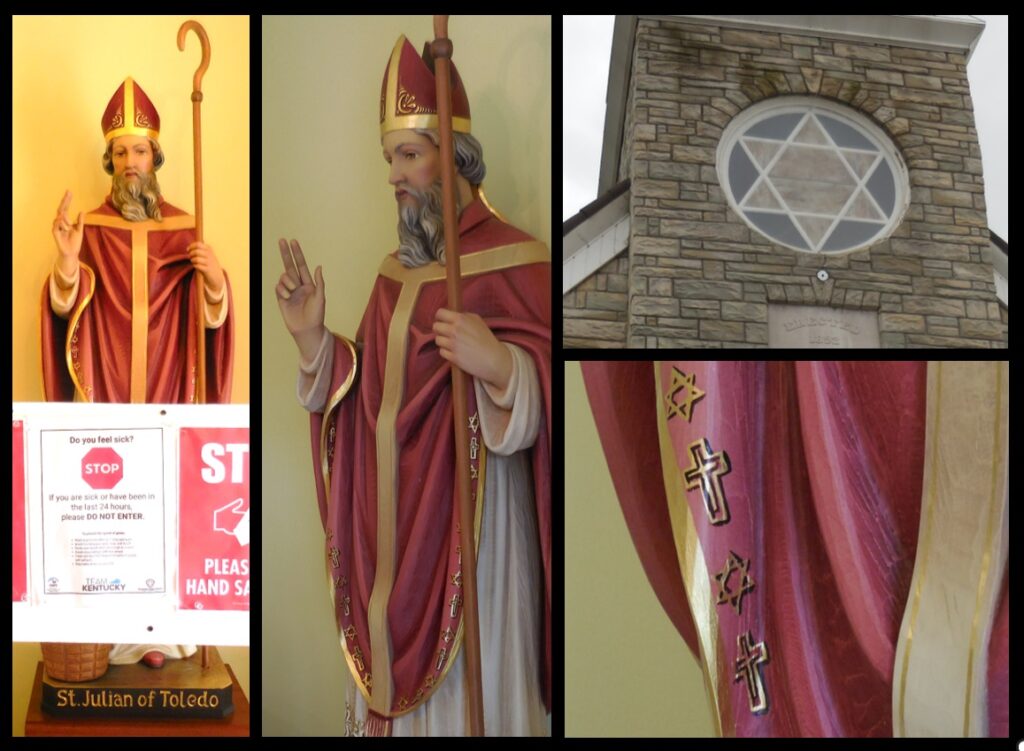 The church bears the name of St. Julian of Toledo, who lived in the 7th century. The prominent Star of David on the church presumably is in reference to Julian having been of Jewish extraction; his parents were Jewish converts to Christianity. A statue of St. Julian that greets visitors (from behind COVID-19 warnings at the time I was there with my wife) is adorned with both crosses and stars.

As the photos above clearly illustrate, Middlesboro truly is the “Crater City”.