Slooh.com has asked me to offer a reflection on the Rosette Nebula and St. Valentine for their live Valentine’s Day special (to watch, check out www.slooh.com).  Being that I have become accustomed to exploring faith and science through astronomy, my first question to answer was simply this: Is there a relationship between St. Valentine and the Rosette Nebula?  As I did a little digging online, the only connection I could find was rather “heartfelt” (pun intended).  What I discovered is that many observatories and online astronomy groups like to post images on their websites of night sky objects that look like hearts and roses on Valentine’s Day (some of them needing a little more imagination than others).  Despite this sentimental connection, I did find a couple connections we can make between St. Valentine and the Rosette Nebula, even though they are a little bit of a stretch.  With that in mind, let’s explore the Rosette Nebula and St. Valentine. 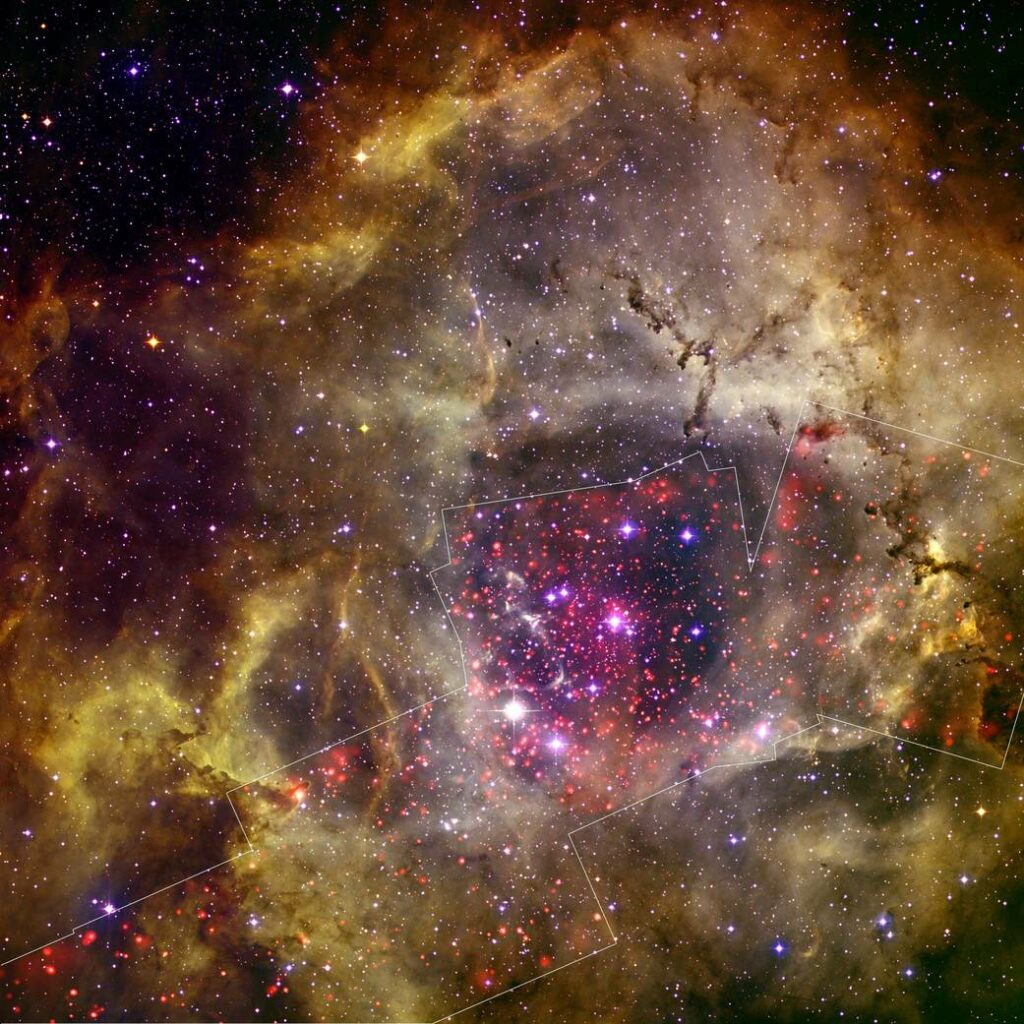 NASA image of the Rosette Nebula

The Rosette Nebula is an emission nebula, meaning that the gases of the nebula are hot enough to illuminate itself in shades of red-ish pink.  The object is about 5,000 light years away from us, making it relatively close in comparison with the rest of the universe.  Nebulae are the remnants of supernovae, or stars that have exploded.  These explosions allow for the fusion of heavier elements needed for biological life to exist in our universe.  Our Earth, for example, was most likely “seeded” with heavier elements form the remnants of supernovae.  Therefore, the ability for life to exist is due in part to the “death” of stars in our galactic neighborhood.  As is often the case with an emission nebula, the Rosette Nebula is a place of star birth.  Images of the Rosette Nebula taken from the Chandra X-ray Observatory have revealed over 100 new stars in a region called NGC 2237 in addition to stars that have been observed in the nebula through ground based observation in the past.  Therefore, the Rosette Nebula contains one of the core mysteries of the universe: The cycle of life, death, and new life.

It is here that I find a loose connection between this Nebula and St. Valentine.  St. Valentine, of whom we know very little about, was a martyr of the Church from the third century.  Popular tradition tells us that Valentine of Rome was martyred for celebrating secret, unauthorized weddings due to Emperor Claudius II’s decree forbidding soldiers to marry.  The proposed rationale for this edict was that Claudius II felt that unwed soldiers fought better than married soldiers.  Therefore, when it was discovered that St. Valentine was secretly performing weddings between soldiers and their fiancés, Valentine was put to death by Claudius II.  This and other stories of the martyrs point to an old saying in the Church, “The seeds of faith are watered by the blood of the martyrs.”  It is an odd mystery that through the death of the saints of God, new faith is “seeded” in those who knew them and is passed on from generation to generation.  Are martyrs the metaphorical “nebulae” of the Church that bring about new life?  Perhaps this connection is a bit of a stretch.  However, when we explore the life of this saint on a deeper level, we can find a connection between the Rosette Nebula and St. Valentine that is a bit more concrete by exploring the literary genre we call hagiography and the process of digital manipulation that scientists and hobbyists do to emphasize certain attributes of celestial objects.  Let’s explore this relationship.

In regard to saints, there is a particular genre of writing we call hagiography.  The simple definition of hagiography is that they are stories about the lives of the saints.  However, some of these stories seek to exaggerate certain details of a saint’s life to make a clear point.  Therefore, we see that St. Valentine, the patron saint of engaged and married couples, is known in his hagiography for the celebration of clandestine weddings and his death because of this practice.  However, commonsense tells us that there was much more to the life of this unknown saint that is not available to us.  In fact, the less we know about a saint, the more skepticism Church historians will have when evaluating the historicity of the hagiography.  This known attribute of exaggerating aspects of the lives of the saints is what makes hagiographies challenging to properly understand.  For example, when we look at the hagiographical texts known as the martyrologies, we actually find that there are three Saint Valentines associated with the date of February 14th.  Further, the Catholic Encyclopedia also points out that February 14th was the date associated with the “coupling of birds” in England and France during the middle ages, eloquently referenced in the writings of Chaucer.

For this was sent on Seynt Valentyne’s day
Whan every foul cometh ther to choose his mate. (Chaucer, Parliament of the Foules)

This practice of “coupling” seemed to not only occur among birds, but European literature from the 14th and 15th century also pointed to February 14th being a time when couples would begin relationships and call each other “Valentines.”  Combine these stories with the ancient pagan feast of Lupercalia, a feast that was celebrated on February 15th and thought to release health and fertility, and the skeptic has rather solid ground to pose a logical question: How much of Valentine’s Day is about St. Valentine and how much is about the legends and cultural practices that are associated with this time of the year?  These kind of questions surrounding the feast day of this saint led the Church to drop St. Valentine from the official calendar of feast days back in 1969.

This, however, brings us to an important point of transition from St. Valentine to the Rosette Nebula.  Since the Church has dropped St. Valentine from the cycle of feast days we celebrate, does this mean that St. Valentine did not exist and that the story of St. Valentine is not true?  Not necessarily.  The Church still affirms the existence of this Saint.  However, the Church also wishes to protect the faithful from confusion by affirming that the image we have of Valentine might have become so distorted that we need to question the dependability of the hagiography.  How does this transition us to the Rosette Nebula?  The transition is this: Just as hagiographies can, at times, so exaggerate the attributes of certain saints that we need to question their accuracy, does the process of digital “enhancement” of night sky objects run the risk of so altering a star, nebula, galaxy, or cluster that the “true image” of the object is lost?  Let’s explore the meat of this question.

As I visited many astronomy web sites, I found wonderfully bright red images of the Rosette Nebula, allowing the mind to make a logical connection between the nebula and a rose that many will receive on Valentine’s Day.  For example, I have provided for you an image I took with the Slooh Observatory, slightly altered, of the Rosette Nebula.  Therefore, I extend to all of you an early “Happy Valentine’s Day.” 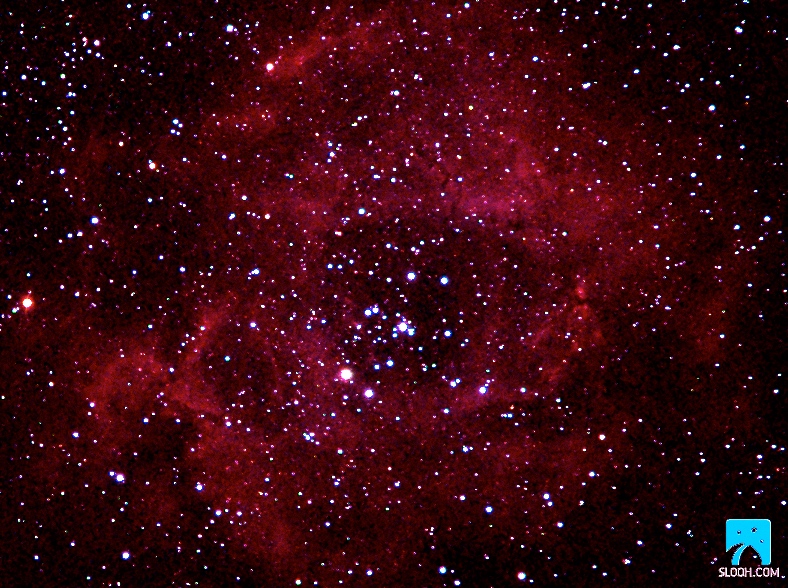 As often is the case with astronomy, one needs a healthy imagination to see a rose in the above image.  However, I think it is safe to say that this is one image that doesn’t need as much creative thinking as other images do.  You can see the gas cloud that hints at the rose peddles.  You can see a well defined center, similar to the center of a rose.  This image, in many ways, would make a nice Valentine’s Day card for the astronomy enthusiast in your life.  There is just one problem with this image: This isn’t what the Rosette Nebula looked like when I took the initial picture.  In fact, I fibbed a little when I said that this image was “slightly altered.”  In fact, it took quite a bit of playing around with I-photo to get this image.  The original, true light image of the Rosette Nebula I took was the image below. 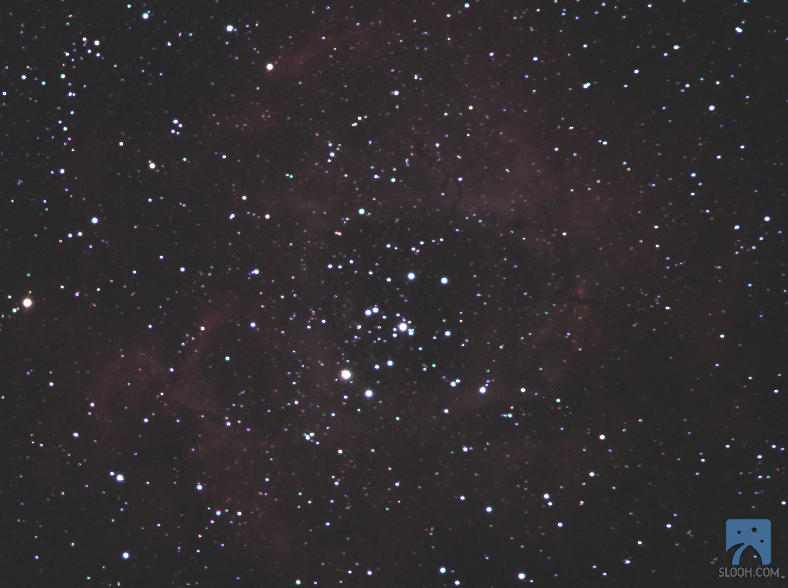 Do you see a rose in this image?  Welcome to what I would like to call the “hagiography” of night sky images.  It is no secret that many people get interested in astronomy because of the rich, beautiful pictures we find online from the Hubble Space Telescope, the Chandra X-ray Observatory I mentioned earlier, and other images from space and ground-based observatories that look more like non-representational art than night sky objects.  People I know have rushed out to buy “big box store” telescopes, hoping to glimpse these amazing images, only to come back disappointed as they look at “dust spots” to their mind that are actually galaxies and star clusters.  Even the rich pinks and reds that time exposed images give us are not visible with the naked eye or small telescopes. Therefore, one can legitimately ask: How much of our view of astronomy is based on “real color” images of space in contrast to images that are so altered that the essence of the original image has been lost? 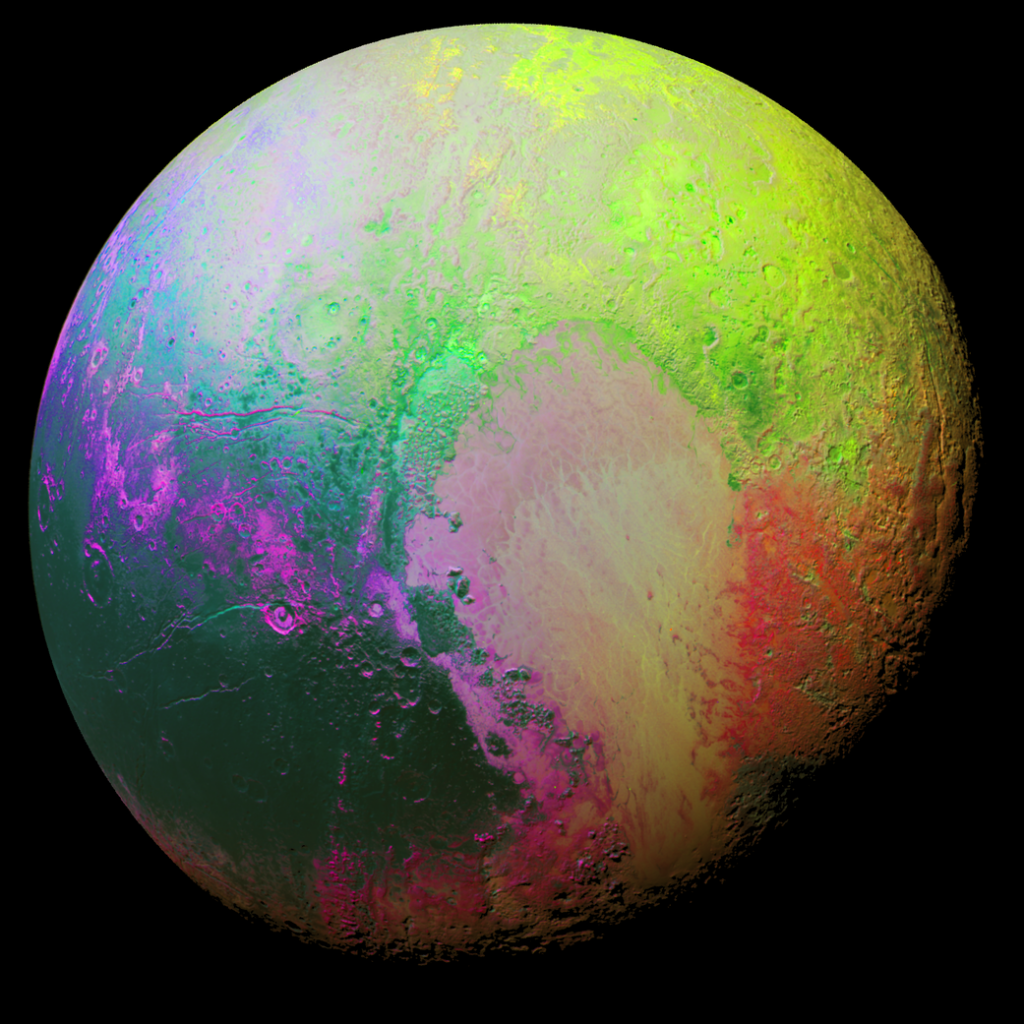 A false color image of the “heart” of Pluto from NASA’s New Horizons.

In light of this, should we do away with all digitally altered images of the night sky?  No, we should not do away with these images.  Many of the alterations are done by scientists to look for specific data to better understand a night sky object.  For example, when the false color image of Pluto on the right came out, we all knew that it wasn’t a true depiction of what Pluto looked like.  However, to scientists, this image gave crucial data to help understand the distinct regions on Pluto’s surface.  Therefore, sometimes a “false image” can lead to a deeper understanding of the object that is being studied.  In a similar way, hagiographies of the saints should not be seen as simply “myths of the saints.”  Rather, they should be carefully studied to understand why certain aspects of their lives were so emphasized by the Church.  It may be that, similar to a false color image of the Rosette Nebula or Pluto, the stories of the saints, though exaggerated at times, give us a true image of a life of holiness that, if read properly, can help us to embrace a life of faith.

St. Valentine and the Rosette Nebula, a saint and a night sky object that go well together on Valentine’s Day.  I pray this reflection has shed some light on how hagiography and digital alteration can actually help us understand more deeply certain aspects of the lives of the saints and world we live in.  The story of St. Valentine points us to the sacramental bond of marriage and how this bond transcends the social structures of a given culture.  The Rosette Nebula points us to the mystery of death and new life we find in the universe, begging us to reflect on how we view this mystery in our own lives.  This Valentine’s Day, may we explore these great mysteries so we can grow in deeper love, not only with a “significant other,” but with God who has given us the ability to wonder and awe at the beauty of creation and at the love that draws and binds us together as a people.