This is the third in a series of posts (click here for the series) arguing that the Star Wars universe is truly a Thing of the Past; that the ideas upon which the Star Wars universe is built are fading rapidly and are truly, as the phrase goes, ‘on the wrong side of history’, and on the wrong side of science.  Today we seem to be in the midst of a great revolution in our view of the universe—and Star Wars is pre-revolution. 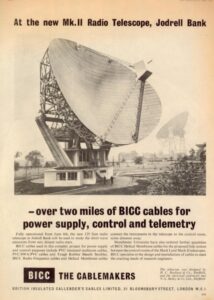 A 1965 advertisement in New Scientist featuring a new radio telescope.

In the last post, Episode II, we saw the Judgment of History coming down hard on the idea that other planets are like Earth, at least insofar as the solar system planets are concerned.  Lots of people said our solar system would be full of intelligent life outside of Earth—there was even mention of extraterrestrial rope!  Some even said the sun would be inhabited.  We saw newspapers a century ago trumpeting the latest news about construction projects on Mars, by Martians.  And of course all this was wrong.  People like William Whewell and Alfred R. Wallace argued that other planets in the solar system would be too inhospitable for intelligent life, and darned if they were not so right that in fact there might not be any life at all in the solar system, outside of Earth.

That still leaves the rest of the universe.  Starting in the early 1960’s astronomers like Frank Drake and Carl Sagan began using a new technology—radio telescopes—to search for radio waves generated by civilizations on planets circling other stars.  Drake, Sagan, and others suggested there might be a million technologically advanced extraterrestrial civilizations in our galaxy alone.  Now that’s the Star Wars universe.

The search for transmissions from extraterrestrial civilizations, known as the “Search for Extra-Terrestrial Intelligence” or SETI, is quite logical.  We on Earth generate all sorts of radio signals and have been for almost a century now.  Any advanced civilization within about 100 light-years of Earth with a good enough radio telescope could potentially hear those signals and know we exist.  The idea of SETI is that we on Earth can do the same, and listen for signals from alien civilizations.  However, the SETI effort has been going on for decades in various iterations (I personally made a very small contribution to SETI back in the 1990’s—see below).  No signals have been detected. 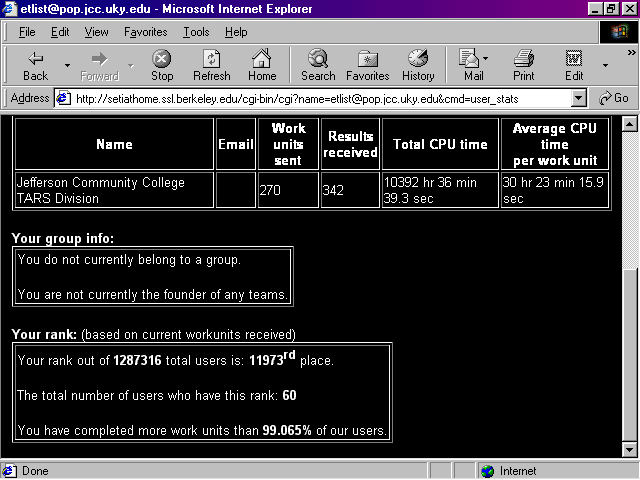 One SETI project that has been going on for years is called SETI@home, in which participants volunteer their computers for the processing of signals received by a radio telescope, in hopes of finding an artificially generated signal.  I once was an enthusiastic participant—I loaded the program onto the computers in the computer labs of my college, Jefferson Community & Technical College (then just Jefferson Community College), and got my college up into the top 1% of all participants in the program.  This screen shot of Jefferson’s ranking in the program (I was very pleased to have my little college ranked so high among all participants, so I saved a record of it!) dates from the late 1990’s.

Blowing up entire planets in The Force Awakens.

We humans get our resources from our planet.  Imagine a civilization that can harvest resources directly from its sun, and that can destroy planets—think of something like the First Order in Star Wars: The Force Awakens!  But then, imagine a civilization that can extract resources at a galactic level, one that could crush the First Order like a modern military could crush even the best army from the mid-nineteenth century.  It might take hundreds of thousands of years for an intelligent race to advance to such a point, but since the universe appears to be 14 billion years old, time is no problem.  A Russian astronomer named Nikolai Kardashev speculated about these sorts of things back in the 1960’s.  Since then, astronomers have talked about Kardashev Type I (planet-level), Type II (sun-level), and Type III (galaxy-level) civilizations.

Type II and III civilizations would be powerful.  If they exist they should not be hard to see.  Yet they are not seen—and astronomers have looked.  For example, Jason Wright, an astronomer at the University of Pennsylvania, made news a couple of years ago with a search of 100,000 galaxies for signs of alien “supercivilizations”.  No luck.

The lack of obvious evidence for extraterrestrials is actually a very strong argument against the existence of them at all.  If advanced extraterrestrial life is common, then the universe is big enough, and old enough, that some supercivilization should have cropped up somewhere—maybe next door, actually—and it should stand out like a sore thumb.  That none do says that technologically advanced intelligent extraterrestrial life (the thing that is the staple of Star Wars) is actually not common.  This is called the “Fermi Paradox”, named for the physicist Enrico Fermi, who supposedly raised this point back in the middle of the twentieth century in response to colleagues who were gushing enthusiastically about extraterrestrials.  In the 1970’s, just as the first Star Wars movie was being made and released, an astronomer named Michael Hart brought up this line of reasoning in response to SETI enthusiasm.  In a 1975 paper entitled “An Explanation for the Absence of Extraterrestrials on Earth” he argued in essence that there was no good way around the Fermi Paradox, and therefore technologically advanced extraterrestrial civilizations were actually not at all common, and “an extensive search for radio messages from other civilizations is probably a waste of time and money.”

One possible explanation of the Fermi Paradox is that the lesson that we learned from our solar system also applies to the rest of the universe—that lesson being that there is more diversity out there than we have traditionally imagined.  As mentioned above, in Episode II of this series of posts we saw how astronomers once assumed that the planets of our solar system were a pretty uniform lot, all being more or less like Earth and all able to sustain intelligent life—only to later discover how diverse the solar system planets are, so that Earth may be the only one to host life at all.  Now today we have discovered planets beyond our solar system—that is, exoplanets.  The exoplanets have informed us of the diversity of the universe.

Mars and Jupiter (which astronomers once envisioned as being inhabited—see Episode II) did not turn out to be just like Earth, and other star systems have not turned out to be just like our solar system.  The universe is more diverse than we supposed it would be.  And diversity means that everything is not alike: all the other planets out there are not like Earth.

Perhaps this diversity should not be a great surprise.  Over time we have learned that most stars are not like our sun: indeed the vast majority are apparently those very dim and small red dwarfs.  We seem to have even discovered that most of the universe is unknown stuff: “dark matter” and “dark energy” comprise the overwhelming majority of the universe; the “normal” matter and energy with which we are familiar is just a small component.  In other words, the universe is so diverse that the stars we see at night are not even typical stars (the red dwarfs are too dim to see), and the matter and energy that we see are not even typical matter and energy.

We have also learned that life does not just spontaneously spring from inanimate material.  The formation of life is a thing we do not understand, and it is rare enough that biologists think it may have happened only once on Earth, meaning all living things on this planet go back to one common ancestor.  And within life itself we have learned that for most of Earth’s history life was very simple, suggesting that complex life is not easily formed.  We also see that among the abundant forms of life that live on Earth, only one (humans) has what it takes to build advanced technology.  Intelligence is uncommon, even when life is present.

SETI, the Fermi Paradox and the absence of evidence for supercivilizations, the exoplanets, and the general diversity of the universe all suggest that what we learned about our solar system also holds true for the universe as a whole: when we assume that other planets (either planets in our solar system or exoplanets) will be like Earth, we assume wrong.  Star Wars is built on that assumption that other planets will be like Earth.  Our universe appears to not be loaded up with technologically advanced intelligent extraterrestrial life.  In all likelihood, there is no Jar Jar Binks out there.  This is a big change in our view of the universe.  It is probably a change comparable to the Copernican Revolution.  It is a change that makes the Star Wars universe not scientifically plausible.

But more on that in Episode IV (in two weeks—Click here)….