With astronomical observations being no help, Galileo looked for proof of Earth’s motion in a common Earthly phenomenon: the tides of the ocean.  The level of the ocean rises and falls every day at beaches and harbors on seacoasts everywhere.  Galileo argued that this rising and falling—the tides—was evidence of Earth’s motion.

Consider:  What are the oceans but giant basins filled with water?  What are seacoasts but the edges of those basins?  Now, how do you make water in a basin rise and fall along the edges of the basin?  There is only one way to do this: you make the water rise and fall by moving the entire basin unevenly; that sloshes the water back and forth, causing it to rise and fall at opposite edges of the basin!  Put a basin of water on the floor of your car; then step on the gas, and then the brake, and then the gas, and so on; the water will slosh everywhere.  If, on the other hand, the car just sits (or even moves at a steady speed in a straight line), and you don’t touch the water, that water will just sit in the basin. 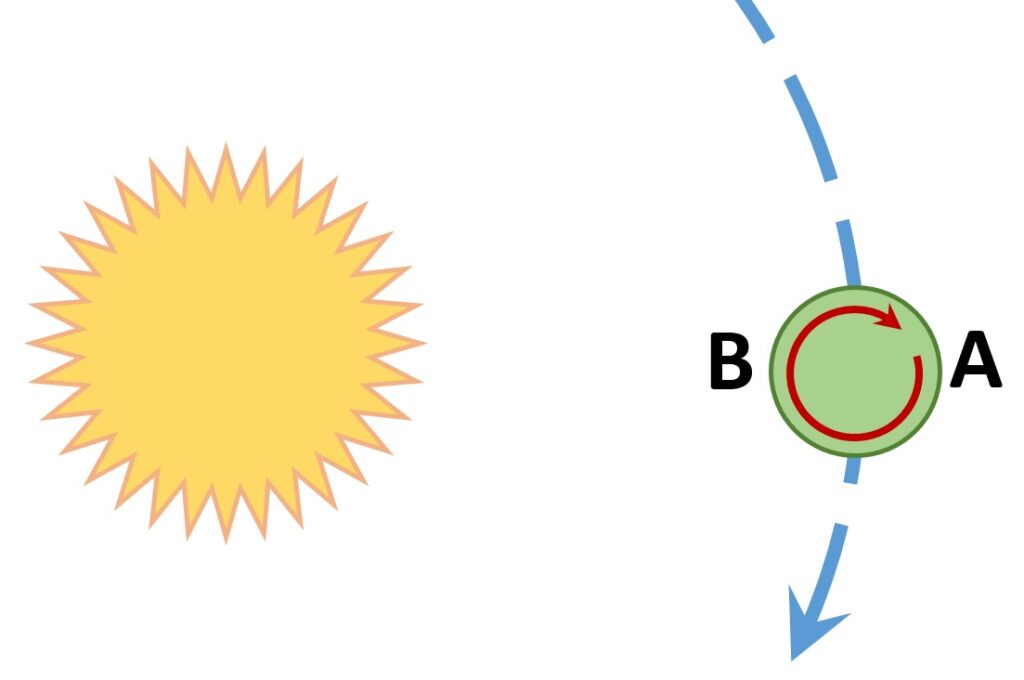 Voila!—uneven motion.  This uneven motion must slosh the water in the oceans, causing the tides.  All this Galileo described in a January 1616 letter to a Cardinal Allesandro Orsini (put your usual image of a Roman Catholic Cardinal out of your mind—Orsini was born in 1593; he wasn’t 25 years old at the time).

There seemed to be one problem with all this:  If this uneven motion was the cause of the tides, then the oceans should slosh toward one direction on account of the noon-to-midnight speed-up, and toward the other direction on account of the midnight-to-noon slowdown.  There should be one “up slosh”, or high tide, and one “down slosh”, or low tide, each day.  Thus there should be twenty-four hours between one high tide and the next, and twelve hours between high and low tides.  But in the Mediterranean Sea there are two high tides and two low tides each day, and therefore six hours between high and low tides.

[T]he approximately six-hour period commonly observed is no more natural or significant than any other; rather, it is the one which has been observed and described more than others, since it takes place in the Mediterranean Sea around which all our ancient writers and a large part of the moderns have lived.  The length of this Mediterranean basin is the secondary cause that gives its oscillations a six-hour period; whereas on the eastern shores of the Atlantic Ocean, which extends to the West Indies, the oscillations have a period of about twelve hours, as one observes daily in Lisbon, located on the far side of Spain; now, this sea, which extends toward the Americas as far as the Gulf of Mexico, is twice as long as the stretch of the Mediterranean from the Strait of Gibraltar to the shores of Syria, that is, 120 degrees for the former and 56 degrees for the latter, approximately.  Thus, to believe that tidal periods are six hours is a deceptive opinion and it has lead writers to make up many fictional stories. [He then goes on to discuss how complex the tides get within portions of the Mediterranean.]

If you have any familiarity with Atlantic Ocean tides, O Reader, you immediately recognized the “strange” part of this tale.  The business about an Atlantic Ocean twelve-hour period between tides is bogus.  The period is six hours in the Atlantic.

Somewhere along the line Galileo learned he was wrong about the Atlantic tides.  The historical record shows that at least by 1619 he was told of this, as one Tobie Matthew reported as much in a letter to Francis Bacon.  And Galileo, in his 1632 Dialogue Concerning the Two Chief World Systems—Ptolemaic and Copernican (sixteen years after his letter to Cardinal Orsini), omits all mention of the Atlantic, and still sticks with the idea that the six-hour tide period is a characteristic of the Mediterranean.  What Galileo says in the Dialogue is—

Six hours, then, is not a more proper or natural period for these reciprocations than any other interval of time, though perhaps it has been the one most generally observed because it is that of our Mediterranean, which has been the only place practicable for making observations over many centuries. [He then again goes on to discuss how complex the tides get within portions of the Mediterranean.]

So much for Lisbon, the 120 degrees and the 56 degrees, and all that.  From a scientific perspective, this seriously un-cool.  When I am teaching my students how to perform physics experiments, I always emphasize that one cannot selectively choose one’s data.  If you are measuring the acceleration due to gravity by timing the fall of a ball, and not all of your times are in agreement, you cannot just ignore the ones you don’t like.  You have to report all the data you have, both the data you like and the data you don’t like.  You can then try to explain away the data you don’t like, if you think you have good reason to do so, but you cannot just leave it out.

And in the end, leaving out the Atlantic Ocean did not make the problem of the tides period go away.  Consider, for example, the Church officials who investigated the Dialogue (the Dialogue is the book that Galileo was put on trial for) after it was published.  After describing Galileo’s tides theory one official wrote:

In science, it never pays to leave out the data.  It was strange, and un-cool, that Galileo did that while trying to prove that the Earth moves.

P.S. We now understand the tides to be a result of the gravity of the sun and the moon, not of the Earth’s motion.