This is the third in a series of posts on the subject of Galileo and proving the Earth’s motion.  The first post was on how even books for children and travel books state (incorrectly) that Galileo proved that the Earth circles the sun like Copernicus said, and how those books probably make that statement because occasionally even reputable sources do.  The second post was on some strange things about Galileo’s efforts to argue that the tides of the sea were evidence for the Earth’s motion, and how he left out some data when he made his tides argument in his 1632 Dialogue Concerning the Two Chief World Systems—Ptolemaic and Copernican.

I noted in the second post that in Galileo’s time, telescopic observations were unlikely to prove Earth’s motion.  This was because, prior to the invention of the telescope, Tycho Brahe had proposed a geocentric theory in which the planets circled the sun, while the sun, moon, and stars all circled the Earth.  This theory was mathematically and observationally identical to Copernicus’s heliocentric theory as regards the Earth, sun, moon, and planets.  Like a wind-up toy where one part or another is grabbed and held on to, the “machinery” of both systems was the same: in Brahe’s theory the Earth was held immobile; in Copernicus’s the sun was.  Galileo’s telescopic observations proving Venus circles the sun, for example, proved nothing about Earth’s motion.  Venus circled the sun in both Brahe’s theory with its immobile Earth, and in Copernicus’s theory with its moving Earth.

However, in Copernicus’s theory Earth moved with respect to the stars, whereas in Brahe’s it did not.  You might, therefore, think that observations of the stars could prove one theory over the other.  However, Copernicus had specified that in his theory the stars were so far away that the Earth’s motion was nothing by comparison, and so observing the stars would reveal nothing.

His proposed instrument consisted of a pole or beam, a telescope, and a lot of distance.

Imagine, he says, an open plain.  On the north side of the plain is a mountain.  Atop that mountain is a chapel.  Galileo imagines mounting a horizontal beam of wood or some other material above the roof of the chapel.  Then, he says,

I shall seek in the plain that place from which one of the stars of the Big Dipper is hidden by this beam which I have placed, just when the star crosses the meridian.  Or else, if the beam is not large enough to hide the star, I shall find the place from which the disc of the star is seen to be cut in half by the beam—an effect which can be discerned perfectly by means of a fine telescope.

The idea is this: as Earth moves, the star will (when observed under the same conditions at some later date) peek out on one side or the other of the beam, owing to the change of Earth’s position relative to the star.

Galileo consistently reported that telescopes showed stars to be disks measuring 1 to 5 seconds of arc in apparent diameter.  For example, in the Dialogue he writes,

[T]he apparent diameter of a fixed star of the first magnitude is no more than 5 seconds… and the diameter of one of the sixth magnitude measures 50 thirds [5/6 seconds]….

The figures below show a representation of the appearance of a star as seen through a very small telescope such as Galileo’s,* next to simulations of the beam cutting the star in half and revealing Earth’s motion in the manner Galileo envisioned.

Left—a star seen through a telescope of very small aperture. This illustration is from the Treatise on Light by the nineteenth century astronomer John Herschel (son of William Herschel). Center—simulated view of the star supposedly divided in half by Galileo’s distant beam. Right—simulated view showing how, after a period of months, the Earth’s motion relative to the star might cause the position of the beam against the star to change ever so slightly, proving that Earth indeed moves. If, after one year, the star is once again divided in half by the beam, then Earth’s motion around the sun (in which it returns annually to the same place) will be clearly demonstrated.

Stars appear very small in a telescope like Galileo’s, so these views might better simulate what Galileo was saying would be seen.

A second of arc is small: 1/3600 of a degree.  The moon has an apparent diameter of half of one degree, or 1800 seconds of arc, so the stars and the beam when viewed through the telescope would all be but a tiny fraction of the apparent size of the moon.  Were Galileo’s beam about 10 cm (4 inches) thick, and were he viewing it with his telescope from a spot on the plain about 12 miles (20 kilometers) away, it would have a width of a second or two of arc, and be about the right size to divide a typical star in the way Galileo suggests.  No doubt finding the exact right spot to line everything up and make this idea work would be quite a challenge!  But beyond the challenge of making the idea work, there is something strange in what Galileo has said here. 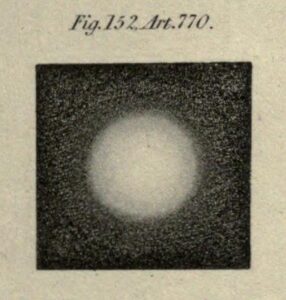 Unlike Galileo, John Herschel (who lived three centuries later) understood that the appearance of a star in a small telescope is entirely spurious: This is not the body of a star, as Galileo thought, but an artefact of light formed inside the telescope.

This is, in fact, how astronomers first began to figure out that the star disks were spurious.  They watched the moon pass in front of stars.  They noticed (to their surprise) that the moon did not cut into a star and gradually cover up the star’s disk.  Rather, the moon had no effect on the star at all for a while, and then suddenly the star winked out all at once (when the moon finally covered the true body of the star, which is just a vanishingly small point as measured from Earth).  But at the time of Galileo and the Dialogue, no one had realized this.

So, if the telescopic disk of a star does not exist outside the telescope, and if it cannot be cut in half by some beam placed between the telescope and the star, then Galileo’s reference to cutting a star disk as “an effect which can be discerned perfectly by means of a fine telescope” is strange indeed.  It seems Galileo just made that up.

In science, it is not cool to just make things up!  It is not cool to declare an effect that cannot happen to be perfectly discernable.  In science, it is not supposed to pay to make things up (although I do not know that Galileo was ever called out on this, like he was on the tides question).  It was strange, and un-cool, that Galileo did just that while trying to prove that the Earth moves.

So, Galileo left out data that went against his argument that the tides of the sea show that Earth moves.  And Galileo made stuff up for his argument that certain kinds of star observations could show that Earth moves.  But wait!  There was another scientific no-no that Galileo committed in this area… and that will be the subject of a future post.

*If you have a telescope of your own, you can see this appearance for yourself.  Fashion a cover that blocks the entire aperture of the telescope (construct the cover from thin cardboard, such as a cereal box).  Then cut a clean hole, the size of a small coin like a U.S. dime or a Euro cent, in that cover.  Now use your telescope to look at a star.  Once you have the star centered in the telescope’s field of view, put the cover over the telescope’s aperture, so the only light entering the telescope enters through the coin-sized hole.  You will see stars roughly the way Galileo did.  They will look nice and round, just like in the figures here.