The old astronomer tells the tale… Many years ago, when there was only one telescope on Mauna Kea in Hawaii, astronomers were expected to actually work inside the telescope dome at 15,000 feet rather than observing from a remote office somewhere down the hill. During that epoch, a famous astronomer went up Mauna Kea for the first time to observe. 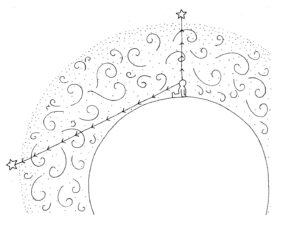 (Cartoon by Ann Drogin, from an early edition of Turn Left at Orion)

Astronomers are very careful to keep detailed observing logs of what they observed, the weather conditions, etc.; also, they need to keep a record of which exposures were recording your target, which were standard stars, etc. It matters how high up in the sky your object was, that is to say how much atmosphere you were looking through, and in those days the time of each exposure was the data you needed to calculate the amount of “air mass” you were looking through.

The astronomer had been warned that working at high altitude might cause some problems, but as it happened he felt fine during the entire run. Convinced that he just had good “altitude genes” – perhaps explaining why he was such a better-than-average astronomer – he congratulated himself on an excellent observing run.

Unfortunately, his logbook said otherwise. Once he got back to sea level, he discovered that he could not understand anything he had written in the notebook!