The old astronomer tells the tale… People think that astronomers come in two varieties, observers and theorists. But in fact there is a third group, a lively bunch of laboratory experimentalists who help the rest of us understand what we observe and what we need theories to explain. For example, it’s not enough to take spectra of stars or planets; you have to know what each of those lines and dips in the spectra mean. That requires work in the lab to measure the spectra of pure elements, or minerals, or the kinds of gases you might expect to find in a planet’s atmosphere. 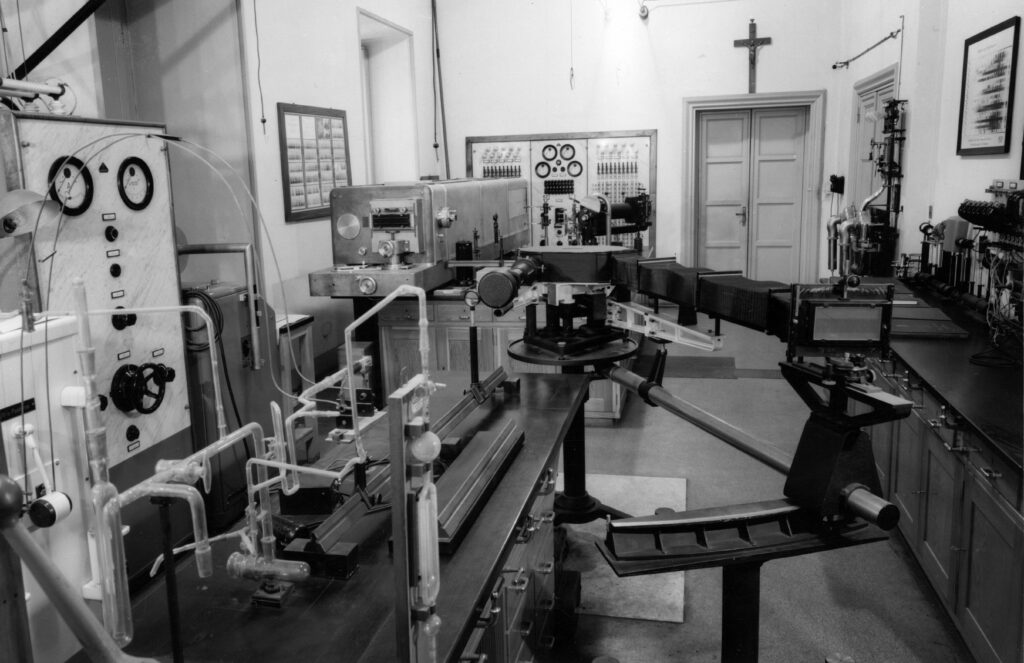 The Vatican Observatory had a lab in the 1940s-70s that measured the spectra of pure metal vapors; this photo shows it around 1960

The first step was to build a container that could hold these gases… a long steel tube, one meter wide and hundreds of meters long, running the length of the Lunar Lab at the University of Arizona. Mirrors were put at each end, so that the light introduced at one end would bounce back and forth many times, adding up to more than a kilometer path length to absorb the different wavelengths when the light finally reached the detector in the lab.

But of course, the pole would have to be high enough to catch the sunlight even during the winter, when the sun is lowest in the sky. How high would that be?

The lab guys went to the theorists, who looked up the lowest elevation of the midday sun during the dead of winter, the height of the building, the lengths of the shadows, the position of the pole in the parking lot… the kind of calculations that used to make up astronomy back in the 19th century. I forget the exact number they came up with; let’s say, 18 feet… the mirror had to be 18 feet above the ground. So the lab guys went out and arranged for a pole to mount their mirror. They got a pole that was 18 feet long.

Only when it was mounted into the parking lot did they realize that they should have added a few more feet, enough to be buried so that the pole would not tip over.

They never did any lab work during December or January.

Don’t let our work fall over (that’d be no fun) – help support us!