The old astronomer tells the tale… Yesterday we talked about the problems of getting rid of the gas in the absorption tube after its spectrum had been measured. Just piping it outdoors left a telltale red spot, so for the next gas the lab personnel decided to be more clever.

Along with inorganic chemicals like the ones mentioned yesterday as possible constituents of Jupiter’s atmosphere, there were many organic molecules that might exist there; most of them presumably derived from broken-up and reassembled bits of simpler, more basic compounds such as HCN, better known as hydrogen cyanide. So the tube was dutifully filled with cyanide and the spectrum measured. Now, to get rid of the cyanide…

Even astronomers know that this chemical is deadly. They also knew that it could be dissolved in water, so their first step was to pump the gas into a glass beaker of water; then, all they had to do was to get rid of the water. This should be easy enough, right? This is Arizona! Water evaporates quickly. 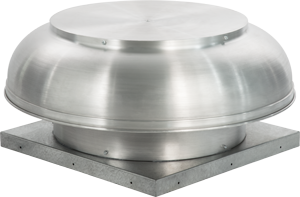 This is not a flying saucer. But is it an intake or an exhaust vent? They don’t teach you that in graduate school… (Image from captiveaire.com, who will happily sell you one of these guys)

While no one was looking, they took their beaker up to the roof of the building. Noting the large air conditioning vents there (this is Arizona!) they carried it to the corner of the roof farthest from those vents… uncovered the beaker… and waited for it to evaporate away.

Meanwhile, in another room of the building, the graduate students were assembled to hear one of their own presenting his research on his thesis topic, an obscure observational technique (that never did work). As they were pleasantly drifting off to sleep in the seminar room, a professor with a chemistry background suddenly leapt to her feet.

“Everyone out of here!” she exclaimed. “I smell cyanide!”

The building was evacuated. The campus patrol and fire department came to look for the source. And someone went up to the roof to warn the guys up there… who were standing as far as possible from the air conditioning exhaust vents, not realizing that this put them exactly next to the air conditioning intake vent…