Tomorrow is the last day!!

The old astronomer tells the tale… So I can hear you asking, after yesterday’s tale of cyanide vented into the air conditioning system, what ever happened to that glass beaker of water and cyanide?

The truth is, I don’t know. But according to the story I heard… after the guys on the roof were informed that the campus police were on their way to the roof, to check out the source of the building’s contamination, they quickly fled back to their lab, glass beaker of water with dissolved cyanide in hand. Now what to do? Well, if the Arizona heat would promote its evaporation, probably keeping the stuff cool would slow things down, and keep the cyanide from poisoning the lab. So someone shoved it into the lab refrigerator. Better yet, into the freezer compartment of the refrigerator. 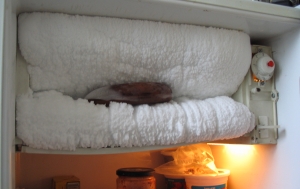 The clouds of Jupiter are thought to be water ice with organics frozen into them…. those of us of a certain age will recognize this phenomenon in the freezer section. (Image from the “californiaappliance.homestead.com” website)

Where it was immediately forgotten. Until, several months later, someone opened the freezer to put something else in and discovered a beaker of ice.

Did I mention, this was back in the 1970s? The fridge they had was old, even for those times. It did not have a self-defrost feature. So the glass beaker was in fact encased in a several inch thick layer of frost. It could not be removed.

The story (which I certainly hope is not true) ends with a tale of a visit to the lab early one Saturday morning with pickup truck, and a drive out into the desert…

Break out of your frozen state, and send us ten bucks!