We’re running a membership drive this month – today is the last day – and as a part of it we’re including this blatant clickbait series… Besides, it’s a chance to tell some of the funny stories that come up during cloudy nights at the VATT!

The old astronomer tells the tale… this story is all on me. It was nearly 50 years ago (January, 1973) and two friends of mine and I had arranged to do an undergraduate research project during MIT’s January intersession (IAP), five nights observing the Moon at the Wallace Observatory outside of Boston. There we had access to a 16 inch aperture telescope, and a filter wheel photometer. 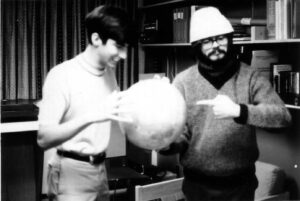 Greg and Scott, my collaborators at Wallace Observatory, looking at the Moon.

Think of the photometer as a one-pixel electronic camera: a phototube with a phosphor at one end to turn light into electrons, which would be slowly accelerated down the length of the tube until they had enough energy to register as an electric current. Before the light hit the tube, it would pass through a series of small colored glass filters, so that each reading would tell us a different spot of color in the spectrum of our objects. These filters were well calibrated, the same set having been used on a number of bright objects in the solar system such as various spots on the lunar surface, the planet Mercury, even the bright asteroid Vesta. After each observation, we would send a signal to the tube to rotate the filter wheel one click, and bring the next filter into the light path.

Our task would be to use this system to re-observe a spot on the Moon that had been used as the standard spot against which all the other observations were calibrated. The real calibration, of course, was to see if we could use the telescope and the photometer without breaking anything.

The Wallace Observatory is not too far out of town, so we slept on campus during the day (normal behavior for undergraduates), got up in the late afternoon, and drove out to the observatory. Our first night… it was cloudy. Second night: cloudy. Third night: cloudy. Fourth night, things were beginning to clear; that’s when we realized there was no dry ice to pack around the phototube to cool it down and reduce electronic noise. We drove into the local town and found an ice cream shop where we could get some dry ice. (If you are keeping track, 1973 was the year that Steve Herrell opened “Steve’s Ice Cream” in Somerville and began the tradition of store-made ice cream mix-in parlors.) When we got back to the dome, it was cloudy. 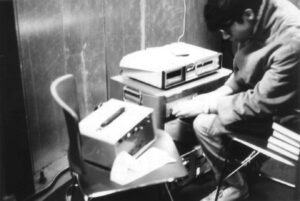 Greg was downstairs at the electronics. Can’t blame him for what followed.

Finally, on our last night, everything was ready to go. The sky was clear, the Moon was bright, and all the electronics seemed to be working. One of us steered the telescope to the right spot on the Moon; one of us started the photometer; one of us was downstairs, below the telescope, where the results would be printed out on a strip of paper. “No signal” we heard from him. Click the filter wheel. “No signal.”

I looked into the big metal box attached to the telescope where the filter wheel and the photometer were mounted. The moonlight was bright enough that I could see the spot of light that should have been hitting the filters. Unfortunately, the light was hitting the metal between each filter. Somehow the filter wheel had been misaligned.

“There were two different alignment holes that fit over a peg. I guess I guessed the wrong one,” one of us confessed.

Rather than dismount the whole apparatus, it seemed to me that all we needed to do was loosen up the bolt holding the filter wheel in place, pull it out a bit, shift it over to the other hole, and start again. I loosened the bolt; the wheel wouldn’t move. I loosened it some more; still no movement. Finally, I had the bolt completely out, in my hand, and the wheel still would not move. Then I realized the photo tube itself was preventing me from pulling the wheel off its peg so that I could realign it. So I yanked on the phototube back a centimeter or so. Now the wheel was free. 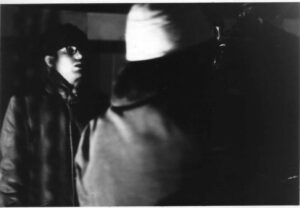 In the dome, looking puzzled.

Very free. With no bolt to hold it into the metal box, it rolled completely out of the box. Onto the floor. Bounce. Then, it did a right turn, and unerringly found the path to the metal circular staircase leading downstairs to where my friend sat with the electronics. It raced to join him. Bounce… bounce… bounce… each bounce bending the thin metal at the edge of the tube where the filters were; and breaking each filter, one by one.

Three important results came from this observing run. First, the professor in charge of the experiment, having calibrated my skills, made sure to never do any further work with me. (We did actually wind up about 45 years later as coauthors on a paper, ironically about Vesta, which he had first observed with those filters long ago.) Second, the student who was going to do her thesis by observing Mercury with these filters vowed to murder whoever it was that delayed her work. (She didn’t learn until many years later that it was me. She eventually went on to be the director of the MMT Observatory on Mt. Hopkins outside Tucson.) Third, Scott went on to become a math professor, Greg taught classroom physics, and I became a theorist; from that point on, the only thing I worried about dropping was my box of computer cards. But that’s another story…