The old astronomer tells the tale… “It was after 9/11, about a year or two after, and we were meeting in Rome, Jesuits in science from all around Europe. France, Germany, Portugal were all represented; and of course Jesuits from Italy… not to mention us from the Vatican Observatory. After the meeting, like all good scientists, we gathered in a local bar to shoot the breeze. Of course, this being Italy, the bar was a coffee bar and we were downing espressos (at 10 pm? Hey, live dangerously!) and telling tall tales. English, of course, was the one language we all had in common. 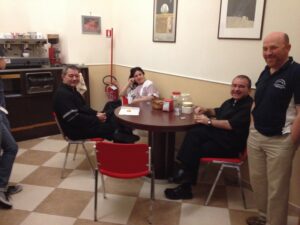 Daily coffee is also a tradition at the Specola; this was in the morning, though not at 10 pm!

Out of nowhere one of the Italian scientists, a master of his biology lab, launched into a caffeine-fueled screed. “I hate terrorists,” he informed us all in his thick Neapolitan accented English. That seemed like a non-sequitur, but I figured to hear him out. “Whaddaya gonna do? Arrogant, pushy, know-it-alls. Don’t know how to listen. Don’t even try to listen to anyone else. Never seem to notice when no one else give a damn, matin’ no sense, talk talk talk, making nuttin’ but noise, living in dere little own world, tinkin’ dey smarter dan da rest of us…”

It was five minutes into his rant before I realized he couldn’t pronounce the “th”.