We’re running a membership drive this month – our goal is 150 new members, and we’re well on our way – and as a part of it we’re including this blatant clickbait series… Besides, it’s a chance to tell some of the funny stories that come up during cloudy nights at the VATT!

The old astronomer tells the tale… A researcher asked to sign out the department truck in order to run an errand. The keys were duly handed over: a key ring containing a metal tag with the vehicle number, and two keys. 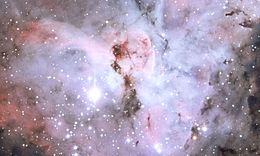 The Carina nebula, visible from the southern hemisphere, is sometimes called “The Keyhole”

Moments later, the frustrated researcher came running back to the office, keys in hand, insisting to the Admin that they were the wrong keys. A quick trip to the parking lot with the researcher confirmed that the department had only truck in the lot and it had the same vehicle number as the one hanging from the key tag.

“But the key won’t open the truck door,” insisted the researcher. He demonstrated the problem.

The Admin looked at him carefully. “Did you try the other key?”

(As you might have guessed, some of these stories came to us from someone who used to be an administrative assistant at a certain unnamed major planetary sciences department somewhere in southern Arizona…)