A few days ago Brenda Frye, in her article on the creation of complex nuclei in supernovae, concluded “As Carl Sagan first said, ‘We are starstuff!'”

Brother Guy recalled (approximately) Joni Mitchell’s words in her 1969 song “Woodstock:” “We are stardust, we are golden,” and wondered whether Sagan was the first to refer to “star stuff.” He wrote, “This would be a great research topic for Bill Higgins!”

Actually, this question has already been researched, in a fine 2013 posting by the Quote Investigator. It’s well worth reading. But I can add a few remarks to QI’s discussion. 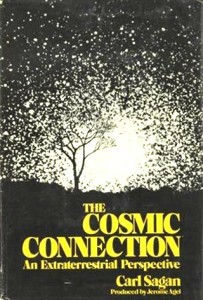 Cover of The Cosmic Connection

In his 1973 book The Cosmic Connection: An Extraterrestrial Perspective, Carl Sagan wrote:

All of the rocky and metallic material we stand on, the iron in our blood, the calcium in our teeth, the carbon in our genes were produced billions of years ago in the interior of a red giant star. We are made of star-stuff.

It seems to be Sagan’s third-most-popular phrase, after “Pale Blue Dot” and “billions and billions.”

Earlier astronomers and journalists had also said that people are made of “star-stuff.” (Most often, they hyphenate the phrase, so I will, too.) The Quote Investigator found examples from 1913, 1918, and 1929.

Poking around in Google’s gift to word-lovers, Ngram Viewer, I found that the phrase has an earlier history—but with a different meaning.

It was used simply to describe celestial matter, the material of which stars or nebulae or planets are made, without the connotation that star-stuff is the same stuff that Earth is made of.

A good example is found in the Glasgow Medical Journal for May, 1883, in which Robert Munro comments on a suggestion by a physicist—who would one day be known as Lord Kelvin—that life on Earth may have originated elsewhere in space:

Sir William Thomson, in accounting for the origin of life, had recourse to some stray star-stuff—a “moss-grown fragment from the ruins of another world,” which, like a little leaven, leavened the whole globe. But this is pure speculation.

(To this day, we have a few scientists speculating that life may have originated elsewhere and traveled through space to Earth. It seems pretty unlikely to me, but it’s not yet utterly ruled out by the science we know.)

Even earlier, in 1873, in his book on the plurality of worlds and extraterrestrial life, The Arena And the Throne, L.T. Townsend writes:

The supposition now generally approved is, that Saturn consists of an unsolidified mass of star-stuff in process of cooling…

And later, of the Moon, Townsend writes:

Its geological history has all the interest of a romance. It was once “fire-mist,” or “sun-stuff,” “star-stuff,” or “world-stuff,” as variously named, which is probably the original created substance, “light”—God said, Let there be light (sun-stuff), and light (sun-stuff) was.

Arthur Harvey, addressing the Astronomical and Physical Society of Toronto in 1896, attributes the phrase to German-speakers:

The Germans have an excellent word for matter scattered through space; they call it star-stuff; for, as a small seed may be the parent of a large tree, a minute particle of matter, now apparently errant in the so-called void, may be the nucleus of a huge star—one of the orbs to be, in that distant future when Arcturus shall have grown dim and Aldebaran have been in some way dissolved.

Harvey may have been on to something. In the February 1900 issue of The Writer, Mary Hall Leonard observed some recent trends in language in her essay “The Revival of Old English Words.” This was an era when German leadership in science was ascendant; many American physicists and chemists studied at German universities, and more learned to speak German in order to read leading journals. Perhaps this had some influence on an effect Leonard noticed:

The power to make compounds freely, which belonged to the older English, though in a less degree than to the German tongue, seems to be again coming to the front. It has been said that if Americans were as loyal as Germans they would say “mineral oil” instead of “petroleum,” “water-stuff” and “sour-stuff” for “hydrogen ” and “oxygen,” and “star-knowledge,” “earth-knowledge,” etc., instead of “astronomy,” “geology,” and the other names of sciences. Some of the great scientific men are, indeed, beginning to speak of “sun-stuff,” “star-stuff,” and “life-stuff,” and the word “soul-stuff” may be found in a recent literary book by Elbert Hubbard.

Scientists weren’t the only ones who spoke about star-stuff. In 1887, the poet and critic James Russell Lowell* uses an astronomical metaphor in discussing imperfectly-crafted poetry:

We are in the realm of chaos and chance, nebular, with phosphorescent gleams here and there, star-stuff, but uncondensed in stars.

In her weighty 1888 book The Secret Doctrine, the Theosophical occultist Helena Petrovna Blavatsky, explicating a mystical text, describes its cosmology:

This “matter,” which, according to the revelation received from the primeval Dhyani-Buddhas, is, during the periodical sleep of the universe, of the ultimate tenuity conceivable to the eye of the perfect Bodhisatva—this matter, radiant and cool, becomes at the first reawakening of cosmic motion, scattered through space, appearing when seen from the earth, in clusters and lumps, like curds in thin milk. These are the seeds of future worlds, the “star-stuff.”

So while “we are made of star-stuff” is a powerful idea, going back well before Carl Sagan, the use of “star-stuff” more simply, to refer to the ingredients of the cosmos, has not been uncommon. I’ll give the last word to Mark Twain in Tom Sawyer Abroad, 1894:

Since 1894, much effort in astronomy and astrophysics has been devoted to figuring this out. What with dust, gas, dark matter, and all the cosmic microwave photons, the universe seems to include not only star-stuff, but quite a lot of other stuff besides!

** There go “billions and billions” again!