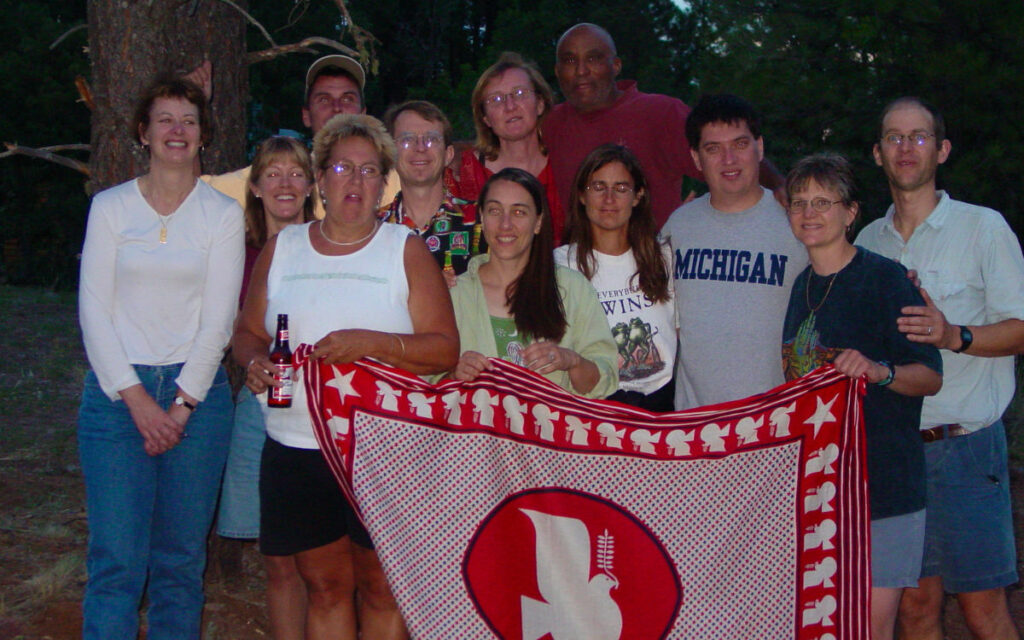 (Above… what my fellow Peace Corps Kenya volunteers looked like, some 25 years later…)

And then I wrote… In 2016 I was invited to be the first non-Mormon scientist to give the annual Summerhays Lecture on Science and Religion at Brigham Young University. I wrote about my experience (they treated me like royalty!) in a column published here. The first part of this lecture was published last week; here’s the conclusion.

Even if your community and your society encourages science, there is still the personal question: Why does any particular person choose to become a scientist? What does becoming a scientist get you? What is it that we’re trying to do when we do science? What constitutes success in science?

Back when I was in the Peace Corps, I trained with about 80 teachers, most of them right out of college, full of idealism. During the breaks between training, we would go out and play this game called hacky sack. The idea is that somebody tosses this bean bag in the air, and everybody takes turns kicking it up in the air—you kick it, you bop it with you head, you use anything but your hands and arms. And that’s it. It’s a kind of cooperative, feel-good activity. So, we’re stateside during training. The boyfriend of one of our group comes by to visit. He’s watching us play hacky sack. He’s from New York City. And this New Yorker couldn’t figure out what the heck we were doing. “What, you just kick it up in the air? No goals? No contact? No trying to stop the other guy from getting it? How do you win this game?”

Well, science is like hacky sack: it’s a cooperative activity. You gain status by how much you give, what you can add to the field, how much your work helps the others in the field. You try to keep lots of ideas up in the air to keep them alive and pass them on the next player. There’s never a moment when you need to say, “I won; you lost.” So what drives you to do it? What is your personal goal? How do you win this game? What do you consider winning?

Now, there are plenty of obvious criteria for what your university might consider signs of success—the kind of things that give you tenure. Grant money, prizes, honors, awards, the Macarthur Fellowship, the Nobel Prize. And then of course, there’s that all-time favorite metric of tenure committees: Have you written papers that other people use? The more papers, the more citations, the more successful you are.

Clearly, that’s not the whole picture.

There’s another carrot out there: academic freedom. In other words, you’re successful if you’ve reached a state where you can set the criteria of what you want to study. You’re free to choose your own topics. You’re not just working for someone else—you’re not just an employee, you’re not just a student, you’re not just limited by what NASA or NIH will pay for. But notice what that means: You win at science by being able to do science. It’s kind of circular.

Why is it that we want to do science? What do we get out of doing science itself? Indeed, are any of these things ends in themselves?

Before you jump to one conclusion or another, remember that if you’re not getting paid to do the work (and I assume you’re not independently wealthy) then you can’t do the work. You can’t afford to feed yourself; you can’t do any work at all. And if you’re not doing work that the culture respects and supports, then you’re not going to have very many other people to share the work with; and science is this conversation with other people. Internal satisfaction isn’t enough. Something else is the ultimate criterion. If you lose sight of that criterion, then the work is meaningless or poorly done.

I say we don’t do the science for “truth;” that’s too intangible. But we don’t do it for money, either—there are a lot of easier ways to make money. There’s no power in being a scientist. So why do we do it?

We do science for joy.

As people of the Book, we believe in a God who is the way, the truth, and the life. But most immediately, science is about a satisfaction and joy. Indeed, the spirituality of St. Ignatius, the founder of my order, the Jesuits, talks about God as the source of consolation without cause—joy that surprises.

There is a bridge that crosses the Charles River, from Boston to Cambridge. When I was a researcher at MIT, I’d walk across this bridge every day. By the time I turned 30, I’d be walking across this bridge and I’d be wondering, “Why am I going to work?” And I’d lie in bed at night, and have those 3:00-in-the-morning questions: “Why am I wasting my time doing astronomy when people are starving in the world? Isn’t this an almighty waste of my time in my effort in my life?” And I could not come up with an answer.

So I quit. I quit my position at MIT and joined the Peace Corps. I told them, “I’ll go anywhere you want me to go. I’ll do anything that you ask me to do.” So they asked me to go to Kenya and they asked me to teach. And when I visited the high schools where my fellow volunteers taught, I’d set up a little telescope, and the people in their village would come out and look at the telescope, and they’d look at the craters in the Moon and go, “Wow!”

Looking at the stars, wondering, “What are those stars? Who are we? How does it all fit together?” That’s one of those things that make us human beings, and not just clever cats. And to deny somebody that because they were born in the wrong continent, or gender, or social or economic group, or whatever, is to deny them their humanity. But to provide that to people enriches them and makes them more human; because it’s not only your body that has to be fed, but your soul, as well.