I invite you to consider the following:

A few years ago an article appeared in the Louisville, Kentucky (my home town) newspaper, the Courier-Journal.  The title of the article was “Climate change warming Kentucky, Indiana, report says.”  After it was published, on-line comments of the usual sort quickly piled up.  Here is one example of the threads that developed in the chain of comments:

Here is another example:

Consider the weather and what measureable quantities the average person might note about it.  I would argue that the measureable quantities that the average person might note are daily “Highs” (maximum daily temperatures), “Lows” (minimum daily temperatures), daily precipitation, and river levels.  These are very straightforward and easy to visualize—on a given day the High might be 74°F, the Low, 50°F; 0.5 inches of rain might fall; and the river might crest at 10.5 feet above flood stage.  In the case of Kentucky, long-term records exist for all of these quantities, and these data are available on the internet.

Temperature and precipitation data are available from the United States Historical Climatology Network (USHCN).  The USHCN “is a high-quality data set of daily and monthly records of basic meteorological variables from 1218 observing stations across the 48 contiguous United States. Daily data include observations of maximum and minimum temperature, precipitation amount…. Most of these stations are U.S. Cooperative Observing Network stations located generally in rural locations, while some are National Weather Service First-Order stations that are often located in more urbanized environments. The USHCN has been developed over the years at the National Oceanic and Atmospheric Administration’s (NOAA) National Climatic Data Center (NCDC) to assist in the detection of regional climate change. Furthermore, it has been widely used in analyzing U.S. climate.”  The data from the stations are available through a web interface from Oak Ridge National Lab.

Below are plots of USHCN data of daily Highs, Lows, and precipitation from Greensburg, Kentucky.  The Greensburg station is centrally located in my home state, and it has a nearly complete daily record going back into the late nineteenth century.  The plots run from the start of the year 1900 through the end of the year 2014.

What do you notice about these plots?  Not much, probably.  You can see the yearly seasonal temperature variations—the temperature plots rise and fall with winter and summer.  You can see some standout temperatures and some days of heavy rain.  But in none of them does some clear trend of long-term change meet the eye.

Now let us highlight the extremes—the hottest Highs, the coldest Lows, the wettest rains.  For example, the hottest day in the 115 years shown on the plots was July 28, 1930.  On that day the temperature in Greensburg reached an unbelievable 114°F.  The thermometer hit 110°F on three other days that summer.  The coldest days were January 24 and 25 of 1963.  On those days the low in Greensburg was −25°F, and two other days that month reached −20°F.  The wettest day in Greensburg by far was August 1, 1967.  Greensburg recorded over eight inches of rain that day.  The plots below show these and more—the top 25 hottest Highs, coldest Lows, and wettest rains are all highlighted.  Note that Kevin Z (from the comments above), who said most of the records for high temperatures took place in the late 1800’s and early 1900’s, and Mark R, who cited the 20’s and 30’s, were right.

Greensburg, Kentucky (USHCN station 153430) plots with top 25 extremes indicated with triangular points.  Note some points are very tightly clustered together.  Click on the plots to enlarge.

River data are available on-line from the National Weather Service (NOAA), but river records tend to be available in another way.  Communities that are located near rivers often have a strong memory of flood events, and often those communities commemorate great floods with public markers.  Louisville sits on the Ohio River, and we have a particularly nice flood obelisk at the McAlpine locks and dam in town.  The obelisk marks ten floods, the worst being the Great ‘37 Flood, an event of Biblical Proportions and a matter of local legend. 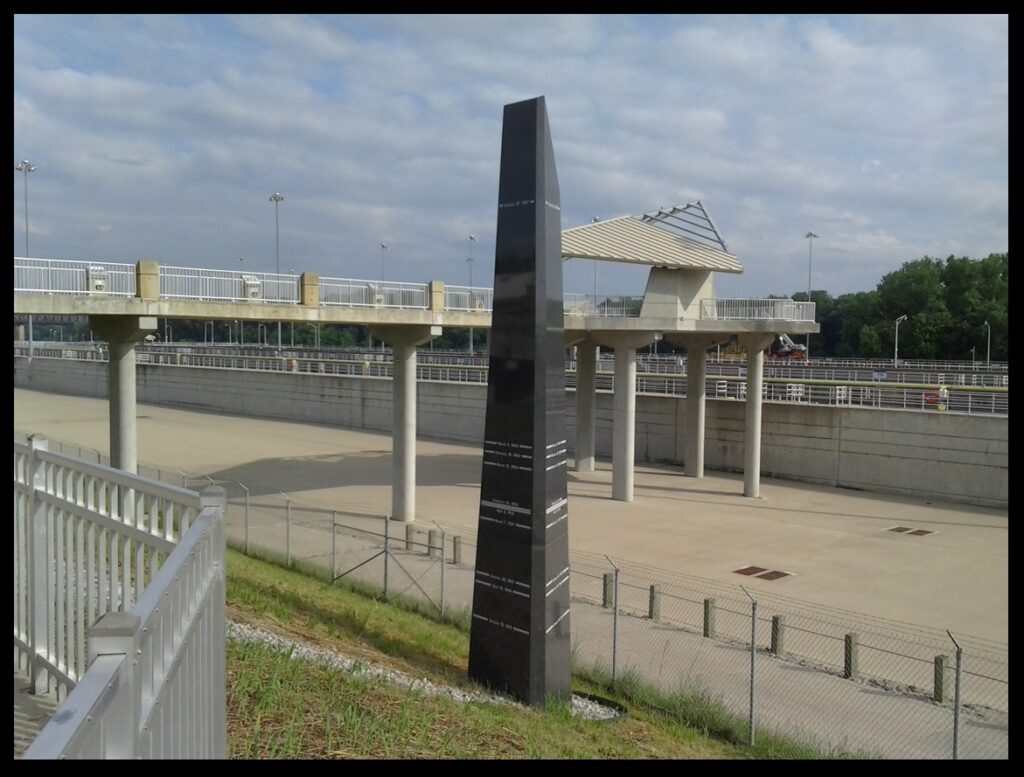 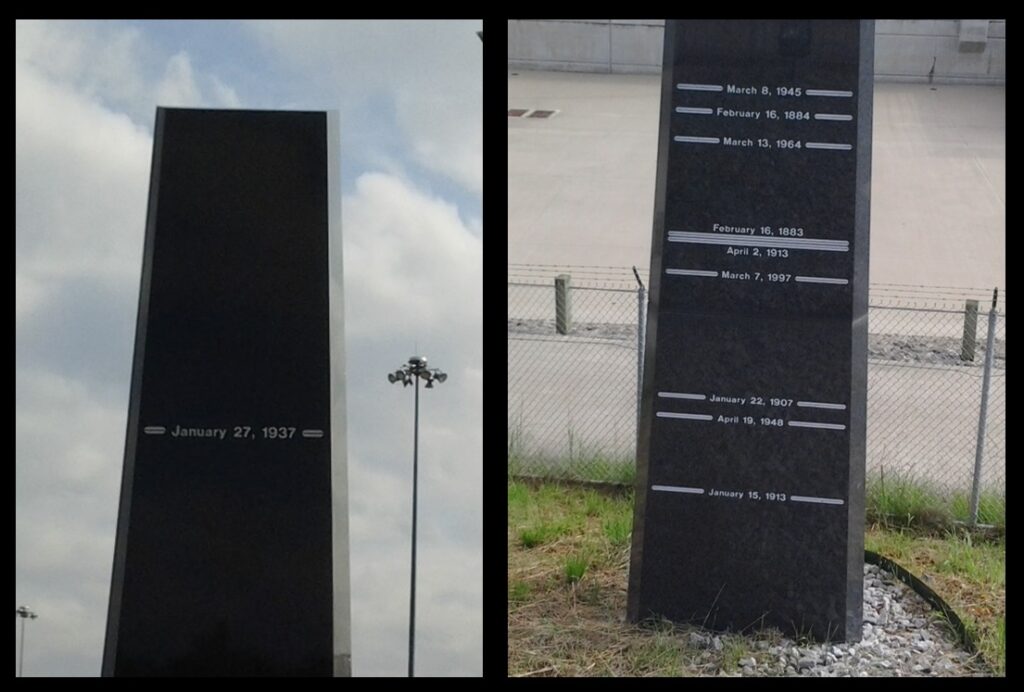 The floods commemorated on the obelisk.

The floods on the obelisk do not suggest a trend in flood events.  Below is a plot of flood crest data from the National Weather Service.  The data goes back well into the nineteenth century.  The ’37 Flood stands out clearly, and there are a number of lesser but still noteworthy floods, but as with the temperature and precipitation plots, there is no clear trend of change that meets the eye. 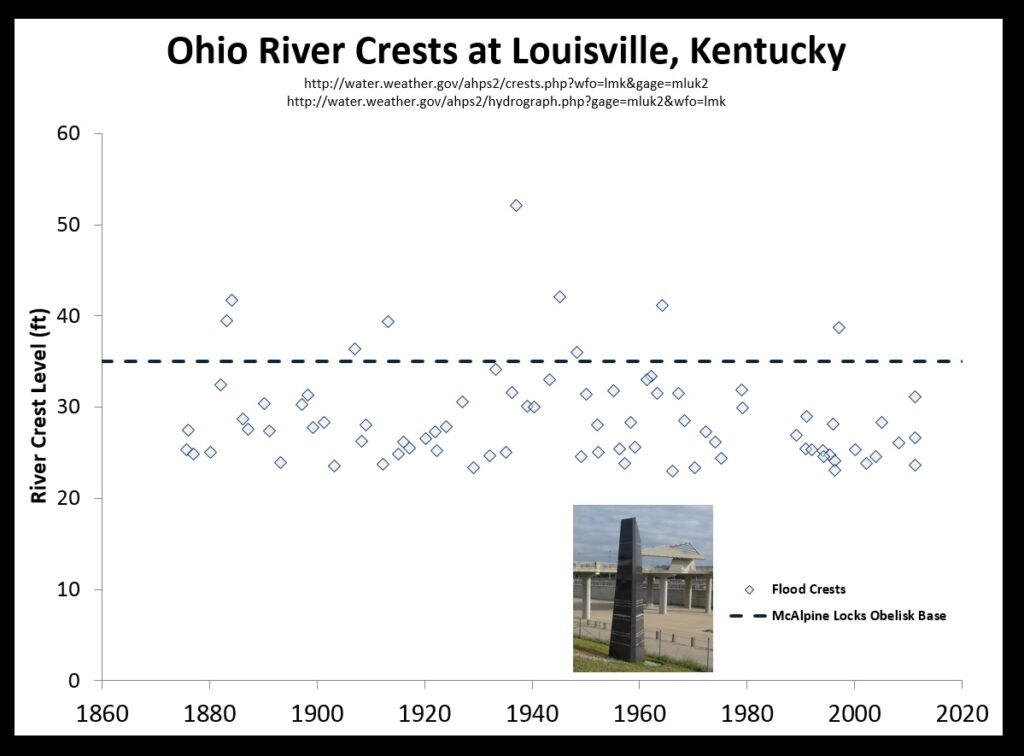 Plot of Ohio River flood crests over time at Louisville, Kentucky.  Data is from the National Weather Service.

What is perhaps most remarkable about all these plots is just how crazy things were in Kentucky in the first third of the twentieth century.  The 1930’s saw incredible heat and catastrophic flooding.  The 1910’s saw summer temperatures soaring to 105°F or more and winter temperatures plunging to −10°F and colder.  In the comments listed above, Paul D argued that climate skeptics “don’t have the data” to substantiate their claims.  But are not the record temperatures, and the markings on the McAlpine obelisk, data?

Moreover, are they not data that is more plain and clear to the average person than thousands of peer-reviewed studies (cited in the comments above)?  Climate skeptics who pay attention know all this.  Record high and low temperatures and precipitation falls are regularly stated in the local weather report.  The Ohio River’s flood levels are marked in towns all along the river.  People see these things and remember.  A very smart friend of mine who is a climate skeptic points to the record temperatures she sees on the weather each night.  “If global warming is real,” she asks, “why do all the incredible records date back decades ago?”  It is a valid, data-based question.  Moreover, some people remember the events of the 1930’s themselves, or have heard about those events from their parents or grandparents who witnessed them first-hand.  These people have personal or family experience with those events.

As a scientist (but not a climate scientist), I am forced to concede all of this to the climate change skeptics.  It would seem that, if I wish to argue with them, my arguments will be limited to what I have read regarding global measures of temperatures and CO2 levels, regarding ice cores and arctic temperatures.  And, of course, I can argue on the basis of scientific authority and consensus, and on the basis of my confidence in science itself—my confidence in the process that generates all those peer-reviewed studies.

But plenty of people, especially in Kentucky, take pride in not taking things on authority and consensus.  Plenty of people take pride in believing things based on what they, by way of common sense and experience, can determine for themselves.  They take pride in thinking for themselves.  And thus I have to grant some respect to the Kentucky climate skeptics.  I have to understand that, unless we really get into a respectful, detailed discussion, climate change is an argument I am going to lose with many intelligent and skeptical fellow Kentuckians who will point to the weather records, or the obelisk, and rest their case—scientifically, like the anti-Copernicans.  I think that those of us in the scientific community are doing science a disservice by tarring climate skeptics as a bunch of ignorant and politically motivated numbskulls.

You cannot have a respectful discussion, let alone build a convincing argument, with people you consider to be ignorant numbskulls.  This is important, because, in fact, the data featured in this post actually supports the existence of climate change in Kentucky.  It’s just that the effects are subtle.

It is a simple spreadsheet exercise to mathematically determine a “trend-line” for the data in these plots.  A trend-line analysis reveals some interesting things.  First, the precipitation plot reveals no significant trend.  There is the equivalent of a 1% increase in annual precipitation in Greensburg over the 115 years covered in the plot.  Second, the maximum daily temperature plot reveals a 0.5°F decrease in daily Highs over the 115 year period.  Lastly, the minimum daily temperature plot reveals a 2.0°F increase in daily Lows (if you look carefully at the Lows graph you just might convince yourself you can see a slight rise in the graph).  All of these trends—essentially no change in precipitation, a half-degree drop in Highs, and a two-degree rise in Lows—hold up even if the extreme temperatures highlighted in the graphs are discarded, meaning this is not just something driven by a few outliers.

In short, the data featured here show that Kentucky warmed from 1900 through 2014.  But Kentucky’s weather is wild enough that such a warming trend, which occurred entirely in the Lows, is not going to be obvious.  Moreover, the warming, because it involves warmer Lows, is not going to show up in the record temperatures that appear in the daily weather report; warmer Lows will not change record Lows.

I might be able to intrigue a climate skeptic with this data.  But, to do so will require some discussion, and that will only occur if we establish a respectful dialogue.  Recognizing the strengths of the skeptic’s position, and just being respectful in general, will help in that regard.

That skeptic might even be someone like my senator, Mitch McConnell.  McConnell was cited in the “Climate change warming Kentucky” article as dismissing the report and saying that “the vast majority of middle-class Kentuckians I represent actually have to worry about things like paying utility bills.  And putting food on the table.”  His views have probably been influenced by his experience.  He is from Louisville.  He has seen the obelisk, I am sure.   He will be a tough customer.

But I believe scientists can have a productive debate, even with tough customers, if we are respectful and willing to recognize (keeping those anti-Copernicans in mind) that sometimes the opposition in an argument about science is not anti-science.  Sometimes our friends, our family members, our co-workers, and others have solid reasons for thinking the way they do.

COVID-19: A Fit of Imperfection

Growth and Noise in Sales and Science

The Age of the Universe, Genesis, and Midnight Mass