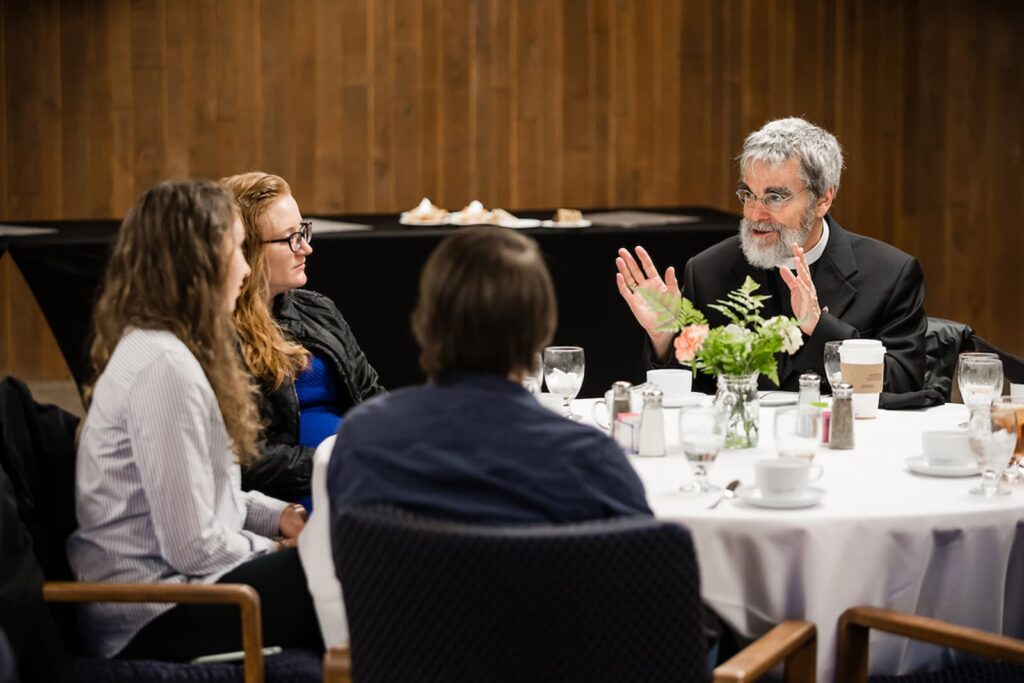 And then I wrote… In June of 2016 I was invited to give two lectures at Loyola University of Maryland for their annual Cosmos and Creation seminar. What follows is based on those talks…

What I do have is a lot of experience dealing with the public, 25 years at the Vatican Observatory, serving as an example how one can be both a scientist and a person of faith. And, in fact, there are lots of us in that position. There are lots of us who are good church-goers who also work (or play) in the rich fields of science and technology. You don’t have to be a professional scientist to be in that position. You might might be an amateur astronomer, a bird-watcher, a weekend archaeologist, a gardener, a computer hobbyist. But if you’ve ever been in a position where someone is startled to learn that you “do science” and go to church, then you know what those questions feel like.

As it happens, someone in my position, a very public scientist and a Jesuit (working at the Vatican, no less) is likely to find himself under attack from two different sides. There are, of course, the skeptics who think that a real scientist must reject religion. They tend to be suspicious either of my scientific bona-fides or, even worse, of my religious sincerity. (“He’s figured out a clever way to get funding for his research,” I overheard one fellow comment.) But even more problematical in my experience are those people who think they are being devout Christians by rejecting my science.

So, how do I answer tricky questions, especially questions from folks whom I consider my scientific colleagues or fellow believers? I don’t claim to be a master or exemplar on the matter… but I know someone who was. What did Jesus say? He spent three years of his life wandering the Holy Land, engaging both the ultra-devout and those outside religion, in the temple and in the market square. How did he handle the questions he received?

Of course, unlike Jesus we don’t meet in the temple or the market square, or even the parish hall, to debate points of theology. But that’s not to say we don’t have such debates. The difference is, nowadays you find these kinds of conversations online. In fact, the verse-by-verse way that these stories are told in the New Testament reminds me of the conversations I see on Twitter…

I can just see the Scribes tweeting: “Imagine 7 brothers; the 1st married, died childless; his widow marries his brother; the 2nd did the same, also the 3rd, down to the 7th. 1/2”

Then they tweet: “Last of all, the woman herself died. In the resurrection, whose wife of the seven will she be? For all of them had married her. 2/2 #gotcha!”

But Jesus tweets back: “You know neither scripture nor God’s power. In the resurrection they neither marry nor are given in marriage, but are like angels in heaven.”

And his next tweet: “Re: resurrection of the dead–haven’t you read “I am God of Abraham, Isaac, Jacob’? He is God not of the dead, but of the living. #notsofast”

Notice what Jesus does. First of all, He does not hesitate to engage those who would try to trap them. There’s a time when it’s better not to “feed the trolls”; there are other times, however, when the trolls must be confronted. When they bring the argument to Him, He is not afraid to respond. That’s His job, and He’s good at it. (That doesn’t mean that all of us must do that; we may not be as good at it as He is.)

Next, just as on Twitter, He is aware that He has two audiences… He’s speaking to his opponents, but He is also speaking to the wider audience that is listening. Sometimes we tweet (or argue) directly with the person talking to us and forget that each of us has a hundred or a thousand followers, with more who might find the retweets, and that audience may not know the backstory to our argument. Are we friends bantering, familiar with each other’s sense of humor, or are we strangers speaking rudely to each other? And even though we may be confident that the person we’re talking to knows scripture, or science, we can in no way be confident that the other thousand followers (we should be so popular!) get the references. We have to spell them out.

Even worse, of course, is playing only to the audience in our tweets, and forgetting that the poor person who first asked the question, who might be sincere, has merely become the butt of our clever cutting humor. We forget that they too can bleed.

Finally, notice how Jesus wins this argument. He changes the grounds. He doesn’t attack the logic of the Scribes and Pharisees – these are smart people, they can reason as closely as anyone can. But instead, he attacks the assumption that they made. Who says the widow has to be anyone’s wife? Indeed, most arguments are based on assumptions made without even realizing they are being made.

Then, he pulls back from the confines of the argument itself to the larger frame. The question of the resurrection is not about who gets to be married to whom. It’s a lot bigger question: it’s a question about the nature of God. Who is God? Who does scripture say that God is? If your conclusion runs against something as fundamental as that, then all the cleverness in the world won’t save you. You’ve made a mistake somewhere.

But notice another thing about encounters like these. For the most part, Jesus gets grief not from those who have lost faith, but rather those who think they’ve already got the faith and don’t have to look any further for it.

This parallels my own experience. Hostility from scientists does still happen, of course, and we’ll talk about that below. But except for a few aging white males (they tend to be biologists, and British) who are found more often on TV than in the lab, in my experience the scientists who don’t follow a faith are more likely to be quietly amused by my odd behavior than to show any overt hostility. For example, the host of the recent Cosmos TV show, Neil de Grasse Tyson, is hardly a friend of religion; but he’s a friend of mine. And he isn’t afraid to share that friendship in public.

Instead, I find the most troubling place where the science/faith debate occurs is in the pews. Our problems start with the “pharisees” of our own faiths who want to secure their own sanctity by heaping abuse on science.

And that makes me notice an interesting aspect in the example of Jesus engaging his Pharisees. That was a risky thing for him to do; and he knew it. He didn’t have to talk to them. There were plenty of religious sects of his time who separated themselves from the general run of society and its authorities, and hid out in monasteries in the desert. Likewise it would be easy to just let the anti-science faithful of our own faith their own way, to let them continue with their foolish preconceptions about science, as long as they don’t bother us. But Jesus didn’t do that; neither should we.

For one thing, that sort of prideful scorn is incredibly insulting to a large segment of our fellow believers. They deserve better than that. But it’s also incredibly dangerous to us and the science that we so love.

Once I gave a talk at the College of Charleston, a beautiful campus in Charleston, South Carolina, and after the talk an undergraduate came up full of enthusiasm. “I want to be a geologist!” he told me.

I could understand that. After all, my undergraduate degree is in geology, and it’s a great field full of great people. There’s all sorts of fun stuff you can do in geology, from the practical side of finding mineral resources, determining the safest and most respectful way of treating our planet, to the pure joy of just knowing how those minerals and rocks and mountains were formed. If you choose the right corner of geology, you can wind up working outdoors in some of the most beautiful locations on Earth. If you choose planetary geology, my field, you may even wind up some day walking on another planet.

“Sounds great,” I told him.

South Carolina. He was from the Bible Belt. In the culture where he grew up, studying geology with our ideas of billion-year-old rock formations directly contradicted the way he had been taught about the Bible. To be a geologist, for him, would be like declaring war against his religion, his home, his family. His mom would be ashamed of him.

Scientists are people. We have families; we have desires. Like every human being, we are a mixture of reason and heart, with hearts that have “reasons that reason does not know.” And like that student, we have to answer not only those desires inside us, but also the desires inside the people whom we love. If our students come from families who aren’t proud of them studying science, they won’t study science.

After all, consider this: there’s a lot of mountains and snow in India, and more people live in India than in Switzerland or Norway or Colorado (or indeed in all of the US or Europe combined). But India has never won any medal in the Winter Olympics. Winter sports at that level just aren’t supported by Indian society. For whatever reasons, there are very few mothers in India who dream of their daughter winning the gold medal in figure skating.

If the society you live in doesn’t think that doing science is the sort of thing that will make a mother proud, you’re not going to find very many kids who choose to study science… much less, persevere in their study. You also will have a hard time finding anyone who can teach you how to do it, much less anyone who’ll want to learn from you what you have to offer.

Remember that when you think about under-represented minorities in academia. I remember when a buddy of mine in grad school hit a rough patch, like every grad student does; but where my family gave me the confidence and the expectation that I would see it through, his mom just wrote back saying, “come home to Buffalo, Cliff! You can get a good job repairing color TV’s!”