Tomorrow (January 5) is Perihelion Day!  The Earth journeys around the sun in an orbit that is ever-so-slightly elliptical (the elliptical nature of the orbit is so mild that the orbit basically looks like a circle that is slightly off-center from the sun).  This means that the distance between the sun and the Earth varies over the course of a year.  Today is the day on which that distance is a minimum, and the technical term for the point of minimum distance between the Earth and sun is “perihelion.” 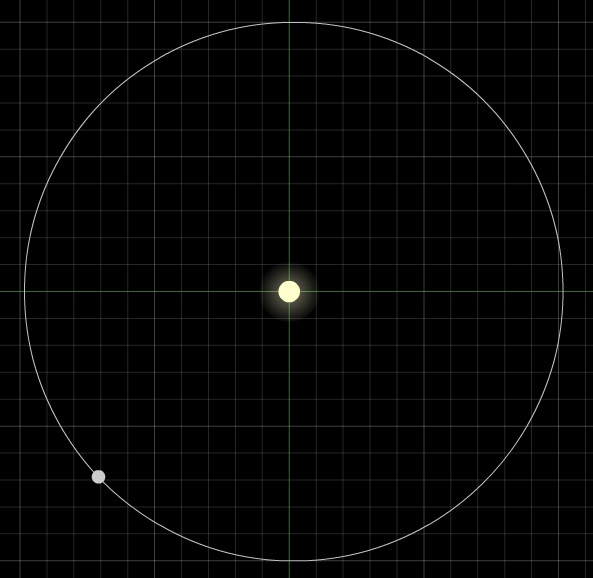 Today is also the day of the brightest sun of the year.  Since the distance to the sun is a minimum then the apparent size of the sun in the sky is a maximum (of course, as with the much-ballyhooed “Super Moons” that we hear about all the time, this effect is not very great). 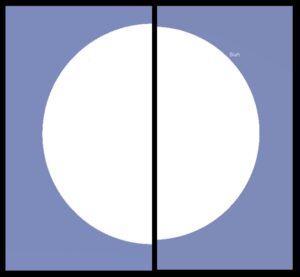 A thing I like to point out about perihelion is that it is a true Global Event.  Regardless of creed, calendar, or hemisphere, everyone everywhere on Earth experiences perihelion tomorrow.  So wish everyone you meet, and even all your social media friends from around the world, a “Pleasant Perihelion”!  It is the globally inclusive greeting!

When the Earth is at perihelion, it moves the fastest in its orbit.  Thus you could even wish everyone a “Pleasant Perihelion and a Happy Maximum Orbital Velocity Day”.  Earth is moving fastest because an orbit is essentially a fall; the Earth is falling toward the sun on account of gravity.  And this faster motion at perihelion turns out to have an effect on daylight. 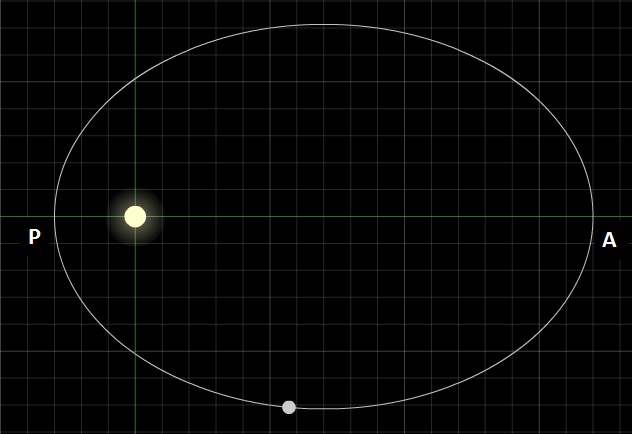 The Earth orbits the sun because it is essentially falling toward the sun by reason of the sun’s gravity.  Here the elliptical nature of Earth’s orbit is shown greatly exaggerated.  As the Earth travels from P, the perihelion point, toward A, the point of greatest distance from the sun (the “aphelion” point), it moves against the pull of the sun’s gravity, and so it loses speed—just like a ball that is thrown upward loses speed as it moves against the pull of Earth’s gravity.  Then as the Earth moves from A toward P, it moves with the pull of the sun, and gains speed—just like the ball gains speed as it falls back to earth.  Image from University of Nebraska-Lincoln.

We have daylight and darkness, day and night, because Earth rotates on its own axis.  We think of that rotation as being one “day”—24 hours—but in fact the time of rotation is 23 hours and 56 minutes.  That is, if you observe a star that is directly overhead one night, you will find the same star to be overhead again 23 hours and 56 minutes later.

The time for a person at A to be carried around the Earth by its rotation one time with respect to a star is 23 hours, 56 minutes.

So what about the 24 hour day, you ask?  Imagine that the Earth journeyed around the sun in a perfectly circular orbit, always moving at the same speed along that orbit.  Now imagine two people on opposite sides of the earth.  Person A observes a certain star being directly overhead.  At the same time, person B observes the sun being directly overhead (person B would be experiencing the “mid-day” point, halfway between sunrise and sunset).

Now we wait 23 hours and 56 minutes until the star is overhead again for A.  But during that time the Earth moves along its orbit, from position 1 to position 2 as shown below.  The star is so far away that this motion does not matter.  But the motion does matter in the case of the sun.  Therefore, as seen below, when the Earth is at position 2 and the star is overhead again for person A, the sun is not yet overhead for person B.  The earth has to turn a little more—four minutes more, so that B is at B’—in order for the sun to be overhead for B.  Thus a “day” measured by the sun is 24 hours while a “day” measured by the stars is 23 hours and 56 minutes.

Now remember that the Earth’s orbit is not a perfect circle; the Earth does not always move at the same speed along its orbit.  When the Earth is moving faster (like when near perihelion) it will move farther along its orbit during a given period of time.  The distance between 1 and 2 in the above diagram will be greater.  Therefore, the Earth will have to turn still more to reach point B’ so that the sun is overhead for B.  And therefore mid-day will arrive a little late.

This is why in the northern hemisphere the darkest evening of the year of was in early December, even though the shortest day was at the solstice on December 21 (and in the southern hemisphere the brightest morning was in early December even though the longest day was at the solstice).  As the Earth approached perihelion and moved faster in its orbit, mid-day began to arrive late at a rate that exceeded the rate at which the days were changing in length.  Because of the perihelion’s effect on mid-day, the period of daylight was drifting backwards against the clock, making the evenings brighter (and the mornings darker) than they would be if Earth were in a perfectly circular orbit.  The perihelion daylight drift occurs in both hemispheres.

So it is perihelion that is behind the strange business of daylight and the solstice that we encountered in the December 7 and December 21 posts!  Of course we have one more point to cover in all this—the date of the northern hemisphere’s darkest morning and the southern hemisphere’s brightest evening.  That is also about now.  The table below shows sunrise times at Castel Gandolfo (home of the Vatican Observatory). 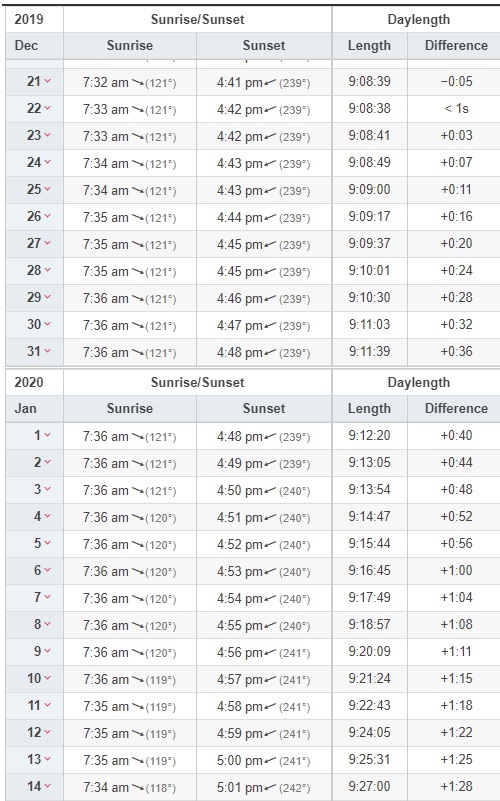 The sun rises today at 7:36 AM there, and this is basically the latest sunrise (give or take some seconds).  Note how there exists a period, from roughly December 29 through January 10, in which the sun rise time is largely unchanging at 7:36, even though the day length is getting longer with each passing day.  Between December 21 (when the solstice occurred) and now the perihelion drift had been winning out over the changing length of daylight itself, but that is now coming to an end.  From now forward through early June, northern hemisphere dwellers will see the days growing longer, and both the mornings and evenings growing brighter; southern hemisphere dwellers will see just the reverse on all accounts—shortening days, darkening mornings, darkening evenings.  (All the data here is from Date and Time.) 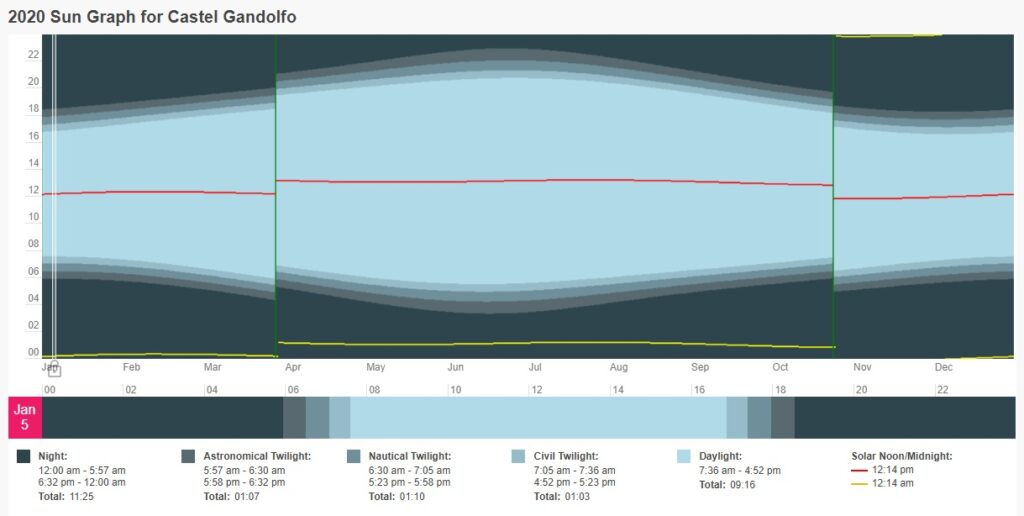 One final note:  I learned about the solstice and the daylight not through a study of astronomy; rather I learned about it firsthand when my son started taking a bus to school.  The bus came at a set time in the morning.  At the start of the school year (in late August), my son caught that morning bus in broad daylight.  As the semester progressed the mornings grew darker.  By December it was dark and gloomy when my son caught that bus.  I knew the days would grow longer after the December solstice, so I assumed that when Christmas break ended in January we would see brighter mornings.  I was wrong!  And disappointed.  When school resumed after New Year’s, the mornings were darker than ever.  Not until February did the mornings start to brighten appreciably, yet it was obvious well before then that the evenings had brightened a lot.  Trying to understand why in January my son was standing in the dark when waiting for his morning bus is what led me to investigate and understand the solstice and the daylight.

The universe indeed holds surprises for those who are attentive to it.  Many of these surprises require no advanced degrees or Advanced Technology Telescopes or other specialized knowledge or equipment.  Sometimes, all they require is a regular bus ride.