I once thought that the Copernican Revolution was about the modern scientific view of the universe displacing the old Earth-centered view.  Consider Neil deGrasse Tyson’s 2014 re-make of Carl Sagan’s “Cosmos” TV series, with its animated sequence about Giordano Bruno being condemned and burned by church officials for advocating that the stars were other suns, orbited by other worlds (if you have not seen the Bruno sequence, click here to watch it, and go to about the 16 minute mark).  This event has made Bruno a martyr to science in the eyes of some, since of course today science shows us that the stars are indeed other suns, orbited by other worlds.  Cosmos’s portrayal of Bruno has numerous flaws, not least of which is portraying Bruno’s opponents as a bunch of ugly orcs, but Cosmos got the basics right—Bruno and the modern scientific view against the old view. 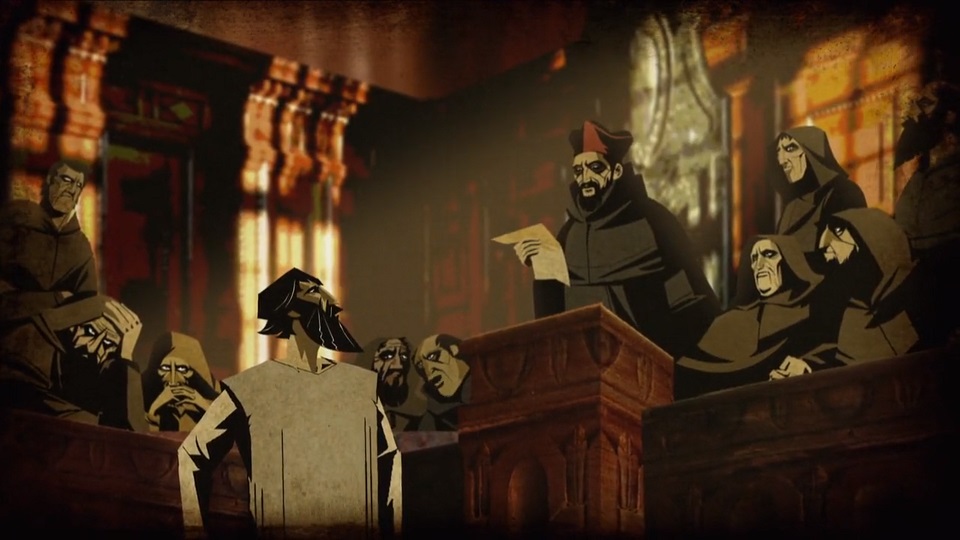 Bruno before a committee of orc-like church officials, from “Cosmos”.  The guy in the red hat is probably supposed to be St. Robert Bellarmine.

Or did it?  It turns out that, if you were a good scientist in Bruno’s time, you would never have believed that the stars were other suns.  Simple observation proved otherwise.  If you were a supporter of Copernicus, you believed that the sun was the unique central body of the universe, and the stars were not suns.  That was the belief of Johannes Kepler, arguably the most prominent Copernican scientist prior to Isaac Newton.  And to Kepler, it wasn’t a belief, but a fact—obvious to any Copernican who could perform simple measurements and engage in critical thinking.

Kepler’s thinking was as follows:

In in a Copernican universe the Earth orbits the sun, moving relative to the stars.  Thus certain stars should, for example, grow brighter and then fainter as seen from Earth as Earth moves toward them and then away from them as it orbits.  But no such “annual parallax” effect is detected.  The lack of parallax is explained by the stars being so distant that Earth’s orbit is like a point in comparison—utterly imperceptible.  However, astronomers since Ptolemy in ancient times had shown that stars in the sky have perceptible apparent sizes, as illustrated in the figure below.

The moon near the star Regulus in Leo, as shown by the Stellarium planetarium app.  Regulus here appears roughly 1/10 the diameter of the moon—the approximate size Ptolemy and others measured it to be. 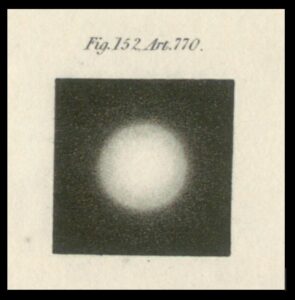 A star as seen through a small telescope, such as was used in the early seventeenth century.  This illustration is by the nineteenth-century astronomer John Herschel, from a treatise he wrote on light.

Early telescopes revealed that the apparent sizes of stars might not be as large as astronomers had determined with non-telescopic instruments, but they revealed apparent sizes nonetheless, and they increased the sensitivity to parallax.  The net result was still enormous stars.  Kepler estimated the star Sirius, the brightest star visible to the eye, to be larger than the orbit of Saturn.  Lesser stars were proportionately smaller, but still dwarfed the sun.

Kepler noted that since there are so many stars (especially when you add in all the stars visible with a telescope), the total area of the sky that they occupy must be a significant fraction of the area occupied by the disk of the sun.  However, their combined power of illumination is obviously insignificant compared to the sun.  Therefore, he said, although the stars must be vast in bulk, they also must be dim.

Thus, said Kepler, science shows that the universe consists of one tiny-but-brilliant sun, orbited by still-tinier planets.  This little solar system is then surrounded by giant-but-dim stars.  The stars might be on a spherical shell, or they might be scattered out to some indefinite distance (the problem with the latter case being that, the farther away the stars were, the bigger they had to be, as seen previously).  To Kepler, the fact that the sun was small, the planets smaller, and human being smaller still, was no big deal.  He described all this almost poetically in his 1604 book De Stella Nova:

Where magnitude waxes, there perfection wanes, and nobility follows diminution in bulk.  The sphere of the fixed stars according to Copernicus is certainly most large; but it is inert, no motion.  The universe of the movables [the planets] is next.  Now this—so much smaller, so much more divine—has accepted that so admirable, so well-ordered motion.  Nevertheless, that place neither contains animating faculty, nor does it reason, nor does it run about.  It goes, provided that it is moved.  It has not developed, but it retains that impressed to it from the beginning.  What it is not, it will never be.  What it is, is not made by it—the same endures, as was built.  Then comes this our little ball, the little cottage of us all, which we call the Earth: the womb of the growing, herself fashioned by a certain internal faculty.  The architect of marvelous work, she kindles daily so many little living things from herself—plants, fishes, insects—as she easily may scorn the rest of the bulk in view of this her nobility.  Lastly behold if you will the little bodies which we call the animals.  What smaller than these is able to be imagined in comparison to the universe?  But there now behold feeling, and voluntary motions—an infinite architecture of bodies.  Behold if you will, among those, these fine bits of dust, which are called Men; to whom the Creator has granted such, that in a certain way they may beget themselves, clothe themselves, arm themselves, teach themselves an infinity of arts, and daily accomplish the good; in whom is the image of God; who are, in a certain way, lords of the whole bulk.  And what is it to us, that the body of the universe has for itself a great breadth, while the soul lacks for one?  We may learn well therefore the pleasure of the Creator, who is author both of the roughness of the large masses, and of the perfection of the smalls.  Yet he glories not in bulk, but ennobles those that he has wished to be small.

In the end, through these intervals from Earth to the Sun, from Sun to Saturn, from Saturn to the fixed stars, we may learn gradually to ascend toward recognizing the immensity of divine power.

Anyone who could observe the stars, and do basic math, had to agree with Kepler that the stars were giant and dim in a Copernican universe, and the sun and its planets were unique bodies.  A universe of sun-like stars, on the other hand, was the invention of those who didn’t do science carefully enough.  Kepler said that such a universe was the invention of crazy philosophers, who broke out of their asylum and went running around exulting in the immensity they have imagined—crazies like Bruno.  Kepler names Bruno, and uses the giant stars to thoroughly demolish Bruno’s ideas about a universe of other suns.

Of course today Bruno looks like he knew something, because today we understand that stars are not all giant and dim.  They are, more or less, suns.  In fact, as best we can tell, most stars are actually smaller than the sun (as we saw in my post from two weeks ago), but some are much larger.

The flaw in Kepler’s argument was that the apparent sizes of stars, whether measured via the naked eye or via an early telescope, were false.  Those apparent sizes were an artefact of optics and of the wave nature of light.  That artefact, called diffraction, made the stars look far larger than they were.  But no one knew about light waves and diffraction in Bruno’s and Kepler’s time.  Decades would pass before astronomers would begin to obtain evidence suggesting that apparent star sizes were false.

In the mean time, opponents of the Copernican theory argued that the giant stars business was absurd.  Consider Kepler’s estimate of Sirius being larger than the orbit of Saturn.  In the Earth-centered view, the orbit of Saturn was almost to the edge of the universe—so one single star in the Copernican theory was as large as an entire universe in the Earth-centered theory.  Copernicus’s opponents also thought the tendency of Copernicans to invoke divine power in regards to the giant stars (as Kepler did above, and as others did in more dramatic fashion) was equally absurd.  It just made more sense for the Earth to be immobile at the center of the universe, so there would be no parallax issue.  The stars then did not have to be so far away, and did not have to be so large.  They could be about the same size as the larger planets.  The Earth-centered system created by Tycho Brahe, the astronomer who employed Kepler for a while, had planets orbiting the sun while the sun orbited the Earth.  Brahe’s Earth-centered system was fully compatible with telescopic discoveries that showed Venus or Jupiter to orbit the sun.

Thus in the Copernican Revolution there was no modern scientific view of the universe displacing the old Earth-centered view.  The argument in the early seventeenth century was the Earth-centered universe of Brahe on one hand, vs. the sun-centered giant-stars universe of Kepler on the other.  Those two options were what observations and calculations allowed.  They were the options that science supported.  They were also both wrong, in that they both differed wildly from our modern view that says the stars are other suns.

So what does this wrongness mean for how we view the Copernican Revolution?  Does it matter that Bruno’s seemingly modern view was clearly false to anyone at the time who could look up and apply geometry?  Is Bruno still a martyr to science if the idea for which he was killed was contrary to the then-available scientific evidence?  Or is he just another guy among many who were brutally executed for reasons that would not merit execution today?  At any rate, it would seem that the Copernican Revolution was not about the modern scientific view of the universe displacing the old Earth-centered view.  Scientific support for the modern view came much later.

This sketch of London in the early seventeenth century illustrates the common nature of execution at that time.  Note the near end of the bridge. 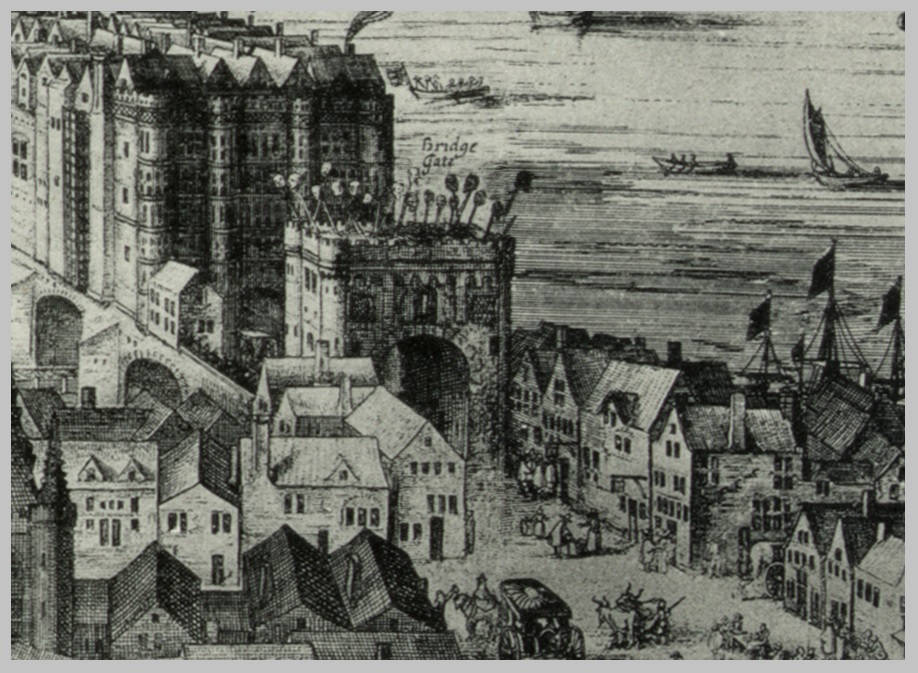 A close-up of the near end of London bridge, showing the many heads of those who had been executed, mounted on pikes for all to see as they went about their daily business with their families.

If you are asking yourself why you never heard any of this before, well, that is because this post is the product of recent research.  If you want the full story, check out “The Starry Universe of Johannes Kepler” (click here for it), by yours truly, published this year in the Journal for the History of Astronomy.  You will need access to the journal through your library.  However, if you subscribe to this blog, you can contact me directly (contact information only appears for readers who are paid-up members of Sacred Space, and logged in as such) via e-mail at christopher.graney@vaticanobservatory.org with the subject line “JHA Off-Print”, and I can send you an “off-print” of the paper.  Also, an early version of the paper (not peer-reviewed) is freely available via the Cornell University ArXiv pre-print server—click here for it.