For years I have been meaning to read Bernard de Fontenelle’s Conversations on the Plurality of Worlds. In this book, published in 1686 as Entretiens sur la pluralité des mondes, an intelligent countess, who knows little about astronomy, converses with the narrator, a male philosopher, during a series of evening strolls through the gardens of her estate. The narrator explains what’s known to seventeenth-century astronomy, and the countess joins him in speculating about possible inhabitants of worlds beyond the Earth.

Rather than using the Latin scholars would read, De Fontenelle wrote his story in vernacular French to reach a wide audience. He must have thought that all kinds of readers would like to know about the “plurality of worlds.” It’s a charming and clever book, and I’m kicking myself for not having read it earlier.

The Philosopher and the Countess wander through her garden, contemplating the worlds of the night sky.

Within the explanation of Copernicus’s cosmology—the Earth is rotating, not fixed—I found a modern-seeming passage about the atmosphere. The Countess wonders what happens to air, if the Earth’s surface is constantly moving. She asks:

But I have a Difficulty to solve, and you must be serious. As the Earth moves, the Air changes every Moment, so we breathe the Air of another country.

Not at all, replied I; for the Air which encompasses the Earth, does not extend above a certain Height, perhaps twenty Leagues; it follows us and turns with us: have you not seen the labours of the Silk-Worm, the Shells which those little Insects imprison themselves in, and weave with so much Art and Closeness; but yet their Covering is of a Down very loose and soft: So the Earth which is solid, is covered from the Surface twenty Leagues upwards with a kind of Down, which is the air, and like the Shell of the Silk-Worm turns at the same Time. Beyond the Air is the Celestial Matter, incomparably more pure and subtle, and much more agitated than the Air. 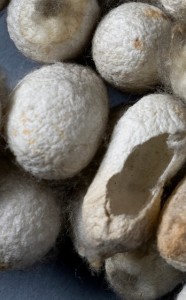 A “league” in France was roughly four kilometers, so our philosopher is describing a layer of air about 80 kilometers, or 50 miles. Indeed, we know today that all but a trace of Earth’s air lies below this height. 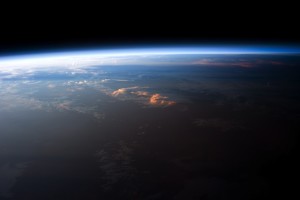 The thin silkworm-shell seems an apt analogy to the atmosphere astronauts see from their orbit at the edge of their horizon. It’s nice to know that de Fontenelle and his peers had it pictured pretty well, even back in 1686.

Conversations on the Plurality of Worlds is available from the Internet Archive and from Google Books in English translations.  Note: The software used by these archives to convert page images to text has a hard time with books from the 17th and 18th century.  Printing techniques were a bit wobbly, and the long “S” that looks like a lowercase “f” was in common use.  So automatically-generated text has a lot of errors in it.  If you download EPUB or “plain text” versions of de Fontenelle’s book, it may be a bit of a puzzle to read!