A simple non-respresntational art piece I did a couple years back entitled, “Sacred Sky.” At the beginning, it was paint on canvas. By the end, I felt it expressed my feelings about the night sky and the day sky.

When I began to study the art of composing music, our professor shared that musical works which survived the test of time usually focus upon one of three things: love, nature, or God.  Whether the composer wrote on these subjects for personal reasons or on commission for someone else, there is a characteristic of both the music and the message that resonates so deeply within our human nature that they have been given the designation “classics.”  These classics remind us that the human person yearns to express, through beautiful forms, our inner desire for love, to be connected to the natural world, and to be connected with the Divine.

As a simple test of this theory, let’s say that you just started a new job.  When you are taken to your office or cubical, you immediately notice that there are no windows, no pictures, and nothing warm or living in your new beige box.  After about a week of orientation and experiencing a couple “nutty” moments while looking at work binders and beige dividers, you decide to “liven up” your work space.  Let me ask, what do you choose to personalize your office?  It wouldn’t surprise me if you would put up pictures of your family (people you love), a potted plant or painting of the outdoors (nature), or perhaps some religious symbols or inspirational quotes (your faith).  This may not be the best example, but I present this to show that even the things we surround ourselves with often point to love, nature, and God.

Another aspect to this connection with love, nature, and God is that the human heart not only desires to gaze upon these things from the outside in, but also wants to experience them from the the inside out.  What I mean is that we not only want to hear songs about love, but we want to be loved.  We not only want to look at a beautiful painting of nature, but we want to be a part of nature.  And we not only want to read about God, but we want to be in contact with God to help our lives find purpose and meaning.  This two-fold desire is the foundation of participation in the theological sense: As we participate in the natural world we live in and as we participate in authentic expressions of love with one another (in all of its manifestations), we are drawn into participation in the very life of God, seeking to be fully alive in Christ.

This theology and spirituality of participation breeds within the human heart a desire to create and co-create.  When a young married couple shares their gift of sexuality, it is not only an act of love with one another, but also expresses their desire to co-create, to bring life into the world, intuitively affirming the beautiful sentiment from the Catholicism the Catholic Church that children are the “crowning glory” of marriage. (CCC 1652) When an artist wishes to express on canvas the inner reality of a scene from nature, they do so, in part, to allow their creativity to become a part of creation.  And just as a skilled artist has a discernible style of expression that becomes self-evident to the beholder, so, too, do we find the fingerprints of God upon creation, one of which being the desire to create in imitation of the Source of creation.  Put another way, the Creator creates so that creation, in turn, can participate in the very life of God as co-creators.  Clear as mud?!

This principle we are exploring can be a bit abstract, but it affirms that the human experience is not merely one of survival.  Rather, we have within ourselves the desire for meaning and purpose, questions that are not measurable with tools made by human hands.  Where does this desire come from?  Does this not point to a spiritual faculty of human existence that is unique in creation?  And isn’t this desire to be creator and co-creator so strong that to deny this inclination is to deny a fundamental part of who we are?  Some of the most horrific moments of human history, such as the Holocaust, have as a central sin the dehumanization of the person, forcefully denying their dignity as a child of God, that treats them as nothing more than a virus that needs to be eradicated or as wild animals that need to be caged and exterminated.  These acts of horror remind us that when we lose the transcendent quality of life, we enter a “post-human” age in which life is defined by usefulness and productivity in contrast to being an expression of God’s love in the world whose very existence invites them to participate in creation, whatever their ability or inability may be.

Perhaps you disagree with this reflection, arguing that Christianity actually limits authentic creativity as part of the human experience.  Some may argue that it is only when one breaks the shackles of Christian influence that creativity is sincere, divorcing one’s self from Catholicism’s fixed pallet of symbols and meaning.  A central problem with this protest is that it ignores authentic Christian anthropology.  The protest presumes a “deductive” process of forcing a view of self upon the individual from outside.  The Christian understanding of human nature is “inductive,” meaning God has placed within our being a longing for truth, goodness, and beauty, rooted in being made in God’s image and likeness, though marred by sin.  Therefore, the Christian life is not one of imposing a view of self from the outside, but rather to allow the true self to emerge that is from within.  At the core of this struggle, however, is the humility to explore the depths of this inner self, both its beauty and its brokenness, so that, healed by God’s grace, the true self becomes more self-evident.  It is this lack of humility among Christians that can lead some to argue that the Church seeks to stifle the soul, not letting the true self to be revealed. However, it is not the Church that stifles the creativity of the person, but, rather, it is the person who stifles themselves when they refuse the humble exploration of who they are in God’s eyes, despite the darkness they may encounter. 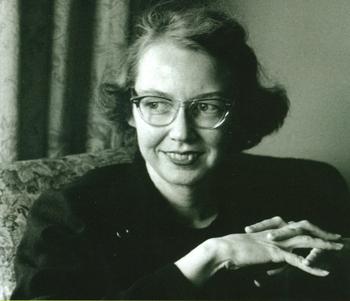 Flannery O’Connor 1925-1964 Click Here to read her short essay on the relationship between the fiction writer and Catholic Dogma.

A way to understand this process from the standpoint of literature can be found in the work of Flannery O’Connor. In an essay she wrote for America Magazine on the relationship between fiction writers and Catholic Dogma, Flannery argues that removing faith from the world view of a novel is not creation by addition, but rather creation by subtraction.  The novelist who presumes that a work can only be authentic if it excludes faith only limits the work by excluding an essential aspect of human existence.  On the other hand, Flannery also argues that when the faith of someone is weak, it is then they will recoil at the idea of writing a fictional novel that presents an honest, raw depiction of reality.  Therefore, it is important to note that Flannery is not making an argument for the writing of a tidied up, pristine book, ignoring the struggles of fallen human nature.  Rather, the Catholic author should embrace writing on the honest, hard reality of human experience, which includes the movements of God’s grace.  To omit this grace is to omit a key dimension of human existence.

In conclusion, whether we are gazing at the stars of the night sky, walking through the halls of an art gallery, enjoying the harmonies of a great symphony, or reading a novel about the struggles of life, they all point to a core desire to find love, to be connected with nature, and to experience both through the love of God.  Take some time this week and pray for the people you love, spend some time admiring God’s creation, and allow your heart a moment of quiet contemplation in God’s presence.  In those moments, do not be surprised if you experience a stirring to add your own creativity to this vast creation in which we live.  And when that moment comes, realize that you have discovered one of the clear traits left within the human soul by God: To be co-creators in imitation of the Creator.