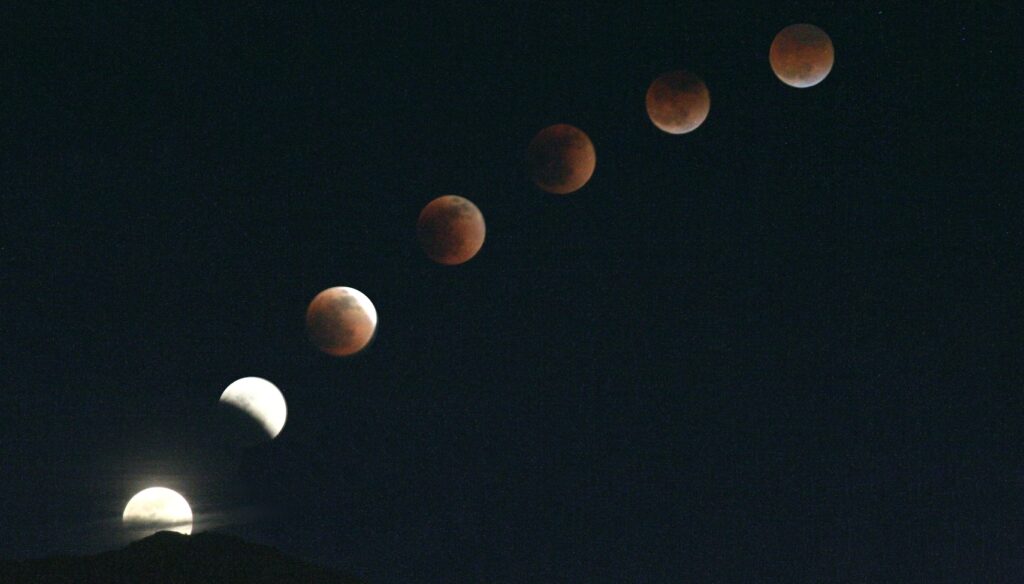 The long awaited event took place as the moon rose on the night of Sunday, May 15. We had gathered in the parking lot of a local church that had a clear view of the Rincon Mountains east of Tucson. The forecast was for scattered clouds which didn’t frighten me as they could add some character to the photos and I wasn’t trying to ‘do science’ anyway. But it turned out to be only a minor consideration as can be seen in the final image. The eclipse was already underway as the moon rose over the mountains. This image is a compressed montage that covers over 3 hours of the eclipse. As the moon entered the umbra, or the darker portion of the Earth’s shadow the red color was evident and from then on it very slowly got darker and darker. One woman with our group remarked “it was like watching grass grow!”. At mid eclipse it was seen as the darkest eclipse we had all seen with only a little red on one edge. It was at least as dark if not darker than the eclipse in Dec. 1964 which I had seen as a boy from my home in Michigan, and vividly remembered. Astronomers use a five step scale (0-4) called the Danjon scale to measure the darkness and redness of lunar eclipses. Danjon 4 is a bright eclipse where the moon is like a bright orange marble at central eclipse. Danjon 0 is nearly invisible and colorless. This one was probably around Danjon 1, easily the darkest eclipse of my life.