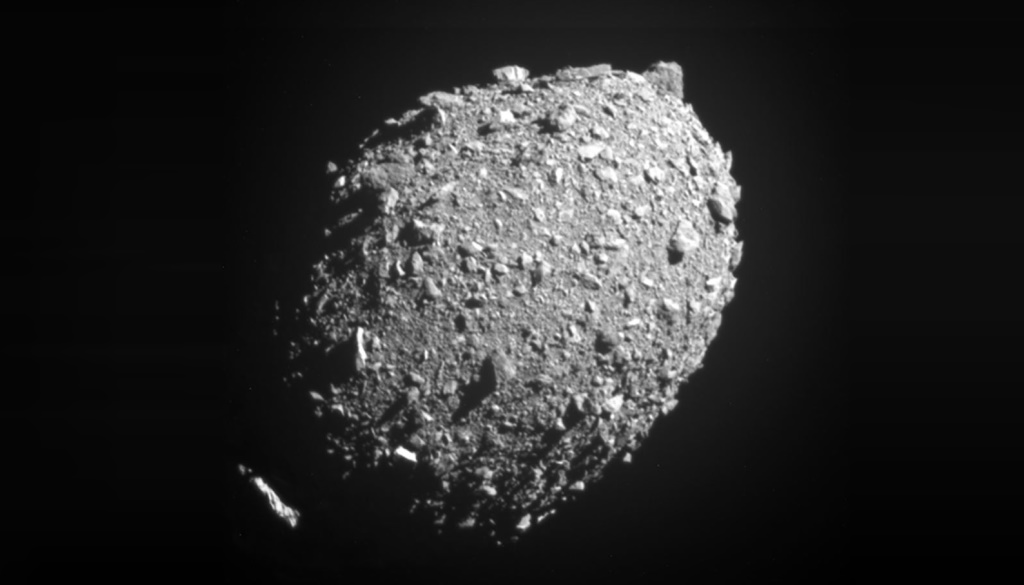 The DART spacecraft impacted the asteroid Dimorphos – a moonlet of the asteroid Didymos, in the first test of a method to deflect hazardous asteroids.

Event attendees at several venues watched with growing excitement as the surfaces of both Didymos and Dimorphos resolved into a rocky rubble-piles in the seconds before impact. Everyone went absolutely wild as the final loss-of-signal image was displayed.

The head-on impact of the 500 kg (1,100 lb) DART spacecraft at 6.6 km/s (4.1 mi/s) likely produced an energy equivalent of about three tonnes of TNT and an estimated velocity reduction of Dimorphos between 1.75 cm/s and 2.54 cm/s depending on numerous factors such as material porosity.

The next morning, I saw an animation from a ground-based telescope tracking the pair of asteroids, with a plume expanding out from it after impact.

Shortly after that, preliminary preview images from the LICIACube spacecraft started popping up all over social media showing an expanding cloud of debris.

Asteroid Dimorphos will now be observed using ground-based telescopes to confirm that the asteroid’s orbit around Didymos has been altered by the impact – the mission’s goal is the shorten Dimorphos’ orbit by roughly 10 minutes. I’ve seen a couple posts voicing concern about the amount of material that was ejected, and questioning that the mission’s goal might not be met – but if that is the case, that information itself will be vital in designing future missions to deflect rubble-pile asteroids.

A lot of people went wild because we smacked a spacecraft into an asteroid – which was no small feat! Others, like myself, leaned back in our chairs and breathed a heavy sigh of relief. Finally, all these decades after Carl Sagan made me aware of the threat of asteroid impacts, we’ve taken our first baby-steps toward developing the tools to deflect asteroids.

I’m absolutely thrilled by the DART mission, but so much more needs to be done for planetary defense. There are several other methods of asteroid deflection that need to be tested – some might be more effective against rubble-pile type asteroids. We also seriously need to increase the rate of asteroid discovery and tracking!

Cover Image: The last complete image of asteroid moonlet Dimorphos, taken by the DRACO imager on NASA’s DART mission from ~7 miles (12 kilometers) from the asteroid and 2 seconds before impact. The image shows a patch of the asteroid that is 100 feet (31 meters) across. Credit: NASA/Johns Hopkins APL