Fr. James, did the star of Bethlehem really exist? This is one of the most common questions I get as a priest who also loves to gaze into the heavens. There was a time I would try to explain the multiple theories of what the star might have been. Christopher Graney posted a wonderful reflection on some of these ideas just a couple of days ago. Br. Guy has also put together a wonderful video on The Star Bethlehem. I am so happy that these two brilliant minds, along with others I have read and seen, have put together these reflections to share with you. One of the reasons I’m so happy is because I feel less inclined to delve homiletically into questions of star conjunctions, supernovae, and noonday phenomena at this point of my priesthood. Instead, I find it more fruitful to ask a different kind of question: What did the Magi seek? Stated another way, What did the Magi find?

On the surface, the answer to this question (or questions) seems rather simple: They were looking for Jesus. Yet, a powerful lesson I have learned from faith and science is that it is one thing to encounter or “find” something, but another thing to understand that encounter to its depths.

For example, I sometimes encounter well-educated parishioners who presume Jesus was a zealot in light of a popular book that embraces this thesis. The question often is stated, “Father, how can we, as Catholics, square an ethic of peace and non-violence with a Savior who was a political revolutionary?” I would agree that Jesus is revolutionary, but my retort usually begs the question, “How can an author claiming Jesus to be zealot square this thesis with Jesus’ call to love our enemies and do good to those who hate us?”

When reading Scripture, it becomes clear that Jesus’ innermost circle did not understand his mission and his person until after the resurrection. Some thought he was a teacher. Some thought he was a prophet. And, dare I say, there were some that wanted Jesus to be a zealot who would establish a “New Jerusalem” through military conquest. These misunderstanding of Jesus come to a head when he asks his own followers, “Who do people say that I am?” Even when Peter gets the answer “right” by saying, you are Christ, the Son of the living God, his insight is quickly met with chastisement when he tries to tell Jesus that Messiahs shouldn’t suffer and die. This reminds me of another lesson I’ve learned from faith and science: Even when you get it right, you probably got it wrong.

Returning to our stargazing Magi, what were they looking for? An insight into this question comes by way of the gifts they bear of gold, frankincense, and myrrh. Gold was the customary gift to present to a king. Therefore, it becomes clear that the Magi were looking for a newborn king.

At first, the gift of kingly gold may seem to support the thesis that Jesus was a militaristic zealot. However, when we add frankincense to the gift registry, things start to take on a different shape. Frankincense was the gift that was customary to give to a priest. In light of this, the Magi were not just looking for a king, but a king who also was to have a priestly ministry. 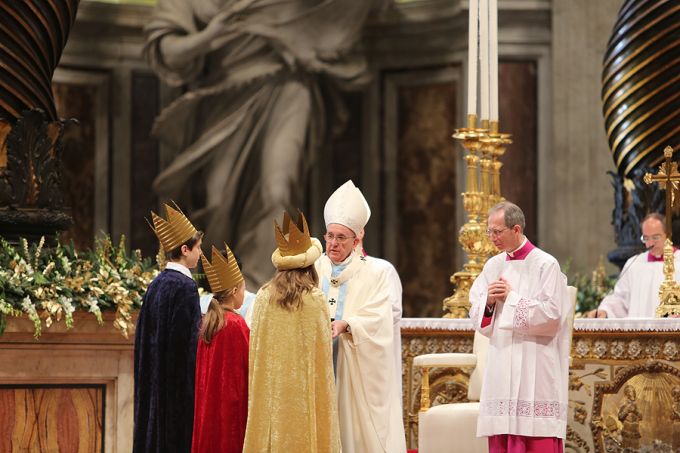 Still, these gifts don’t give us the full picture of Jesus. I could easily think of a priest-king who would justify military violence through divine interdict. That is where the gift my myrrh comes in. Myrrh was used in the ancient world as a preservative and fumigant for a body after death. If we were to recast the three gifts in modern terms, Jesus would have received gold, frankincense, and embalming fluid. I don’t know about you, but if a complete stranger would give a child of mine embalming fluid as a gift, I would be suspicious of these Magi to say the least!

What was the symbolism of myrrh? When read with the gifts of gold and frankincense, it points to a prophetic promise from Isaiah of a priest-king who would suffer vicariously on behalf of the people, making of himself the sacrifice for the forgiveness of our sins. He would be gentle and quiet like a lamb led to the slaughter. We would experience healing through the suffering he endured. I could go on, but the conclusion would still be the same: These eastern stargazing Magi who were not of the tradition that was looking for Jesus got it right!

This reflection points to yet another lesson from faith and science: Though our faith firmly embraces that all things came from the same Creator, the way we come to know the Creator can be achieved in various ways. Some may find this statement suspicious, wishing to remind me that Jesus is the sheep-gate, the only pathway to salvation. I would agree with this statement. Yet, we also need to remember that Jesus identifies himself as the Way, the Truth, and the Life. Therefore, any sincere investigation into truth is ultimately an exploration of the source of truth. Any time we step outside of the darkness of our ignorance and sin, seeking a moment of illumination through studying the natural world or the supernatural world, we are seeking him who is the light guiding our journey: Even if that light is too intense at first and causes us to spiritually squint in our ignorance. Yet, in time, our spiritual eyes adjust, allowing us to slowly see him who is our source and summit, our Alpha and Omega, and him who is the destination of our journey. Let’s face it – We’re all Magi!

Spiritual Exercise: What do you seek in your life? What is the light that guides you through the darkness of our world? Do you presume to know the full extent of the light you seek or are you willing to humble your heart, presume ignorance, and allow this light to penetrate your innermost being? Pray that your quest toward truth be met with the source of truth. May you find not only the historical infant Christ, but him who is priest, prophet, and king, establishing a Kingdom of love, peace, and nonviolence.