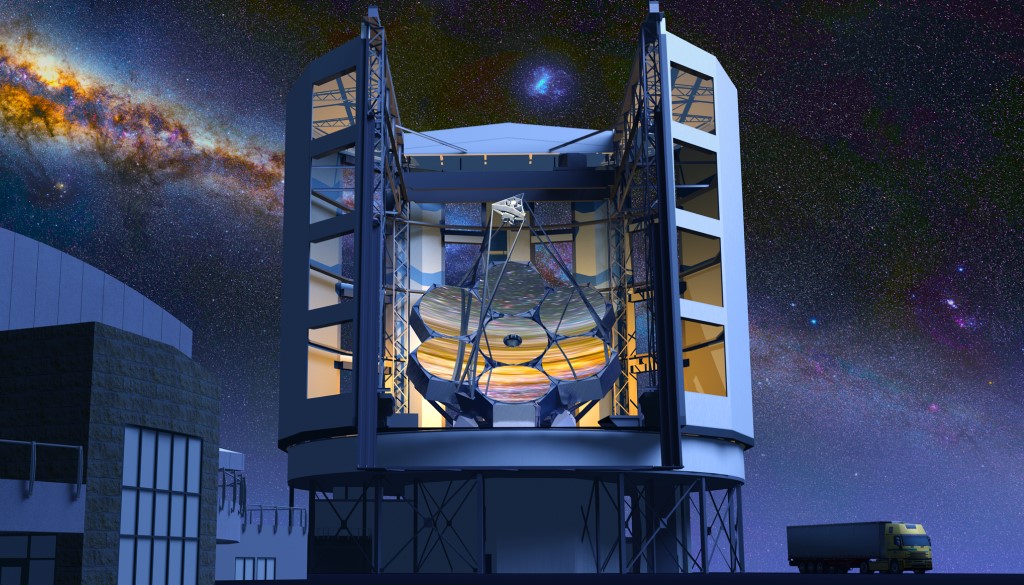 I have seen the future.  It is big.

The future is the Giant Magellan Telescope (GMT).  This telescope is being built in Chile, and its mirrors are being made at the Caris Mirror Lab (really a mirror factory) at the University of Arizona.  When complete, the GMT will be the largest telescope in the world, with seven mirrors acting as a single 24.5-meter (965-inch) telescope.

I have seen those mirrors under construction.

I saw them during the Vatican Observatory ACME conference (Astronomy for Catholics in Ministry and Education) that was held in Arizona January 10-14.  One of the several ACME “field trips” was a tour of the Caris Lab, where right now they are making the GMT’s mirrors.  We saw two mirrors-in-progress.  It was pretty cool to be able to see, and photograph (see below), the construction of this enormous telescope, which will be, in a sense, the “granddaughter” of the Vatican Advanced Technology Telescope (VATT)—which highlights just what a radical, groundbreaking instrument the VATT is.

The Caris Lab was founded by Roger Angel, a professor at the University of Arizona.  He began to experiment with making lightweight glass telescope mirrors using an oven he built in his own back yard.  His idea was to make hollow-ish mirrors by filling a mold with heat-resistant ceramic cores that the glass would melt around, and to have the oven steadily rotate so that the mirror took on a naturally curved shape as the glass melted.

The idea worked.  The mirror lab was set up.  And the first mirror to be built using this technique and put into an observatory was the 1.8-meter (71-inch) mirror for the VATT, cast in 1985 (at the time the mirror lab was housed in a building that had formerly been a synagogue, so there is this joke about the Vatican’s mirror being made by an Angel in a synagogue…).

After the VATT the Caris Lab made mirrors in the 1.2-meter to 3.5-meter range from 1987 to 1989.  Those we might think of as “younger sisters” of the VATT.  Then in the 1990s, the Lab started making mirrors for larger telescopes: 6.5-meter and 8.4-meter mirrors, including the mirrors for the Large Binocular Telescope (which is on Mt. Graham next door to the VATT) and the Vera Rubin (Large Synoptic Survey) Telescope.  These might be thought of as “daughters” of the VATT.  And starting in 2005, the Caris Lab started work on the Giant Magellan Telescope—another step forward, and thus the “granddaughter” of the VATT.

The VATT mirror is one of the more radical mirrors made by the Caris Lab.  Its focal ratio is 1.0, meaning that its focal length is equal to its diameter.  The other Caris Lab telescopes have ranged from 1.14 to 1.9.  A typical 6-inch reflector, by contrast, will have a focal ratio of 8.0.  The diagram below shows how light would travel through the VATT (left) versus a telescope with an 8.0 focal ratio (right).  The low focal ratios mean that the telescopes made with the Caris Lab mirrors are very compact.  The buildings that house them can be compact, too, which helps with cost.

The VATT is not a new telescope anymore.  It was never particularly huge.  But it was and is a groundbreaking instrument.  It was, and in a sense still is, the future.