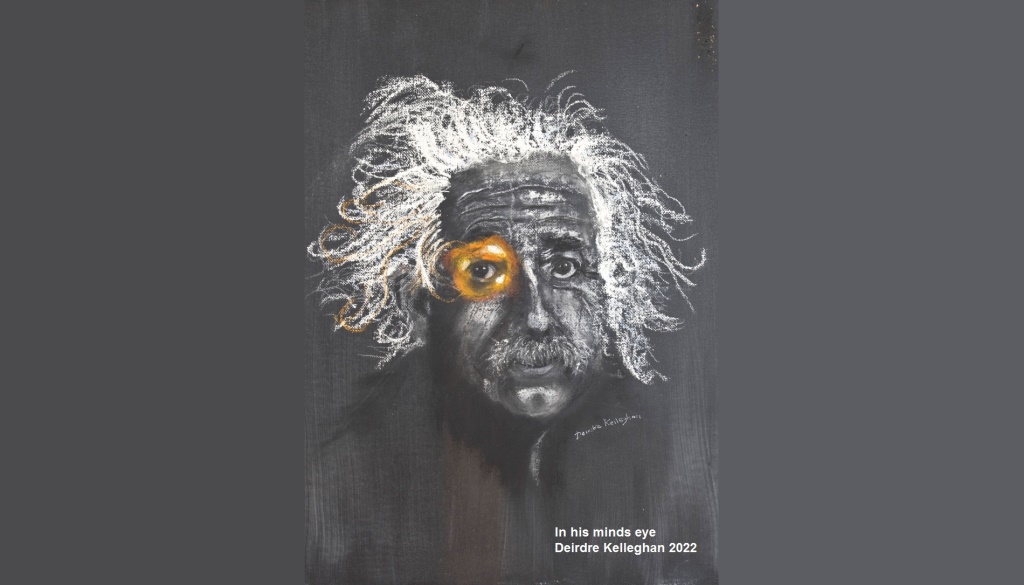 The idea for this drawing of Einstein came to me shortly after the Event Horizon (EHT)Telescope image of Sagittarius A* was published. I loved the image for several reasons. One is the collaboration of the EHT group, which is admirable in both a scientific and human way. One of the many examples of cooperation among this community on this increasingly fragile planet. The other is that it proved Einstein’s prediction about black holes from his theory of general relativity.

From what I have read about Einstein, he seemed to be a positive person, a deep thinker, and a caring individual. He has an interesting face, and who doesn’t love that wild hair? The drawing is from a photograph taken of him circa 1939. His eyes are deep set, surrounded by wrinkles of time.

Over a few weeks I conducted several experiments to place Saggitarius within his eye socket area. For some tests, I used pastel grated into hundreds of dots. These are difficult to control, so I drew Sag A* directly around his eye. I was merging the action as much as possible into the contours of his face. One test involved leaving the centre space black, just like the EHT image. However, that looked rather scary. I could not have Einstine looking like an eyeless victim in Stranger Things.

His eye looking through the black hole was a more robust effort in my mind. I intended to keep this drawing simple but effective and not go too mad with enhancements. Letting some of the colour trail into his hair was a little artistic license on my part.

Links to more reading on this subject

Inverse – The Supermassive Black Hole at the centre of our Galaxy