Click here or on the image for a student-oriented video tour of the Leviathan.

This past March, on the way to join the Vatican Observatory’s tour of astronomical sites in Italy, my wife and I visited Birr (Parsonstown) in Ireland.  Birr is home to Birr Castle and its great telescope, the “Leviathan of Parsonstown”—the giant mirror-based “reflector” built by William Parsons, the Earl of Rosse.  The Leviathan was the largest telescope in the world for over seventy years, from its completion in 1845 until 1917.  It was arguably the first modern telescope—the first successful effort to produce a big “Light Bucket” reflecting telescope* that could tease out details about what are today often called “deep sky objects”—the “faint fuzzies” that are galaxies and nebulae and the like.  The Leviathan was bigger than any lens-based “refractor” telescope existing at that time, and bigger than any refractor that ever would be built.  It had (and still has) a mirror of diameter 72 inches, or 6 feet, or 1.8 meters (the Vatican Advanced Technology Telescope on Mt. Graham in Arizona has the same size mirror).  Astronomers have been following the model of the Leviathan—building reflectors, and building them big—ever since.

The Leviathan was the future of astronomy.  It even inspired poetry from Sir William Rowan Hamilton (those who have studied physics in some depth will recall the Hamiltonian that carries his name):

I stood expecting, in the Gallery
On which shine down the Heaven’s unnumbered eyes
Poised in mid air by art and labour wise,
When with mind’s toil mechanic skill did vie,
And wealth free poured, to build that structure high,
Castle of Science, when a Rosse might raise
(His enterprise achieved of many days)
To clustering worlds aloft the Tube’s bright Eye.
Pursuing still its old Homeric march,
Northward beneath the Pole slow wheeled the Bear;
Rose over head the great Galactic Arch;
Eastward the Pleiads with their tangled hair;
Gleamed to the west, far seen Lake below;
And through the tree was heard the River’s flow. 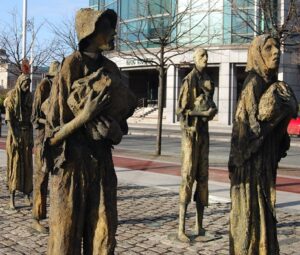 Like Hamilton, my fellow blogger Deirdre Kelleghan is of Ireland, and this summer she wrote a post for The Catholic Astronomer entitled “Astronomical Irish Women” about Agnes Mary Clerke.  Deirdre wrote:

Her family were reputed to have started soup kitchens to help feed the starving people in their locality.  Ireland was plagued by a famine between 1845 – 1852.  This episode in Irish history tore our population to shreds leaving it even today massively reduced and affected for generations.

Some will say no.  The argument that the money spent on outer space should instead be spent for needs of education and food and medicine here on Earth has been voiced often.  Recently, when India was launching its Mangalyaan Mars orbiter, the PBS NewsHour asked:

India’s Mars Orbiter Mission is a point of great national pride. It will be completed for just over $70 million, a tiny fraction of the cost spent by NASA on similar programs. But is spending any resources on a mission to Mars wise when hundreds of millions of Indians struggle to meet basic needs?

NewsHour interviewed Brinda Adige, who runs an NGO called Global Concerns India, focused on women and children in a slum in Bangalore, a few miles from the headquarters of the Indian space agency.  Adige said she was sad when she first heard about the Mars mission:

…so much of money that is being spent to send a rocket out into outer space, when we know that here on Earth, in my country there are children, dying every day because they have no food to eat. So many of them, spending their days and nights without electricity. No roads, no education no protection for women and the girl child anywhere in this country.

With this argument in mind, let us suppose that the Leviathan had never been built.  It was a breakthrough instrument, both in terms of its technology and in terms of what it revealed about those objects we now call spiral galaxies.  It is difficult to guess what the absence of that breakthrough would mean for what we know today.  Had the Leviathan never been built, what would we not know now?  Had it never been built, what would we now not be able to do?  What if, somehow, the Leviathan was key to certain important pieces of knowledge that make our modern world possible?  Would we be willing to give up knowledge that we have today, technology that we use today, so that the money and effort that went into the Leviathan could have instead gone into famine prevention and relief in Ireland? 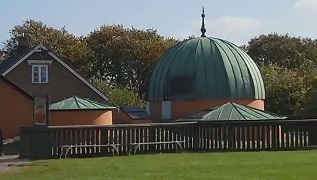 Click here or on the image for a student-oriented video tour of Tycho Brahe’s observatory.

I often wonder why we do not demand an accurate history of science.  For example, the history of the American west as portrayed through old Hollywood Western movies, with its good guys and bad guys, would never be accepted as valid in educated circles today.  Yet just that sort of movie history is common wisdom when the history in question is that of science.  I think there are a number of reasons why this might be, but I speculate that one of them is this: old-movie history was history for an audience who benefited from the events of history, and we are all beneficiaries of the events of science’s history.  Parsons built, and Hamilton sang the praises of, the Leviathan during a time of famine.  And the Leviathan is not the lone example of this sort of thing—for example, Tycho Brahe built his great observatory on an island given to him at the expense of its residents (and then those islanders had to give him their labor as well!).  Few of us live lives removed from the fruits of science.  We are all like Hamilton: the beneficiaries of the art and labor wise, mind’s toil and mechanics skill, and wealth free poured, that built that structure high, the Castle of Science that was and is the Leviathan.

*William Herschel built a large reflecting telescope fifty years earlier, but it was not very successful as a telescope.