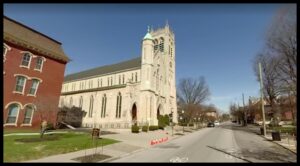 A friend of mine, Justin Elliott, is the sort of person who thinks to look for them. He and his family regularly attend either the 9:00 AM or 10:30 AM Mass at St. Louis Bertrand Church in my hometown of Louisville. Perhaps because Justin grew up attending a “megachurch” that is relatively plain compared to St. Louis Bertrand, or perhaps because he has read too many mystery books to his own children, or perhaps because he watched too many movies of the “Indiana Jones” or “DaVinci Code” genres, Justin has a fascination with the ornate interior of the church, and how the light shining through the stained glass windows plays across all the various features within the interior. 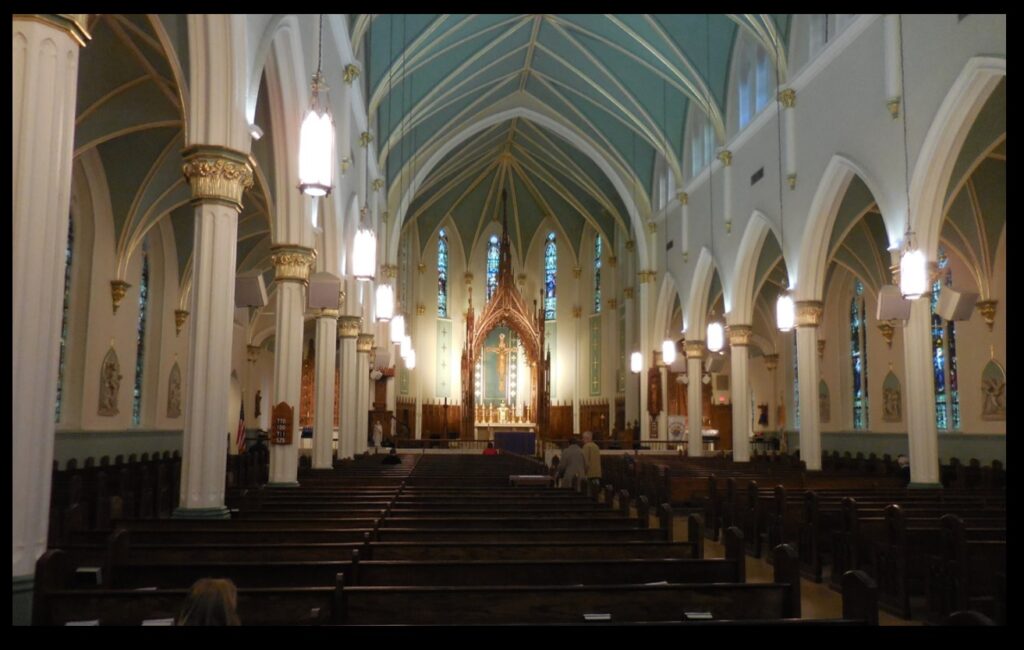 The interior of St. Louis Bertrand Church. Note the large baldachino over the altar.

This past winter Justin and I got into a discussion about the light from one particular window: a round window located in the center of the front wall of the church; a window that bears the word “Veritas”—“Truth”. Would the light shining through “Truth” ever beam down upon key interior features—upon the tabernacle? upon the crucifix? upon the center of the main aisle?—all in true Hollywood style, so that at that key “Moment of Truth” the hero or heroine would be able to “decipher the clue” and “solve the riddle”. 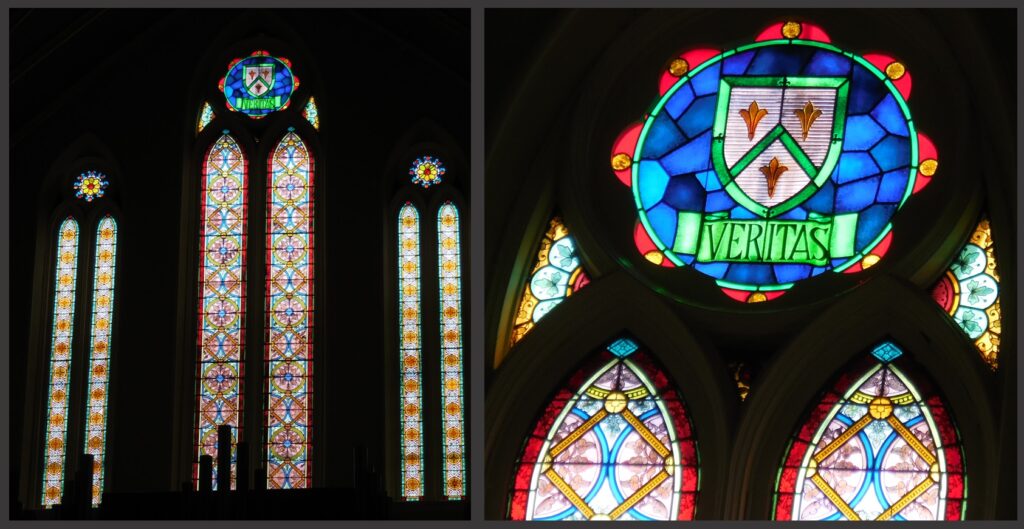 Deep in winter, when this discussion began, the Light of Truth was illuminating nothing but a relatively bare wall of the nave of St. Louis Bertrand. However, the position of the sun changes over the course of a year. If we knew where the sun needed to be for the Light of Truth to hit various interior features of the church, and we had some measurements of the church, we could make some predictions about where the Light of Truth might land, and when. Thanks to modern technology, the measurements and calculations needed to determine all this are much less tedious than they would have been “back in the day”. Indeed, we were able to sit down and rough out the calculations in an evening in Justin’s living room, with Justin’s children milling about, no doubt marveling at the level of nerd-dom on display, with laptops running Google maps and the Stellarium planetarium app, and papers with scribbled calculations and diagrams scattered all about the coffee table.

For the Light of Truth to beam right down the center of the nave of the church and strike the tabernacle, the crucifix, or the center of the main aisle, the azimuth angle of the sun (that is, its position along the horizon) would have to be such that the sun was shining directly onto the front of the church building. St. Louis Bertrand faces East, mostly—we found that it actually faces about eight degrees South of East, because Louisville’s grid of streets is not exactly oriented with the cardinal NSEW directions.

St. Louis Bertrand Church is oriented so that it faces about 8° S of E.

Thus we had to look for when the sun would have an azimuth of eight degrees South of East and be above the horizon. That would not occur until early March. Then we had to figure out the vertical or altitude angle needed for the sun to shine in onto a notable feature within the church—the baldachino, for example, one of the higher large interior features, and thus one of the first things that would be illuminated by the Light of Truth. To do this we had to estimate the height of the ‘Veritas’ window above the floor of the church, and the height of the baldachino, and do a little trigonometry to work out the required solar altitude angle. 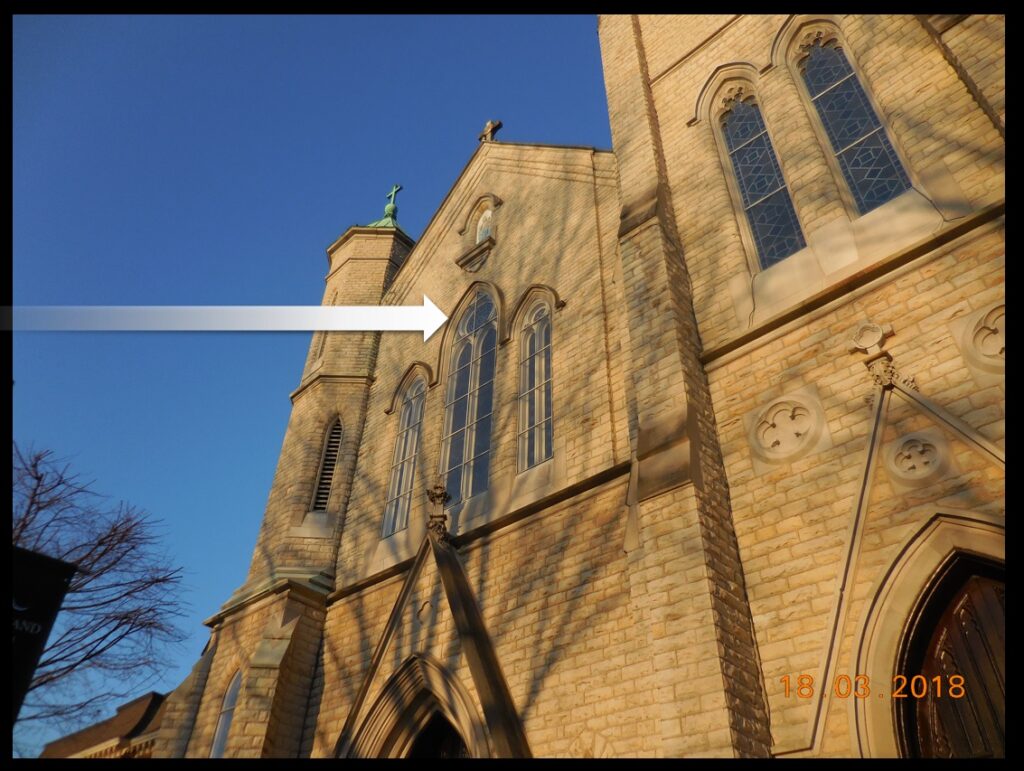 The ‘Veritas’ window, seen from outside.

Did the calculations work? They certainly did. The Light of Truth was cast exactly as expected, at exactly the times calculated. Shown here are photos taken on Sunday, March 18, one of the earliest dates in 2018 when the sun first achieved the vertical altitude and the eight degree South of East azimuth needed to start illuminating the top of the baldachino; and on Sunday, June 17, near the summer solstice. The sun shining through the ‘Veritas’ window cast a blue-green circle of light that was plainly visible to those looking for it.

The ‘Light of Truth’ (blue-green circle of light, cast by the ‘Veritas’ winow) illuminating the top of the baldachino, on March 18, at about quarter of 9 AM.  Click the image to enlarge.

The ‘Light of Truth’ illuminating the aisle near the back of church, on June 17. This sequence of photos shows the blue-green circle moving across the aisle in the minutes prior to 10:30 AM. The light actually reached the center of the aisle for the ‘Moment of Truth’ at just about 10:30 AM.    Click the image to enlarge. 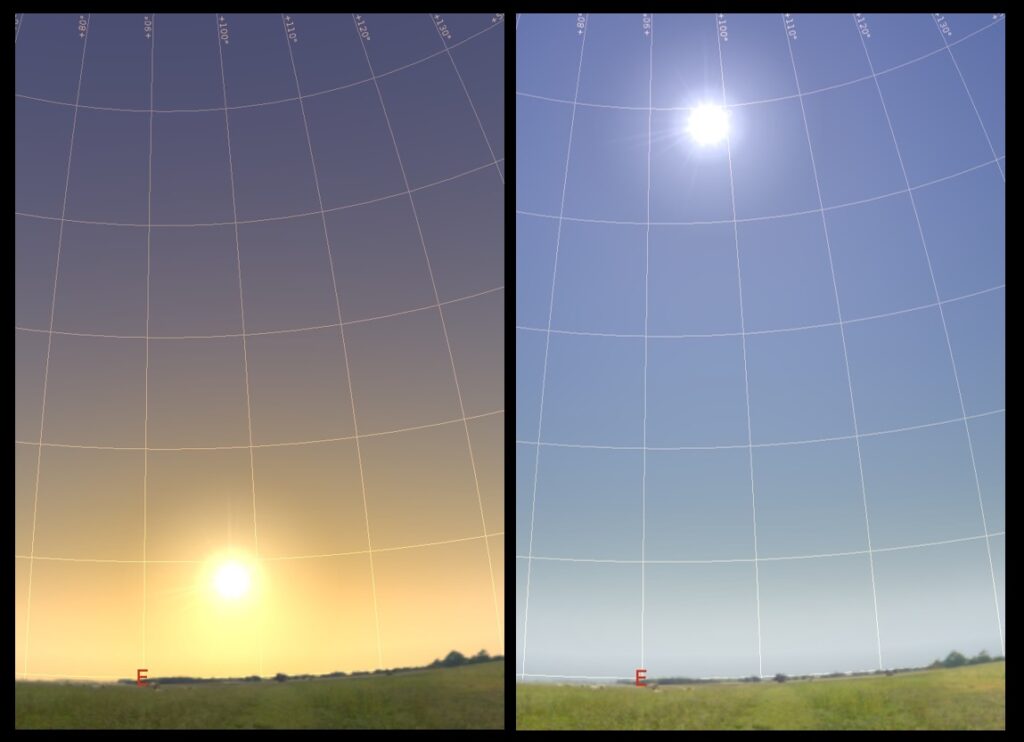 The elevation of the sun on March 18 and June 17 (simulated pictures). Both pictures show the sun when it has an azimuth angle of 8° S of E.

Diagram illustrating the path of the sun’s rays through the ‘Veritas’ window on both dates at the ‘Moment of Truth’ when the sun had an azimuth angle of 8° S of E and thus was shining straight down the nave of the church.

There are a number of items of note here. The first is that the ‘Light of Truth’ behaved exactly as calculated. It hit the center line of the church (corresponding to the sun hitting the eight degree azimuth angle) exactly at the expected times, at least to within the uncertainty involved in trying to figure out just when that ‘Moment of Truth’ was, since the blue-green circle of light did not have well-defined edges.

The second is that every March 18 the light passing through the ‘Veritas’ window will hit the center of the top of the baldachino in the manner seen here, and every June 17 it will hit the center of the aisle in the manner seen here, and it will do so at the same times. Indeed, as the days pass from the 18th of March to the 17th of June, day by day the location where that blue-green circle of light crosses the center will slowly descend the baldachino, passing over the crucifix and the tabernacle and the altar, and then it will slowly walk down the aisle toward the back of church. It will then return the way it came, day by day, during the second half of June and on into July, August, September, and October. Each day within that span of time from mid-March through early October—be that day the Feast of the Annunciation, or of St. Athanasius, or of the Most Sacred Heart of Jesus, or Sts. Joachim and Anne, or the Transfiguration, or St. Teresa of Calcutta—has its own ‘Moment of Truth’ and its own point at which the ‘Light of Truth’ strikes (just as occurs at the Kentucky Vietnam Veterans’ Memorial in Frankfort, Kentucky—a phenomenon discussed in another post).* 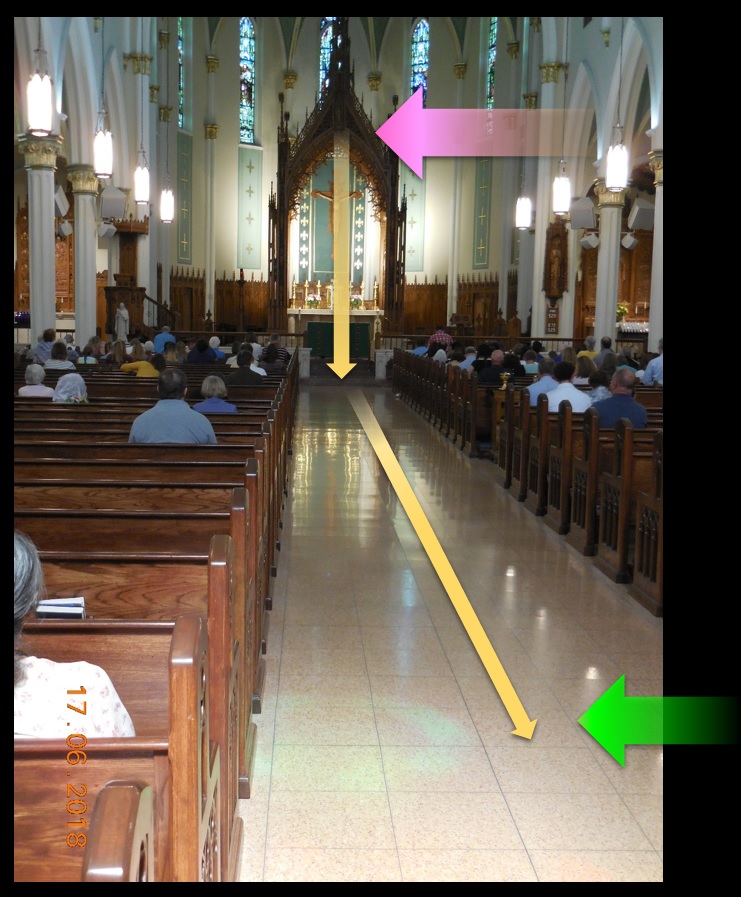 Between the 18th of March and the 17th of June, with each passing day the point at which the blue-green circle of light cast by the ‘Veritas’ window strikes the baldachino moves a little lower, and then walks down the aisle toward the back of church. The March 18 position is indicated by the pink arrow, the June 17 by the green. 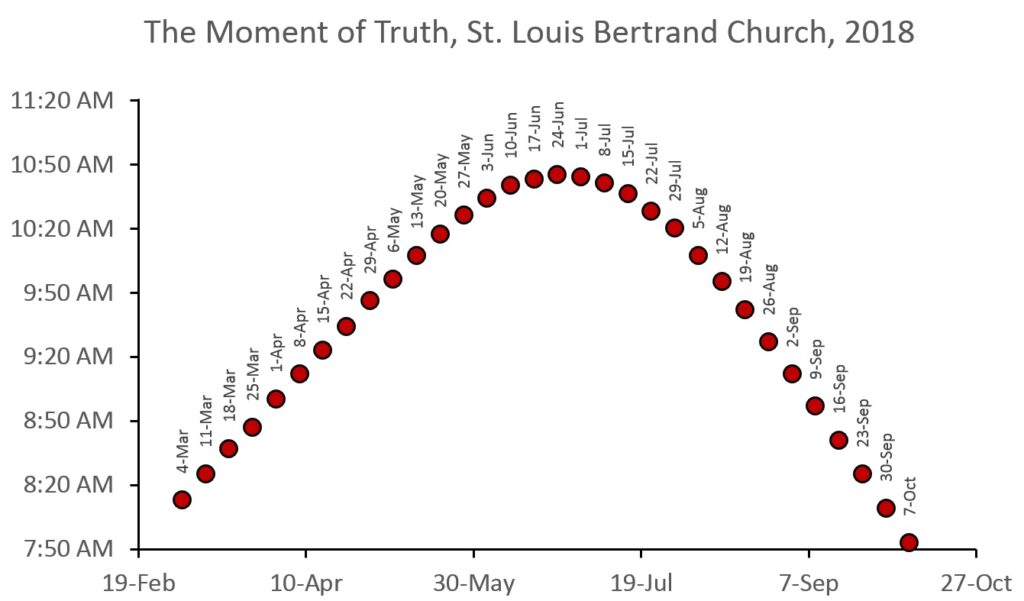 A graph of the time at which the circle of light cast by the ‘Veritas’ window shines straight down the nave of church over the course of the year. Times are Eastern Daylight Time, and only Sundays are plotted. From early October to early March the sun is not in position to shine straight down the nave.

Many churches probably see similar effects at differing times of the year—and this stuff is not limited to churches, either. All that is required is the right window placement and the right building orientation, and you too will have your own calendar-marking astronomical alignments to study. 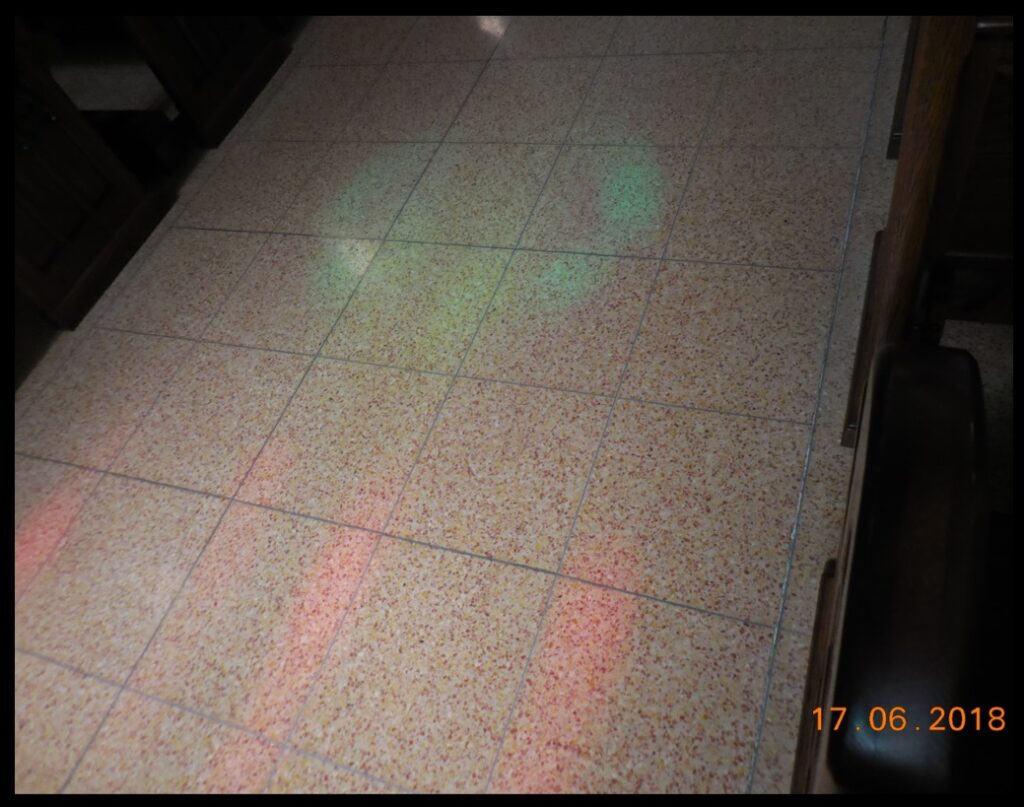 Light from the ‘Veritas’ window and other windows, at the ‘Moment of Truth’ on June 17. Note the red bands from other windows. Compare to the picture of the windows earlier in this post.

*This is true under the Gregorian calendar, which is effectively synched to the sun. The Julian calendar, which preceded the Gregorian, “drifted” slightly, so that over time the position of the sun on given days changed, with consequences for the date of Easter. Lunar calendars, such the Jewish, Islamic, Chinese and many other eastern calendars, are not synched to the sun at all.