I saw the new “Lion King” movie last month.  Whether you think it is a good movie or a bad movie, you would have to agree that it is an impressive bit of computer animation.  The artists at Disney worked hard to get so many details so realistic.  As I watched the movie, I could almost believe that animals can talk.

So why did Disney put so little realism into the sky?  As an astro-nerd, I found myself scoffing and sneering at pretty much every sky scene.  For example, I think in one shot the sun rose straight up, as though Pride Rock was close to the equator (which makes sense).  But then in another scene, the sun rose at a noticeable angle—up and to the right, as though the location were significantly further north.  And I did not recognize any constellations among the stars in the movie sky.

I can’t be sure about those two things.  I do not have a photographic memory.  I might not have been looking close enough in the case of the constellations.  And I did not pirate/record the film while in the theater, so I can’t double check!  However, the worst sky thing in the “Lion King” was something I can be sure of.  This worst thing was how the film showed oodles of stars coming out against a dark sky while another part of the sky was still light.  It even had stars coming out against a light sky.  I can be sure about this, because I found a clip of this on the web, and grabbed a screen shot.  See?  Zoom in if you need to. 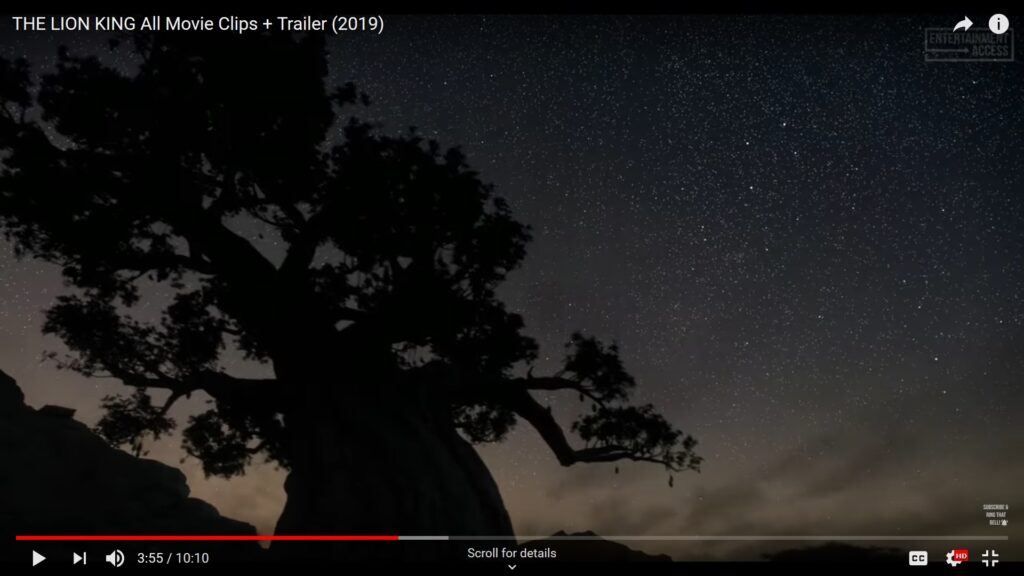 Take a look under the limbs of the tree especially, where the sky is golden in color but oodles of faint stars appear nonetheless.  This is utterly absurd.  The sky never looks anything like this.  Isn’t it strange how this movie, that features such realistic-looking animals on such a realistic-looking Earth, has such an unrealistic-looking sky?

But the lion cubs sure looked realistically cute and furry to me!  And the sky did not look realistic at all.