Today is the day of the December solstice in Louisville, Kentucky, where I live!  This is the day on which the sun reaches its southernmost point in its yearly journey through the stars (as seen from Earth), and the precise moment at which the sun reaches that point is 11:19 PM for people in Louisville.  But this moment occurs at 5:19 AM at Castel Gandolfo, the Vatican Observatory’s headquarters.  So in Italy, the solstice is on the 22nd in the early morning, while in Louisville the solstice is on the 21st at 11:19 PM.

Since the sun is now at its southernmost point, then, in the northern hemisphere, where the Vatican Observatory’s telescopes are all located, the maximum daily altitude that the sun reaches (when it is at the point halfway between rising and setting) is the lowest of the whole year.  The length of the sun’s day-long arc above the horizon is therefore shortest.  Consequently, the length of time that the sun is above the horizon is shortest, and the duration of daylight is shortest.  A sun that is low in the sky and not up for very long will not warm things much.  Thus in the northern hemisphere the December solstice is the “winter” solstice.

The sun rises in the east and sets in the west. The time between one rising and the next is 24 hours, and the sun’s motion across the sky is always at the same rate. Thus when the sun is lower in the sky (blue dashed line) its path is shorter, and it is above the horizon for less time, than when it is higher in the sky (gray dashed line).

Check out the table below, which is for Castel Gandolfo.  Note the sunrise time, sunset time, and day length.  You will see that the day length is indeed the shortest now, at 9 hr, 8 min, 38 sec, but the time of sunset is actually getting progressively later (as was discussed in the post from two weeks ago: click here for it). 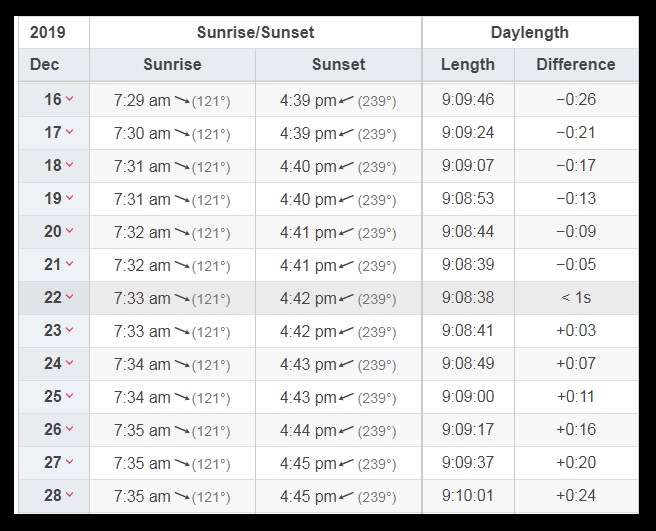 From early December through now, the days have been getting shorter, but the sun has been setting later, meaning that the evenings have been getting brighter.  Of course, the only way that could happen is if the mornings are losing daylight faster than the evenings are gaining daylight.  Now the days will start getting longer, but the mornings are still going to get darker for a while.  It is just that now the mornings will lose daylight slower than the evenings will gain daylight.  We will find out why all this happens soon enough, but for now, just keep an eye on the sky, and watch how things change in the morning and the evening.

All data in these posts are based on sunrise and sunset times provided by Date and Time.