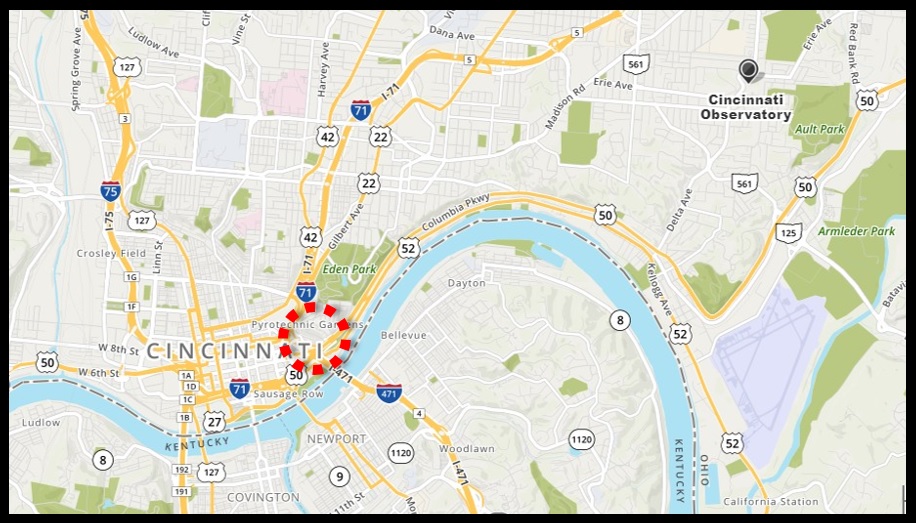 The original location of the Cincinnati Observatory on Mt. Adams is shown in red (also the location of Immaculata Church). The location to which the observatory moved is marked in black.

The observatory was moved on account of pollution.  There is a painting in the Cincinnati Art Museum that illustrates just how bad the pollution at Mt. Adams was, and how difficult it would have been to do astronomy there.  The painting is by Edward Timothy Hurley, painted in oil on canvas in 1911.  Its title is “The Midnight Mass” (it is featured on Google Arts & Culture).  It portrays Immaculata Church, which is still there on Mt. Adams. 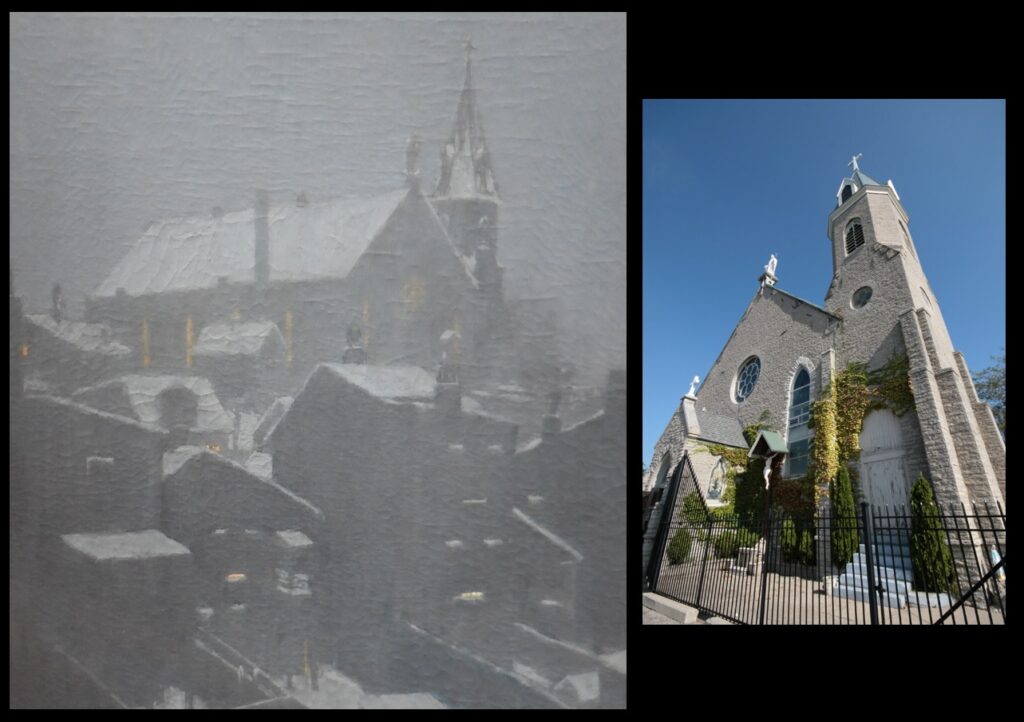 The Cincinnati Art Museum’s note on “The Midnight Mass” explains the painting’s appearance:

The city’s site on the river and its industrial pollution… created smoggy atmospheric conditions….  Painters like Hurley loved the enveloping haze of Cincinnati, which blanketed the city in quietude and elicited poetic sentiments.  Observations of the city published in Harper’s Monthly seem to describe Hurley’s painting perfectly:

The white vapors of the Ohio invade the streets, arrest and mingle with the smoke, immerse all things in obscurity, and convert the creations of architects, great and small, into noble masses, free from all smallness or meanness of detail.

Here is a longer quotation from that Harper’s article, which was published in 1883:

Cincinnati is like London. In the heat of summer or in the cold of winter you look up through the laden atmosphere and see a cheerful sphere of burnished copper doing duty for the sun. The air is filled with the wholesome carbon that is said to confer upon chimney-sweeps a complete immunity from all contagion, and which enjoys the credit of making London one of the healthiest cities in the world. Cincinnati, like London, also has its occasional river fog, when the white vapors of the Ohio invade the streets, arrest and mingle with the smoke, immerse all things in obscurity, and convert the creations of architects, great and small, into noble masses, free from all smallness or meanness of detail.

This smoke of Cincinnati is as invaluable to the eye of the disinterested artist who concerns himself with the physical aspect of the city as it is dispensable with to the Cincinnatian. Like all communities in the great valley of the West, its fuel is identical in effect with the same economical, heat-giving, and smoke-begetting coal that gives to the English town its grimy, inky hue, and to our own Pittsburgh that complexion which baffles all description. It imparts its distinctive color and a variety of quality to the Cincinnati landscape, which, considered together with the situation and topography of the town, make it one of the most picturesque of American cities. 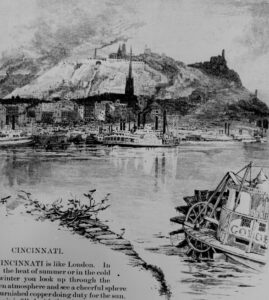 Illustration of Cincinnati from the 1883 Harper’s article, showing the riverfront and Mt. Adams.  Note the smoke drifting over the city.  Immaculata Church appears to be the one on the hill at far right,  Image courtesy of the National Archives.

No doubt it was usually impossible to do any astronomy from Mt. Adams in the later nineteenth century.  The atmospheric crud probably was even hard on the astronomical instruments (not to mention hard on human lungs and eyes).

But note the clarity of the sky in the modern photograph of Immaculata.  People can tend to look for the worst in things.  Many astronomers would scoff at the idea of observing from Mt. Adams today: It is right next to downtown Cincinnati; the light pollution is terrible!  Once upon a time, they will tell you, you could see the stars from the city.  But in fact, once upon a time you could often not see the stars from the city—indeed even the sun itself might be reduced to a “sphere of burnished copper”—and so the Cincinnati Observatory left Mt. Adams.  Now today an astronomer can observe from there: the moon, planets, and even the brighter stars can all be seen.  A century ago, even the moon would have been “immersed in obscurity” as seen from Mt. Adams.

Yes, it would be great to get rid of light pollution (and the idiotic waste of energy and money that light pollution represents) so that the skies over Mt. Adams would be truly dark and more of the heavens could be seen.  It would be great to clean up the air in the Ohio River valley even more.  And there is the high-profile issue of climate change (and the low-profile issue of trash and litter in Cincinnati neighborhoods and in the storm drains, streams, and rivers of the area—all heading downstream toward the Gulf of Mexico).  But the “The Midnight Mass” and the skies of Mt. Adams today show us two important things: first, not every thing gets worse; second, we humans actually can clean up our mess when we get a mind to do so.  Perhaps a century from now, the skies over Mt. Adams will be clearer, cleaner, and darker still.