Have you ever heard a scientific explanation for the origin of life? Carl Sagan discussed this in his famous “Cosmos” TV show, during the second episode, “One Voice in the Cosmic Fugue”:

Now, let’s take a closer look at who our ancestors were. A simple chemical circumstance led to one of the great moments in the history of our planet. There were many kinds of molecules in the primordial soup. Some were attracted to water on one side and repelled by it on the other. This drove them together into a tiny enclosed spherical shell like a soap bubble, which protected the interior. Within the bubble, the ancestors of DNA found a home and the first cell arose.

Sagan’s discussion remains current. You can find a more recent short video discussion of the origin of life by typing “origin of life” into a Google video search. You will get results something like what is seen below. The short videos consist of material from “Stated Clearly” (whose funders include NASA and the National Science Foundation), from “Khan Academy”, and from “TED-Ed”. All these are well-known sources. All say things similar to what Sagan said. 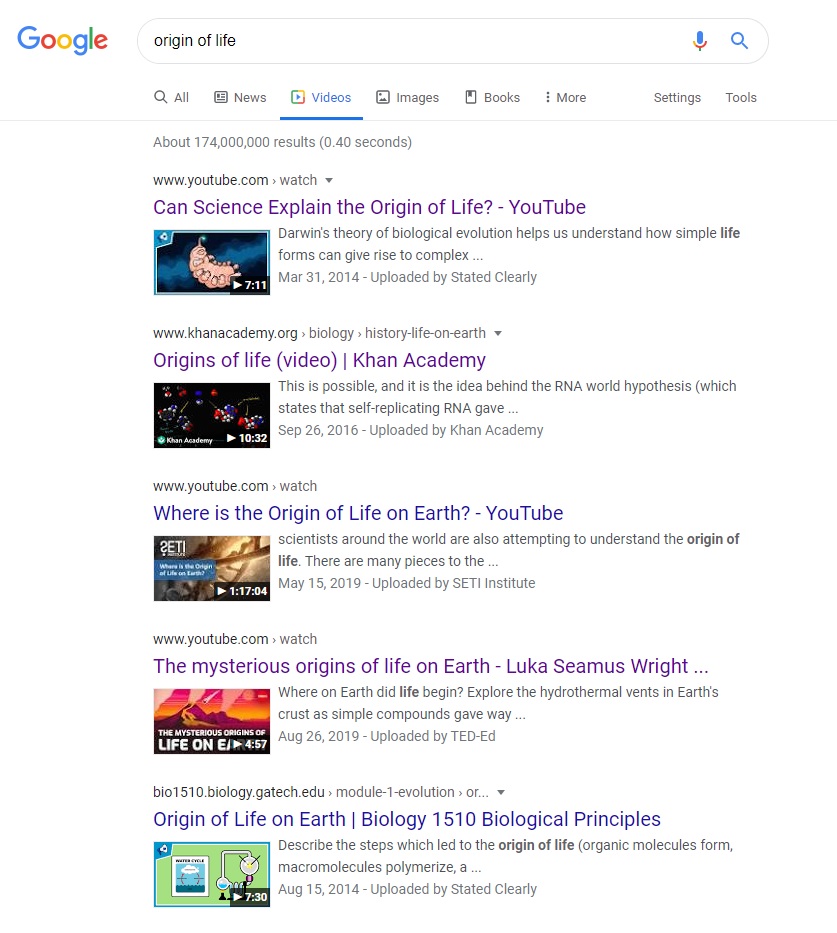 For example, in the Khan Academy video, the presenter talks first about when life might have formed, noting that originally,

Earth wasn’t very suitable for even very simple life to form, and that’s because the solar system was a crazy place. You had collisions of all scales happening all of the time. The moon itself was formed from the collision of two planet-sized objects… And even once the moon was formed, you had a heavy bombardment of things in the solar system; the solar system was a messy place. It took a long time for the stability that we now observe out there. And so that continued, we believe, until about 3.9 billion years ago, which is the earliest that we currently think that Earth might have been suitable for life.

The presenter then goes on to note that fossil evidence points to life actually existing by 3.5 billion years ago, so obviously Earth was suitable by then. But even if we can pin down a time frame for when life first arose, he continues, that does not answer the question of how life first arose. The question of “how” he says, is more important and more interesting than the question of “when”. He then talks about simple molecules like water, carbon dioxide, and ammonia; and then about amino acids and how those and other organic molecules have been found outside of Earth; and about how lab experiments have been able to show that complex organic molecules appear to form readily in certain environments. He notes that these molecules are not life, and they are not even as complex as many of the molecules that are essential for life. But, he says,

Then he gets to the question of life itself:

Now, I know what you’re thinking: ‘Alright, proteins are really cool, DNA, RNA is really cool, but then how does that become life? At what point would we start going, “That was a proto-life form?”‘

And this is where we really get into the area of the unknown because we don’t know. And there’s a couple of hypotheses out there.

One of them is called the RNA World Hypothesis… And this is the idea that the first proto-life was self-replicating RNA molecules. And the reason why people tend to focus in on RNA a little bit more than DNA is that even in cells today, RNA doesn’t just store information, it can actually play a role as a catalyst… And so maybe some of that first proto-life was RNA, information that replicated itself and catalyzed the replication of itself. Maybe it somehow got organized into membrane-bound structures so it could separate so you had environments that were separated from the outside world. But the simple answer is we don’t know.

Another mainstream hypothesis is the Metabolism First Hypothesis… And this is the idea that a lot of basic pathways that you might study in a biochemistry book… could have been happening in this primordial soup where you had these organic molecules in the right conditions, maybe around heat vents and whatever else, but the Metabolism First is that some of these mechanisms that we now study in biochemistry, these might have happened outside of a cell or outside of life, and they just kept creating more and more complexity, but at some point these things started happening in self-organizing, membrane-bound structures.

Maybe there’s some kind of combination of the two. The simple answer is we just don’t know, but there’s some fascinating clues.

So, between Sagan in the 1970s and Khan Academy in the 2010s, the general outline is the same: “primordial soup”, the conditions became right, “bubbles” or “membranes” form, and the magic happens inside. You have encountered this idea many times, I am sure. I certainly have.

Well, recently I was stunned to encounter this idea in a most unexpected place. Here is the version I encountered:

The Earth first stiffen’d and grew together, when the circumfus’d Fire of the Sun had enlighten’d, and warm’d it all around: Then, when, by reason of its being thus heated, the outmost Surface of it was in a manner fermented, some Humidities swell’d in many Places, and in them there grew certain slimy stinking Substances, involv’d in tenuious Membranes: the like to which may be seen to this Day in Fens and Marshes, where the Waters stagnate…. Now those humid Things, which we mention’d before, being animated by the Heat, receiv’d Nourishment in the Night by the Mists that fell from above: but in the Day were consolidated and harden’d by the Heat. Lastly, When they that grew in the Wombs of the Earth, had attain’d their due Growth, the Membranes, being burst and broken to pieces, disclos’d the Forms and Shapes of all Kinds of Animals.

I think this sounds a little bit like Sagan and Khan: water, heat, membranes, ooze—and the magic occurs, and life comes forth! But what was stunning was that I read this in a book from the year 1714. If you have been reading this blog for at least a couple of months, you are already somewhat familiar with that 1714 book. It is a translation of the ancient poet Lucretius’s work, Of the Nature of Things. And yet what was still more stunning to me is that this material about the membranes and all was not even from 1714. It dated to ancient times. The book’s author cites as his source Diodorus Siculus,* who lived before Christ. The 1714 author added the Siculus material in as commentary to supplement a portion of Nature of Things in which Lucretius says life spontaneously arose on Earth through the formation of wombs in the Earth that gave birth to all sorts of creatures, including both men and monsters, just as the Earth, he says, continues to spontaneously generate smaller life forms even now.

I could not believe it: the “primordial soup” idea, that we all have learned as the standard scientific explanation for the origin of life, dates back to ancient times—and it is intimately connected with the idea of spontaneous generation, a notion that has been completely abandoned by science. As the old saying goes, “knock me over with a feather”.

Now let me be perfectly clear here about a few things:

First, I am not saying that Sagan, Khan, etc. are wrong. Let it not be said that on some Vatican-related website there’s some guy who says that all this primordial soup business regarding the origin of life is a bunch of nonsense. I make no such claims. What I am saying is that, when we hear that primordial soup idea on “Cosmos” and elsewhere, it would be good to also hear that such ideas date back to the ancients; and that such ideas have connections to another idea (spontaneous generation) that science has now completely discredited.  The history of ideas is important.

Second, Khan Academy’s video repeats several times that “we don’t know”. That is good. But I would really like to hear, not just that we don’t really know the answer to the origin of life, but that our hypotheses (for which we are claiming at least some evidence) just happen to have links to wacky ideas of the ancients. (“Stated Clearly” sort of says “we don’t know”, but less definitely than Khan. “TED-Ed” does not state this at all.)

*Here is Diodorus Siculus on the origin of life (from Book , number 7 of his Bibliotheca Historica/The Library of History):

When in the beginning… the universe was being formed, both heaven and earth were in­distinguishable in appearance, since their elements were intermingled: then, when their bodies separated from one another, the universe took on in all its parts the ordered form in which it is now seen; the air set up a continual motion, and the fiery element in it gathered into the highest regions, since anything of such a nature moves upward by reason of its lightness (and it is for this reason that the sun and the multitude of other stars became involved in the universal whirl); while all that was mud-like and thick and contained an admixture of moisture sank because of its weight into one place; and as this continually turned about upon itself and became compressed, out of the wet it formed the sea, and out of what was firmer, the land, which was like potter’s clay and entirely soft. But as the sun’s fire shone upon the land, it first of all became firm, and then, since its surface was in a ferment because of the warmth, portions of the wet swelled up in masses in many places, and in these pustules covered with delicate membranes made their appearance. Such a phenomenon can be seen even yet in swamps and marshy places whenever, the ground having become cold, the air suddenly and without any gradual change becomes intensely warm. And while the wet was being impregnated with life by reason of the warmth in the manner described, by night the living things forthwith received their nourishment from the mist that fell from the enveloping air, and by day were made solid by the intense heat; and finally, when the embryos had attained their full development and the membranes had been thoroughly heated and broken open, there was produced every form of animal life. Of these, such as had partaken of the most warmth set off to the higher regions, having become winged, and such as retained an earthy consistency came to be numbered in the class of creeping things and of the other land animals, while those whose composition partook the most of the wet element gathered into the region congenial to them, receiving the name of water animals. And since the earth constantly grew more solid through the action of the sun’s fire and of the winds, it was finally no longer able to generate any of the larger animals, but each kind of living creatures was now begotten by breeding with one another.