An interesting topic to discuss with priests is their feelings about marriage preparation. Some priests feel that marriage preparation should take the shape of priestly formation, requiring multiple years of preparation for the Sacrament. Others, such as myself, take the approach that engaged couples that seek the Sacrament are doing the best they can in the situation they are in. Therefore, in the spirit of Pope Francis, the best approach is to accompany them, acknowledge that the situation a couple is in may not be ideal, but invite them to slowly move toward the ideal with God’s grace and the support of a community of faith.

Both approaches have merit. It would be wonderful if a married couple would approach the Sacrament with multiple years of formation. I even know some brother priests who have adapted this mentality in their ministry. The couples they have for marriage are very well formed theologically and embrace their faith deeply. The only problem is that these same priests are also the ones who are known for only celebrating one or two weddings a year, if that. This begs the question: If a more rigorous marriage preparation leads to hardly anyone seeking the Sacrament, is the approach really doing what it desires to accomplish?

I have been blessed with anywhere from 10-15 weddings a year. My approach is more, People have a right to marriage and if they approach me to request the Sacrament I error on the side of grace. One reason I embrace this mentality is that it is important for us, as priests, to remember that a couple has a right to marriage, but we, as priests, don’t have a right to ordination. Yes, there are impediments to marriage that would make it impossible for the Sacrament to be given. However, these issues are rare and the human person was made for marriage, inspiring me to take more of an accompaniment mentality toward marriage preparation. The downside of this approach is that I can be legitimately criticized for being too soft on couples at times, having to look hard at how many of the couples I walk with toward marriage actually practice their faith after the big day. Amid the many inflammatory attitudes about marriage in our modern culture, I think it safe to say that the questions about marriage are far more numerous than the answers. Put another way, life is messy – therefore, why wouldn’t marriage be messy?

Whether you are a priest that thinks that marriage should take on a formation model like seminary or that we should accompany our couples into a fuller understanding marriage, both mentalities would agree that without receptivity to what the Sacrament is, marriage preparation is difficult, if not impossible! This past weekend, I celebrating my first wedding at my new assignment of Saint Olaf Parish. Robert and Leah are a wonderful couple to work with, both receptive to the love they have for one another, the love of God in their lives, and the openness to continue their journey after their wedding day to embrace a loving and fruitful marriage. In short, I wish every marriage I had was as wonderful, beautiful, and open to God’s grace as Leah and Robert’s – Not only from the standpoint of the celebration it was, but the people they are becoming. 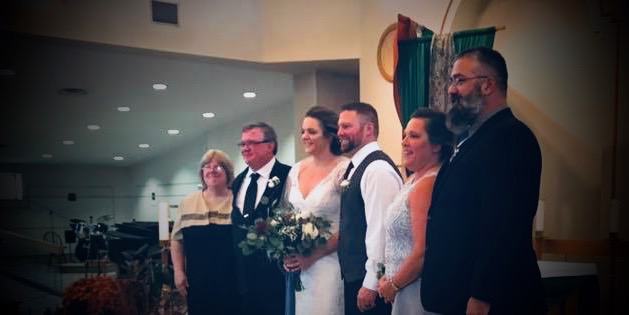 Introducing to you, Mr. and Mrs. Robert and Leah Johnston!

Now, some of you may be asking, “This is all well and good, but what does this have to do with faith and science?” Just as a couple needs a heart of receptivity to accept the grace God desires to give them, so, too, does a dialogue on faith and science need receptivity. Anytime two people enter into an argument, there is often a hardened heart that cares little about receptivity and more about establishing that “I am right and they are wrong.” I have seen situations where the heart becomes so hard that the two having an argument will actually flip positions unconsciously, simply because they can’t admit that the other person might have a point. It goes without saying, I have seen similar behavior in so-called debates between faith and science – on both sides of the issue.

This aspect of receptivity I am finding more and more a central theme of my ministry as I grow into my priesthood. You can have the best educational resources, the best teachers, the best practices for communicating the faith, but if there isn’t a heart of receptivity, the best of everything can be discarded in a moment under the mantra of, “I don’t care.”

This leads to something that I am finding more and more when approaching the supposed tension between faith and science: The real problem isn’t so much intellectual, but relational. It often surprises me when I have people I know and respect say things like, “Fr. James, why would you have friends that aren’t Catholic or even Christian?” The short answer is that Jesus was just fine hanging out with just about anyone so why shouldn’t I do the same? The more complicated answer is actually a question: Do we allow a cultural bigotry drive a wedge not only between faith and science, but between many factions of the human family?

In the United States, I fear that bigotry has become a social structure. Yes, we need to have honest and forthright discussion on core social issues that, at times, can lead to disagreement and tension. However, the culture of demonization and hate that has developed in the United States is eroding our ability to objectively embrace the old axiom – Love the sinner, hate the sin. Our culture, it seems, is embracing a new axiom – Love everyone until they disagree with you, then do everything you can to destroy their reputation and paint them as a horrible human being.

Therefore, I would put forward that the biggest obstacle to a sincere dialogue on faith and science boils down to reestablishing trust between people of different faiths, disciplines of science, and do so in a way that is rooted in mutual receptivity. Receptivity implies respect, humility, patience, and attentiveness to the thoughts and concerns of another, similar to the hearts of the couple whose marriage I witnessed this past weekend. What we often find now are examples of distrust, bunker-ism (meaning that we only spend time with those who are likeminded and attack anyone who disagrees with us), dismissing other’s thoughts and opinions before they are even known, and objectifying others as being nothing more than a collective mentality (those people that believe strange things we should ignore) versus loving expressions of God’s creative act that enrich the tapestry of creation and are deserving of love and dignity.

Spiritual Exercise: Take some time and analyze where bigotry might exist in your heart. It isn’t the most comfortable of exercises, but if we truly want to bring peace between people of faith and science and the broader culture in which we live, we need to recapture the heart of receptivity that doesn’t fear the other for being different, but embraces them as a brother or sister in Christ. Pray with that today, ask God to root out all bigotry in our lives, and may we discover a peaceable, open heart to the Lord and one another, receptive to God’s mercy and grace.